Hyder Ali or Haidar 'Ali (c. 1722 - 1782), was the de facto ruler of the Kingdom of Mysore in southern India. A soldier-adventurer, Haider Ali became one of the most formidable rivals the British ever encountered during their colonial presence in India. He is perhaps only excelled by his son, Tippu Sultan, as the champion of anti-colonial resistance. He was regarded as one of the greatest Generals to have walked the face of Asia. His father was a chief constable in the princely state of Mysore. Early military experience exposed Haider to French tactics and weapons and he began to employ European mercenaries to train and advise his troops. He formed his own company, funded by his brother (or some say with booty from war) then, after fighting for the Rajah of Mysore as a petty officer, he was commissioned as an officer in the Mysore army. By 1757, he was commander of the army. By 1761, he was minister of state and when the Rajah died in 1766 he assumed full control of Mysore. In 1764 he captured Bednor (Haidarnagar), which he made his capital. In a series of wars involving the British with some French assistance, the Marathas and the Nizam of Hyderabad he gained and lost territory, inflicted some humiliating defeats on the British but was able to hand Mysore on intact to his son. Tippu Sultan continued to oppose the British, although on his death-bed Haider had advised him to make peace. Haider Ali used diplomacy, too, to protect his Kingdom from defeat as he tried to ensure that he would not face an enemy alone. In the end, it would be Britain's use of alliances with Indian princes that led to his heir's final defeat. With his son, Haider Ali is an iconic figure in post-colonial India, Pakistan and Bangladesh because of his determination to remain free of imperial domination. His spent much of his life engaged in war but his basic desire was to protect his native kingdom of Mysore from external aggression at a time when the break-down of the old order allowed territorial opportunism to run rampant and the Marathas, the British and the Nizam vied for power.

He was the great-grandson of an Islamic fakir from Gulbarga, Deccan. His father was a naik or chief constable at Budikote, near Kolar in present-day Karnataka. He is said to have traced his lineage back to Muhammad. There is also a fort at Budikote present today at the place where he was born. He was born in 1722, or according to other authorities 1717, however the memorial in Budikote states he was born in 1720. As a youth, Hyder assisted his brother, a commander of a brigade in the Mysore Army, and acquired a useful familiarity with the tactics of the French when they were at the height of their reputation under Joseph François Dupleix. He is said to have induced his brother to employ a Parsi to purchase artillery and small arms from government of Bombay Presidency, and to enroll some thirty sailors of different European nations as gunners. He is probably the first Indian who armed a battalion with firelocks and bayonets and who used European mercenaries to advise, train and fight. She appears to have been an ensign or warrant officer at this period. He may have used booty to fund his troop.

At the siege of Devanhalli (1749) Haider deployed his battalion and attracted the favorable attention of Nanjaraja, the minister of the Rajah of Mysore. For his services, he was awarded a commission in the state army with his own independent command. Within the next twelve years, his energy and ability made him indispensable at court, so much so that in everything but name he ruled the kingdom. At first, he was deputy minister but increasingly he assumed full responsibility for administering the state. In 1757, he was placed in command of the army against a Marathan attack, which he repulsed in 1758. In recognition, the Rajah awarded him the title "Nawab Haider Ali Khan Bahadur." 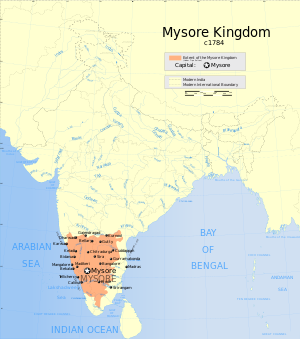 The Kingdom of Mysore in 1784, two years after Haider Ali's death when his son, Tippu Sultan was ruler.

By 1761 he had replaced Nanjaraja as minister. Nanjarajah had bankrupted the kingdom and Haider set out to replenish the treasury by conquest. Some accounts say that Haider Ali placed the Rajah under house-arrest, others that his de facto assumption of power was condoned by the ruler. He appears to have made the administration more efficient. Certainly, when the Wadiyar Rajah died in 1766, Haider Ali succeeded him but as a Muslim he was known as a Sultan, not as a Rajah. He is usually referred to as a usurper but at the time his succession does not appear to have been regarded as illegitimate. For some time, real power had been exercised by the minister of state, not by the Rajah.

Conquest of the Kanara

In 1763, he conquered Kanara, a region that had been ruled by feudal chiefs, seized their treasuries and decided to make Haidarnagar his own capital. In 1765, he inflicted a defeat against the Maratha forces on the Malabar coast, then conquered Calicut. He now attracted the attention of the British in Madras, who in 1766 entered an agreement with the Nizam of Hyderabad and with the Marathas to supply with troops to use against their common enemy. Haider Ali, however, learning of this triple-alliance against him thwarted the plan by inducing the Marathas to defect (he paid them off). Haider Ali was skillful in building up his military capacity, actually dominating "the market for horses, cannon and foreign military officers - especially the French, who trained his troops in Western techniques."[1]

Instead, he took Mangalore and inflicted a humiliating defeat on the British Bombay army. However, the British struck back and consequently Haider lost a fleet he had just built as well as forts on the western coast. Quite willing to engage in diplomacy, he sued for peace. When the British declined, he again drew on his military skill to reverse the situation, taking his army to within a few miles of Madras and breaking a British siege at Bangalore. By April 1769 the British were willing to enter a treaty of mutual protection, which meant that if the Marathas retaliated for their earlier defeat, the British would help. If the British were attacked, he would assist. Haider's position was so strong that it was he who drew up the terms of the treaty, which included the restoration by both sides of territory taken. He knew that he could not buy them off for very long. He also entered a commercial pact with the Bombay Presidency. This ended what has been called the First Anglo-Mysore War of 1767-1769.

In 1771, the Maratha did attack and Haider Ali discovered that the British did not always keep their word. They failed to send troops. Stung by this treatment, he turned aside from diplomatic dealings with the English, instead seeking an alliance with the French. Seeing an opportunity to regain their position in India, the French responded positively. In 1779, he recruited additional European mercenaries and employed French advisers. He turned to the Nizam of Hyderabad and to the Maratha to form, with the French, an anti-British alliance. He was further enraged when the British occupied the town of Mahé, which was a French concession but within his jurisdiction. They had requested permission to take the town from the French but Haider had refused. The following year he again waged war, gaining territory in the Carnatic and inflicting another defeat on the British in a battle on September 10th. Known as the Second Anglo-Mysore War, Haider took Arcot from the British that October. The British responded by again inducing the Nizam and the Marathas to desert Haider, which enabled them to win a series of battles against him during 1781 at Porto Novo, Pollilur, and Sholinghur. At the first of these conflicts, Hyder lost at least 10,000 men. Aided by the French, his son Tippu Sultan led an attack on the British in 1782 at the Coleroon River, where they defeated a small British contingency. Warren Hastings, the British Governor-General then sent a fleet to attack Haider's coastal possessions.

Although he sent Tippu to seek French help, this did not materialize before his sudden death, from cancer, in 1782. The French did see this as an opportunity to regain their position in India but were unable to deploy enough troops to make a real difference to the outcome of the war. Haider Ali is said to have advised Tippu, his son by Fakhr-un-nissa (Fatima Begum), to make peace with the British but this did not happen and Tippu continued the anti-colonial resistance until his death during the Battle of Seringapatam. in 1799, which represented the last major resistance to British rule until the First War of Indian Independence in 1857-8. Haider's advice to Tippu to make peace was based on his assessment that their sea-power was too great to resist. When Tippu died, the throne of Mysore reverted to the heir of the Hindu dynasty.

Although he is remembered mainly as a military commander, Haider Ali was also a competent civilian administration. As a Muslim ruling a Hindu-majority state, he was careful to govern as a secular ruler, honoring freedom of religion and Hindu legal tradition. He built roads, laid out gardens and fortified Bangalore and Seringapatam (where his son would make his last stand in 1799). He began the modernization of the administration and the restored Wadiyar dynasty, under British direction, continued this process on which his son had also built to a considerable extent.

Haider Ali]s legacy is almost always referred to as one of resistance to imperialism and as the source of inspiration to those who in later generations led the movement for India's independence. Yet he also restored order and an efficient administration to a kingdom, which he left intact for his heir. He lived in a time of change in India as the old order was passing away and when the new, colonial order was not yet fully established. Tippu Sultan is also celebrated as a hero of the resistance but like his father he is also remembered as having administered his kingdom with efficiency and skill. Under Tippu, Mysore reached the zenith of its military power. Sajoo comments that of all India's rulers, it was father and son Haider Ali and Tippu Sultan who did more than anyone else to resist colonialism in India.[2]

Retrieved from https://www.newworldencyclopedia.org/p/index.php?title=Haider_Ali&oldid=1082403
Categories:
Hidden category:
This page was last edited on 16 October 2022, at 14:46.
Content is available under Creative Commons Attribution/Share-Alike License; additional terms may apply. See Terms of Use for details.