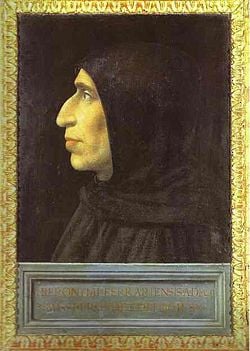 Girolamo Savonarola (September 21, 1452 – May 23, 1498), also translated as Jerome Savonarola or Hieronymus Savonarola, was an Italian Dominican priest and leader of Florence from 1494, until his execution in 1498. He was known for religious reformation, anti-Renaissance preaching, book burning, and destruction of art. He vehemently preached against what he saw as the moral corruption of the clergy, and his main opponent was Pope Alexander VI. He is sometimes seen as a precursor of Martin Luther, though he remained a devout and pious Roman Catholic his whole life.

In his youth, he was preoccupied with religion, studying both the Bible and Aristotle. Savonarola initially studied at the University of Ferrara, where he appears to have taken an advanced Arts degree. His anti-clerical stance was initially manifested in his poem on the destruction of the world entitled De Ruina Mundi, written at the age of 20. It was at this stage that he also began to develop his moral voice, and in 1475, his poem De Ruina Ecclesiae displayed his contempt of the Roman Curia by terming it "a false, proud whore." 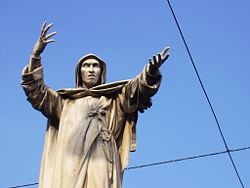 Statue in his birthplace, Ferrara, Italy.

Savonarola became a Dominican friar in 1474, and entered the convent of San Domenico in Bologna. He immersed himself in theological study, and in 1479, transferred to the convent of Santa Maria degli Angeli. Finally, in 1482, the Order dispatched him to Florence, the "city of his destiny." Savonarola was lambasted for being ungainly, weak, and a poor orator. He made no impression on Florence in the 1480s, and his departure in 1487, went unnoticed. He returned to Bologna, where he became "master of studies." Savanorola returned to Florence in 1490, at the behest of Count Pico della Mirandola, where his zealous and impassioned preaching began to draw attention.

At this time the Roman Catholic Church's clergy was increasingly corrupting morality, leading corrupt lives themselves. The Papacy was filled with abuses and personal immorality; and friars, in most every district, were sometimes traveling peddlers of indulgences. Savonarola's grief over these sins caused him to withdraw more from his secular studies. Instead, he concentrated closely on the Bible and Church Fathers, which became his constant companion and guide. In 1491, he became prior at the Church of St. Mark in Florence, which was always crowded to excess. His impassioned discourses brought about a social reform which has never been duplicated in history. Savonarola was not a theologian. He did not proclaim doctrines. Instead, he preached that Christian life involved being good rather than carrying out displays of excessive pomp and ceremonies. He did not seek to make war on the Church of Rome. Rather, he wanted to correct its transgressions.

Oddly, Lorenzo de Medici, the previous ruler of Florence and patron of many Renaissance artists, was also a former patron of Savonarola. It has been said Lorenzo called for Savonarola on his death bed in 1492, and the Friar did attend. Eventually, Lorenzo and his son Piero de Medici became the target of Savonarola's preaching.

It is said that Savonarola predicted several key events, such as the invasion of Italy by a foreign king and the deaths of Lorenzo de Medici and of Pope Innocent VIII.

After Charles VIII of France had invaded Florence in 1494, the ruling Medici were overthrown and Savonarola emerged as the leader of the city. He set up a rather modern democratic republic in Florence. During this period, he sought the reform of the Christian life, and proceeded to police the morality of the people.

In 1497, he and his followers carried out the Bonfire of the Vanities. They sent boys from door to door collecting items associated with moral laxity: Mirrors, cosmetics, lewd pictures, pagan books, sculptures, gaming tables, chess pieces, lutes and other musical instruments, fine dresses, women's hats, and the works of immoral poets, and burnt them all in a large pile in the Piazza della Signoria of Florence.[1] Fine Florentine Renaissance artwork was lost in Savonarola's notorious bonfires, including paintings by Sandro Botticelli thrown on the pyres by the artist himself.

Florence soon became tired of Savonarola's hectoring. During his Ascension Day sermon on May 4, 1497, bands of youths rioted, and the riot became a revolt: Taverns reopened, and men gambled publicly.

On May 13, 1497, Savonarola was excommunicated by Pope Alexander VI, and in 1498, Alexander demanded his arrest and execution. On April 8, a crowd attacked the convent of San Marco; a bloody struggle ensued, during which several of Savonarola's supporters were killed: He surrendered along with Fra Domenico da Pescia and Fra Silvestro, his two closest associates. Savonarola was charged with heresy, uttering prophecies, sedition, and religious error.

During the next several weeks all three were tortured on the rack. All three signed confessions; the torturers spared only Savonarola's right arm, in order that he might be able to sign his confession, which he did sometime prior to May 8. On that day he completed a written meditation on the Miserere, Psalm 51, entitled Infelix ego, in which he pleaded with God for mercy for his physical weakness in confessing to crimes he believed he did not commit. On the day of his execution, May 23, 1498, he was still working on another meditation, this one on Psalm 31, entitled Tristitia obsedit me.[2]

On the day of his execution, he was taken out to the Piazza della Signoria along with Fra Silvestro and Fra Domenico da Pescia. The three were ritually stripped of their vestments, degraded as heretics and schismatics, and given over to the secular authorities to be burned. The three were hanged in chains from a single cross; an enormous fire was lit beneath them; they were thereby executed in the same place where the Bonfire of the Vanities was lit, and in the same manner that he had condemned others. Jacopo Nardi, who recorded the incident in his Istorie della città di Firenze, wrote that his executioner lit the flame exclaiming, "The one who wanted to burn me is now himself put to the flames." Luca Landucci, who was present, wrote in his diary that the burning took several hours, and that the remains were several times broken apart and mixed with brushwood so that not the slightest piece could be later recovered, as the ecclesiastical authorities did not want Savonarola's followers to have any relics. The ashes of the three were afterwards thrown in the Arno River beside the Ponte Vecchio.[3]

Niccolò Machiavelli, author of The Prince, also witnessed and wrote about the execution. The Medici subsequently regained control of Florence. 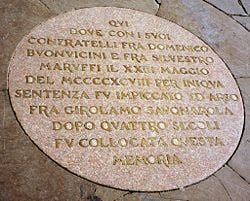 A plaque commemorates the site of Savonarola's execution in the Piazza della Signoria, Florence.

Savonarola was supposedly intense, fervent, and electrical in personal appearance. He can be compared to Luther in his denunciation of sin but was unlike the German monk in following out logical conclusions. It can be speculated that had he lived a generation later he might have achieved a revolution in the Church as great as that of Luther. However, Savonarola was convinced of the truth of Catholic doctrine, and unlike Luther, concentrated on purging the Church from immorality, not from supposedly unsound doctrine.[4]