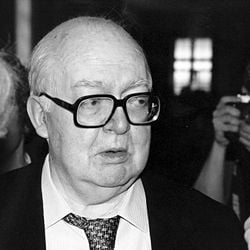 Friedrich Dürrenmatt (January 5, 1921 – December 14, 1990) was a Swiss author and dramatist. He was a proponent of epic theater whose plays also share some similarities with the "Theater of the Absurd." His work represents a comic response to the essentially tragic nature of modern life, a view that reflected the recent experiences of World War II. His work was significant for the post-war German theater's revival.

Epic theatre assumes that the purpose of a play, more than entertainment or the imitation of reality, is to present ideas and invite the audience to make judgments on them. Characters are not intended to mimic real people, as in the realistic theater tradition it preceded, but to represent opposing sides of an argument, archetypes, or stereotypes. The audience should always be aware that it is watching a play, and should remain at an emotional distance from the action. Bertold Brecht (originator of epic theater) described this ideal as the Verfremdungseffekt—variously translated as "alienation effect," "defamiliarization effect," or "estrangement effect." It is the opposite of the suspension of disbelief and identification with the characters. "It is most important that one of the main features of the ordinary theatre should be excluded from [epic theater]: the engendering of illusion."[1]

Dürrenmatt was a politically active author who gained fame largely due to his avant garde dramas, philosophically deep crime novels, and often macabre satire. He was a member of the Gruppe Olten, a group of Swiss authors who supported socialism and advocated political change.

Dürrenmatt was born on January 5, 1921, in Konolfingen in the Emmental in the canton of Bern, Switzerland, the son of a Protestant pastor. His grandfather was the conservative politician Ulrich Dürrenmatt. The family moved to Bern in 1935. Dürrenmatt began a study of philosophy and German language and literature at the University of Zürich in 1941, but dropped out after only one semester. He continued his studies at the University of Bern.

In addition to his primary work as a dramatic writer, Dürrenmatt was also an illustrator. He created illustrations for some of his own works, and his drawings were exhibited in Neuenburg in 1976 and 1985, as well as in Zürich in 1978.

Like Brecht, Dürrenmatt explored the dramatic possibilities of epic theater. His plays are meant to involve the audience in a theoretical debate, rather than as purely passive entertainment.

When he was 26, his first play, It Is Written, premiered to great controversy. The story of the play revolves around a battle between a sensation-craving cynic and a religious fanatic who takes scripture literally, all of which take place while the city they live in is under siege. The play's opening night in April 1947 caused fights and protests in the audience.

His first major success was the play Romulus the Great. Set in the year 476 C.E., the play explores the last days of the Roman Empire, brought about by its last emperor.

The Visit (Der Besuch der alten Dame, 1956) which tells of a rich benefactor visiting her beneficiaries, is the work best known in the United States. The satirical drama The Physicists (Die Physiker, 1962) which deals with issues concerning science and its responsibility for dramatic and even dangerous changes to our world has also been presented in translation.

The two late works "Labyrinth" and "Turmbau zu Babel" are a collection of unfinished ideas, stories, and philosophical thoughts.

The Visit is the title of various English translations of Friedrich Dürrenmatt's 1956 play Der Besuch der alten Dame (literally, "The Visit of the Old Lady"). It is probably the most well-known of his works, at least in the English-speaking world. The play deals with the themes of punishment, greed, revenge, and moral strength.

The play centers on the fictional German town of Güllen, which was once a vibrant center of culture but has in the past few decades decayed into near-bankruptcy. When the play opens, the town is preparing a celebration of the arrival of Claire Zachanassian, a former resident who had since attained a great fortune and is coming back to visit.

She arrives with her fiancé (throughout the play, she has several husbands—often played by the same actor—and it is mentioned repeatedly that she has had many more), and after some general festivities on the part of the townspeople she announces the true reason she has visited: when she was young she was impregnated by her lover Alfred Ill, who, at the paternity suit, denied the charges, bribing two drunks to testify that they were the fathers, and she was shamed out of the town. Now that she has become rich, she will give the town one billion pounds if they kill Alfred Ill, who over the years became one of Güllen's most popular persons. Even though Güllen is said to be situated in Central Europe, Claire Zachanassian presents her reward in pounds, so that the town is kept as an anonymous location in Europe that is detached from the real world.

The townspeople unanimously refuse to do so—but soon they start to buy things on credit—expensive things, even from Ill's own store—as if they expect some new source of income in the future. Ill notices this and becomes troubled. The townspeoples' rhetoric of support behind Ill slowly begins to change.

Residents of the town begin to realize that they cannot continue to spend this way as long as Ill is alive, and they begin to hope he dies of causes more natural than murder. But Zachanassian continues to believe that someone can be persuaded by money, and eventually she is proven correct. The town’s schoolteacher gives in, commits the crime, is put on trial and sentenced to death. Zachanassian gives the mayor the check for the billion pounds, who proclaims justice was served. The dark tone suddenly gives way to a prosperous, cheerful ending on behalf of the townspeople, which underscores the main themes of the play.

Ironically, the only person who truly grieves Ill's passing is not Ill's wife and children, but Zachanassian herself. The revenge she sought for years was finally fulfilled, but she is left unsatisfied.

The play is written in a kind of resigned, slow manner that reflects the state of the town after their gradual ruin (which is revealed around the middle of the play to have been intentionally brought on by Zachanassian). It is generally seen as a treatise on corrupting influence of money, but there is a lot of potential in the play for varying interpretations, both in meaning and in production. It remains, nearly fifty years after its writing, a mainstay of Western theater.

The author often emphasized that The Visit is intended first and foremost as a comedy. However, it is difficult to ignore the serious and usually dark points being made about human nature throughout the play. A popular method of bringing up concerns important to German language authors of this period was through their use of unsettling humor of this type.

The fundamental underlying point of the play is that money can buy anything. As the arrival of Zachanassian shows, the promise of money can lead people to hate and even murder. It can pervert the course of justice, and even turn the local teacher, who is one of the few who manage to warn Ill of his impending doom. The teacher is a self-declared humanist and his moral collapse, as well as that of the priest, demonstrates the power of money to overcome both religious and secular morality.

For viewers and readers of this work it is difficult to judge which of the two, Claire Zachanassian or Alfred Ill, has done more wrong.

The play was adapted as an opera libretto by the author and set to music by composer Gottfried von Einem, entitled Der Besuch der alten Dame and translated as The Visit of the Old Lady, and was first performed in 1971.

Ingrid Bergman and Anthony Quinn starred in a much-altered film adaptation, also called The Visit, directed by Bernhard Wicki, in 1964.

The plot was used for Kander and Ebb's musical The Visit, which received its first production at Chicago's Goodman Theatre in 2001.

This play was also turned into a film in 1992 by Djibril Mambety from Senegal.

In 1990, Dürrenmatt gave two famous speeches, one in honor of Václav Havel (Die Schweiz, ein Gefängnis? / “Switzerland as Prison?”), and the other in honor of Mikhail Gorbachev (Kantos Hoffnung / “Kant's Hope”). Dürrenmatt often compared the three Abrahamic religions and Marxism, which he also saw as a religion.

Even if there are several parallels between Dürrenmatt and Brecht, Dürrenmatt never took a political position, but represented a pragmatic philosophy of life. In 1969, he traveled in the United States, in 1974 to Israel, and in 1990 to Auschwitz in Poland.

Dürrenmatt died on December 14, 1990 in Neuchâtel.