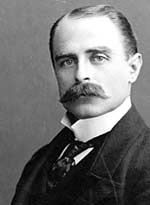 Lieutenant Colonel Sir Francis Edward Younghusband (May 31, 1863 - July 31, 1942) was a British Army officer in India, explorer, and spiritualist. Dubbed by one biographer as “The Last Great Imperial Adventurer,” he is remembered chiefly for his travels in the Far East, especially for his mission to Tibet and Central Asia in 1902-4, and his writings on the subject. He negotiated the Anglo-Tibetan Treaty (1904), for which he was knighted. He was the first foreigner to enter Lhasa. He also served as British Resident in the princely state of Kashmir. Having won the Gold Medal of the Royal Geographical Society in 1891, he was President of the Society during 1919. In 1936 he founded the oldest inter-faith organization in the world, the World Congress of Faiths. In 1924, he gave the opening address at the Religions of Empire Conference, part of the British Empire Exhibition. In 1901, he was a co-founder of the Royal Society for Asian Affairs. In 1917, he was created Knight Commander of the Star of India.

As an infant, Francis was taken to live in England by his mother. When Clara returned to India in 1867 she left her son in the care of two austere and strictly religious aunts. In 1870 his mother and father returned to England and reunited the family. In 1876 at age thirteen Francis entered Clifton College, Bristol. In 1881 he entered the Royal Military Academy Sandhurst and in 1882 he was commissioned as a subaltern in the 1st King's Dragoon Guards.

In 1886, on leave from his regiment, Younghusband made an expedition through Manchuria, crossing the Gobi Desert and pioneering a route from Kashgar and India through the uncharted Mustagh Pass. For this achievement he was elected the youngest member of the Royal Geographic Society and received the society's gold medal.

The Great Game and the Hunza Valley

In 1889, Younghusband was dispatched with a small escort of Gurkha soldiers to survey an uncharted region of the Hunza valley and the Khunjerab Pass through the Karakoram mountain range. Whilst encamped in a remote area of Hunza, Younghusband received a messenger at his camp, inviting him to dinner with Captain Gromchevsky, his Russian counterpart in "The Great Game." Younghusband accepted the invitation to Gromchevsky's camp, and after dinner the two rivals talked into the night, sharing brandy and vodka, and discussing the possibility of a Russian invasion of British India. Gromchevsky impressed Younghusband with the horsemanship skills of his Cossack escort, and Younghusband impressed Gromchevsky with the rifle drill of his Gurkhas. After their meeting in this remote frontier region, Gromchevsky resumed his expedition in the direction of Kashmir and Younghusband continued his exploration of Hunza.

Transfer to the political service

In 1890, Younghusband transferred to the Indian Political Service. He served as a political officer on secondment from the British Army. Then a Major, He served as British commissioner to Tibet from 1902-1904. In 1903-1904, under orders from the Viceroy of India, Lord Curzon, he, jointly with John Claude White, the Political Officer for Sikkim, led a military mission to Tibet as a result of disputes over the Sikkim-Tibet border; the mission controversially became a de facto invasion and British forces occupied Lhasa. The British force was supported by King Ugyen Wangchuck of Bhutan, who was knighted in return for his services.

Younghusband was also created a Knight Commander of the Indian Empire (KCIE), of which he was already a Commander (CIE). Edinburgh University made him an honorary doctor of law (1905), followed by Cambridge University and Bristol University.

In 1906 Younghusband settled in Kashmir as the British representative. His father’s death in 1907 prompted him to seek early retirement in order to pursue his spiritual goals. He left India in December, 1908.

World War I and active retirement

In England, he became an active member of many clubs and societies. During World War I his patriotic Fight for Right campaign commissioned the song Jerusalem. He was elected President of the Royal Geographic Society in 1919. Later he actively encouraged climbers, including George Mallory, to attempt the first ascent of Mount Everest, and they followed the same initial route as the earlier Tibet Mission. He visited India again in 1937. In 1938 he encouraged Ernst Schäfer, who was about to lead a German expedition to Tibet, to "sneak over the border" when faced with British intransigence towards Schäfer's efforts to reach Tibet.[1]

Between 1920 and 1930, Younghusband published ten books. In addition to accounts of his travels, he wrote of his mystical ideas in such works as The Light of Experience (1927) and The Coming Country (1929).

Younghusband's religious upbringing had a profound influence on his later life. In 1884 he wrote in his diary that "I shall through my life be carrying out God's Divine message to mankind." Later, recovering from an accident, he would read Leo Tolstoy's The Kingdom of God is Within You - a book which also greatly influenced Mahatma Gandhi [2]

The day after leaving Lhasa I went off alone to the mountainside, and there gave myself up to all the emotions of this eventful time. Every anxiety was over - I was full of good-will as my former foes were converted into stalwart friends. But now there grew up in me something infinitely greater than mere elation and good-will. Elation grew to exultation, exultation to an exaltation which thrilled through me with overpowering intensity. I was beside myself with untellable joy. The whole world was ablaze with the same ineffable bliss that was burning within me. I felt in touch with the flaming heart of the world. What was glowing in all creation and in every single human being was a joy far beyond mere goodness as the glory of the sun is beyond the glow of a candle. A mighty joy-giving Power was at work in the world - at work in all about me and at work in every living thing. So it was revealed. Never again could I think evil. Never again could I bear enmity. Joy had begotten love. [3].

It was in retirement that Younghusband set out to find ways of expressing his conviction that all people, regardless of race or faith, are vessels through which the divine works in the world. He believed both in human equality and in the presence of truth, and of a spark of the divine, in all the great religions of the world. From his time in Tibet, he developed a particular interest in Buddhism. An important opportunity presented itself during the British Empire Exhibition in 1924, when the decision was taken to include a Religions of Empire Conference as part of the program. Younghusband was invited to deliver the opening address. Following the conference, with the Conference Chair, Sir Denison Ross and others, Younghusband co-founded the Society for Promoting the Study of Religions. In 1936, following several years of preparatory work, Younghusband hosted what became the World Congress of Faiths. The opening Congress brought together some of the most distinguished religious scholars and leaders in the world, including the Buddhist D. T. Suzuki, Yusif Ali, translator of the Qur’an, the Aga Khan, the British Chief Rabbi and many others. Younghusband himself stressed that he did not anticipate a single, eclectic religion not did he advocate the evaluation of the strength and weakness of any religion but to encourage an understanding of “world-consciousness” and to deepen our own faith by learning more about the faith of others. Younghusband argued, says Braybrooke, that “that through discussion and reflection, the conception of God grew greater and that by coming closer to each other, members of different religions deepened their own spiritual communion” [4].

Younghusband married Helen Magniac on August 11, 1897. Their first child, Charles, died in infancy. Their daughter, Eileen, later Dame Eileen (1902-1981) was pioneered social work training in the United Kingdom. Lady Helen suffered from mental illness in her later life. Younghusband, for the last two years of his own life, had a romantic liason with Lady Madeline Lees Blanked, a married women and mother of eight.

The World Congress of Faiths remains active as a membership-based association. Many distinguished scholars of religion and religious leaders have taken part in its programs. Younghusband is acknowledged as an important pioneer of the inter-faith movement. He believed that improved understanding of the world’s faiths would contribute not only in deeper personal spiritual awareness but in a more peaceful, just and humane world.