A fire alarm system is an active fire protection system that detects fire or the effects of fire. In so doing, it provides one or more of the following services: it notifies the occupants, notifies persons in the surrounding area, summons the fire service, and controls all the fire alarm components in a building.

Fire alarm systems can include alarm initiating devices, alarm notification appliances, control units, fire safety control devices, annunciators, power supplies, and wiring. These systems have helped save millions of lives. One drawback, however, is that such a system can be disrupted by deliberate false alarms. 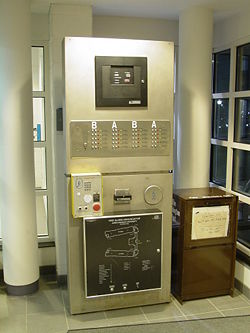 A fire alarm system is composed of components which can be classified into the following categories.

Fire alarm systems have devices connected to them to detect the fire/smoke or to alert the occupants of an emergency. Below is a list of common devices found on a fire alarm.

The design of the overall goals, general system type, and integration into the other facility systems (active fire suppression, HVAC, lighting, electrical power, fire barriers, etc.) is performed by competent engineers with experience in fire protection, who are licensed within the geographical area of practice, such as a U.S. state or a Canadian province. This is done in conjunction with the architect’s design team during the design phase of the building project. The detailed component selection and layout is provided by a technician as hired by the contractor during the construction phase. In the United States, that person is usually certified for fire alarm design by the National Institute for Certification of Engineering Technologies (NICET).

The design is typically provided in compliance with the model building codes having jurisdiction in that area. In the United States, NFPA 72, The National Fire Alarm Code, is usually used for the installation methods, testing and maintenance. Property insurance company recommendations are also sometimes incorporated.

Extensions of existing systems is done considering the original system, and more than likely will be proprietary to match the existing equipment.

The rationale behind audio evacuation systems is, though conventional fire alarm notification devices alert occupants of a building of the presence of an emergency, they do not provide detailed information to the occupants, such evacuation routes or instructions. The problem lies in buildings where there are large amounts of frequently changing occupants who are not necessarily familiar with the locations of emergency exits or stairwells. These types of buildings are designated in model building codes as "areas of assembly," such as buildings with a capacity of three hundred or more people, but voice evacuation rules usually only apply when the occupant load exceeds one thousand persons. Areas of assembly include churches, movie theaters, auditoriums, department stores, restaurants, shopping malls, airports and museums. Additionally, such a system is usually intergrated with a fire telephone or paging system, which permits the fire department or building manager to give specific evacuation instructions pertinent to current conditions in real time.

Many audio evacuation systems permit multiple messages. For instance, "non fire" messages can be programmed for situations such as a hazardous material spill, gas leaks, security breaches, severe weather, and so forth.

In the United States, audio evacuation is now required in many jurisdictions for new structures that are classified as an area of assembly, as well as in new high rise buildings and skyscrapers. Retrofitting older structures is not required, although new fire alarm installations can be required to have audio capabilities. Similar trends are occurring in other countries as well.

Retrieved from https://www.newworldencyclopedia.org/p/index.php?title=Fire_alarm_system&oldid=975391
Categories:
Hidden category:
This page was last edited on 23 October 2013, at 16:00.
Content is available under Creative Commons Attribution/Share-Alike License; additional terms may apply. See Terms of Use for details.