Elizabeth Cleghorn Gaskell (née Stevenson; September 29, 1810 – November 12, 1865), often referred to simply as Mrs. Gaskell, was an English novelist and short story writer during the Victorian era. She is perhaps best known for her biography of Charlotte Brontë. Her novels offer a detailed portrait of the lives of many strata of society, including the very poor, and as such are of interest to social historians as well as lovers of literature.[1]

Gaskell was born Elizabeth Stevenson on September 29, 1810, at 93 Cheyne Walk, Chelsea, which was then on the outskirts of London. Gaskell was the eighth, and last, of her parent's children, the only one except the first-born, John (born 1806), to survive infancy. Her father, William Stevenson, was a Scottish Unitarian minister at Failsworth, near Manchester. He resigned his orders on conscientious grounds, moving his family in 1806 to London with intentions of going to India after he had been named private secretary to the Earl of Lauderdale, who was to become Governor-General of India. This position did not materialize and Stevenson was instead nominated Keeper of the Treasury Records. Stevenson's wife, Elizabeth Holland, came from a prominent Midlands family that was well-connected with other Unitarian and prominent families like the Wedgwoods, the Turners and the Darwins, and when she died three months after giving birth to Gaskell she left a bewildered husband who saw no other alternative for young Elizabeth but to be sent away to live with her mother's sister Hannah Lumb, in Knutsford, Cheshire.[2]

Gaskell's future situation while growing up was very uncertain as she had no personal wealth, and no firm home, even though she was a permanent guest at her aunt and grandparents house. Her father had married again to Catherine Thomson in 1814 and by 1815 the couple already had a male heir, William (born 1815) and a daughter, Catherine (born 1816). Although Gaskell would sometimes spend several years without seeing her father and his new family, her older brother John would often visit her in Knutsford. John had been early destined for the Royal Navy, like his grandfathers and uncles, but he had no entry and had to go into the Merchant Navy with the East India Company's fleet of ships.[3]

John would go missing in 1827 during an expedition to India. Gaskell's father remained in London where he married and fathered other children.

Much of Elizabeth's childhood was spent in Cheshire, where she lived with an aunt, Hannah Lumb, in Knutsford, a town she would later immortalize as Cranford. They lived in a large redbrick house, Heathwaite, on Heathside (now Gaskell Avenue), which faces the large open area of Knutsford Heath.

She also spent some time in Newcastle upon Tyne (with Rev. William Turner's family) and Edinburgh. Her stepmother was a sister of the Scottish miniature artist, William John Thomson, who painted the famous 1832 portrait of Gaskell in Manchester. Also during this period, Gaskell met and married William Gaskell, the minister at Cross Street Unitarian Chapel, who had a literary career of his own. They honeymooned in North Wales, staying with Elizabeth's uncle, Samuel Holland, who lived near Porthmadog. 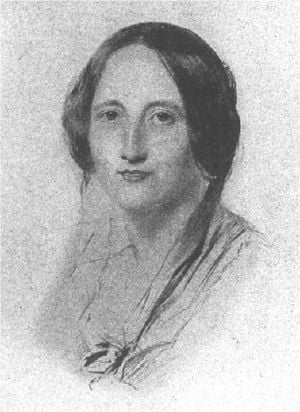 The Gaskells settled in Manchester, where the industrial surroundings would offer inspiration for her novels (in the industrial genre). They had several children: a stillborn daughter in 1833, followed by Marianne (1834), Margaret Emily (1837), known as Meta, Florence Elizabeth (1842), William (1844-1845) and Julia Bradford (1846). Her daughter Florence married a barrister, Charles Crompton, in 1862.

They rented a villa in Plymouth Grove in 1850, after the publication of Gaskell's first novel, and Gaskell lived in the house with her family until her death 15 years later.[4] All of Gaskell's books, except for one, were written at Plymouth Grove, while her husband held welfare committees and tutored the poor in his study. The circles in which the Gaskells moved included literary greats, religious dissenters and social reformers, including William and Mary Howitt. Visitors to Plymouth Grove included Charles Dickens, John Ruskin, Harriet Beecher Stowe and American writer Charles Eliot Norton, while conductor Charles Hallé lived close by, and taught the piano to one of Gaskell's four daughters. Close friend Charlotte Brontë is known to have stayed there three times, and on one occasion hid behind the drawing room curtains as she was too shy to meet Gaskell's visitors.[5]

Gaskell died in Holybourne, Hampshire in 1865 aged 55. The house on Plymouth Grove remained in the Gaskell family until 1913.

Gaskell's first novel, Mary Barton, was published anonymously in 1848. The best known of her remaining novels are Cranford (1853), North and South (1854), and Wives and Daughters (1865). She became popular for her writing, especially her ghost story writing, aided by her friend Charles Dickens, who published her work in his magazine Household Words. Her ghost stories are quite distinct in style from her industrial fiction and belong to the Gothic fiction genre.

Even though her writing conforms to Victorian conventions (including signing her name "Mrs. Gaskell"), Gaskell usually frames her stories as critiques of contemporary attitudes, particularly those toward women, with complex narratives and dynamic female characters.[6]

In addition to her fiction, Gaskell also wrote the first biography of Charlotte Brontë, which played a significant role in developing her fellow writer's reputation.

Unitarianism urged comprehension and tolerance upon its members and upon all fellow Christians and, even though Gaskell tried to keep her own beliefs hidden, these were values Gaskell felt very strongly about and tried to include in her works, like in North and South where "Margaret the Churchwoman, her father the Dissenter, Higgins the Infidel, knelt down together. It did them no harm."[7][8]

The first half of the novel focuses mainly on the comparison between the rich and poor. In a series of set pieces across the opening chapters we are shown the humble lifestyle of the Barton's and Wilson's (most prominently in the chapter "A Manchester Tea-Party"), the devastating conditions of the Davenport household and the contrasting luxury of the Carson establishment (in the chapter "Poverty and Death"). A key symbol is five shillings; this is the amount John Barton receives for pawning most of his possessions, but also the loose change in Henry Carson's pocket.

Gaskell depicts the importance of the mother in a family through the visible decline in John Barton's physical and moral well-being after his wife's death and by Job Leigh's inability to care for Margaret as a baby in the chapter "Barton's London Experience."

The second half of the book deals mainly with the murder plot. Redemption is also a key aspect of the novel; as seen through the eventual outcome of the relationship between Messers Carson and Barton, but also in Gaskell's presentation of Esther, a "fallen woman." Her selfless nature and brutal honesty in confessing her own faults portrays her as a prostitute with a "heart of gold"—one of the early such depictions in nineteenth-century literature.

Despite several protests to the contrary, Gaskell's aim is squarely on the class divide of nineteenth-century Great Britain. She openly pleads for reducing this divide through increased communication and, as a consequence, understanding between employers and workmen and generally through a more human behavior based on Christian principles, at the same time presenting her own fears of how the poor will eventually act in retaliation to their oppression.

Gaskell's style is notable for putting local dialect words into the voice of middle-class characters and of the narrator; for example in North and South, Margaret Hale suggests redding up (tidying) the Bouchers' house and even offers jokingly to teach her mother words such as knobstick (strike-breaker).[9] Her husband collected Lancashire dialect, and Gaskell defended her use of dialect as expressing otherwise inexpressible concepts in an 1854 letter to Walter Savage Landor:[9]

:'...you will remember the country people's use of the word "unked." I can't find any other word to express the exact feeling of strange unusual desolate discomfort, and I sometimes "potter" and "mither" people by using it.'[10]

She used the dialect word "nesh" (soft), which goes back to Old English, in Mary Barton:

"Sit you down here: the grass is well nigh dry by this time; and you're neither of you nesh folk about taking cold."[11]

"Now, I'm not above being nesh for other folks myself. I can stand a good blow, and never change colour; but, set me in the operating-room in the Infirmary, and I turn as sick as a girl." "At Mrs Wilson's death, Norah came back to them, as nurse to the newly-born little Edwin; into which post she was not installed without a pretty strong oration on the part of the proud and happy father; who declared that if he found out that Norah ever tried to screen the boy by a falsehood, or to make him nesh either in body or mind, she should go that very day."[12]

Gaskell is still best known for her biography of her friend, and fellow novelist, Charlotte Bronte.

Retrieved from https://www.newworldencyclopedia.org/p/index.php?title=Elizabeth_Gaskell&oldid=1062216
Categories:
Hidden category:
This page was last edited on 30 December 2021, at 14:44.
Content is available under Creative Commons Attribution/Share-Alike License; additional terms may apply. See Terms of Use for details.