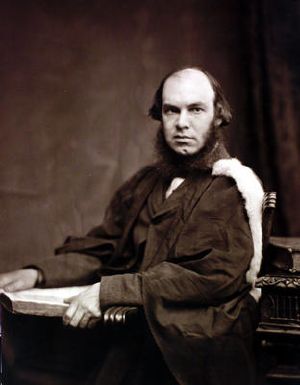 Edward Caird while a professor at the University of Glasgow.

Edward Caird (March 23, 1835 – November 1, 1908) was a British philosopher and leader of the Neo-Hegelian school in Britain. He was one of the first generation of "British idealists," whose philosophical work was largely in reaction to the empiricist views of Alexander Bain (1818-1903) and John Stuart Mill. Caird applied evolutionary theory to the development of thought and culture, arguing that the philosophical views of the past could no longer satisfy the needs of the present. He reinterpreted Kant’s distinction between appearance and reality as simply a stage in the growth of knowledge, and pointed out that this distinction took place only within human consciousness.

Caird published two sets of Gifford lectures, The Evolution of Religion (2 volumes, 1893) and The Evolution of Theology in the Greek Philosophers (1904), in which he explored the evolution of religion through three stages of “objective,” “subjective,” and “absolute” religion. He presented subject and object as interrelated, inseparable manifestations of an underlying unity, God, and argued that as human understanding of both science and spiritual life developed, knowledge of God would be increased.

Edward Caird was born at Greenock, Scotland, the fifth of seven boys. His eldest brother, John Caird (1820-1898), a well-known preacher and theologian and author of An Introduction to the Philosophy of Religion (1880), had a strong influence on Edward. Edward began his education at Greenock Academy, and went on to the University of Glasgow, which he briefly abandoned due to ill health. He went on to Balliol College, Oxford, and graduated in 1863, gaining first-class honors in Classical Moderations and in "Greats." He became Fellow and Tutor of Merton College, Oxford from 1864 to 1866, but soon left for the Professorship of Moral Philosophy at Glasgow (1866-1893). There, in addition to carrying out his academic duties, Caird was active in university and local politics, and helped to establish the study of political sciences at the University. Following the death of Benjamin Jowett (1817-1893), Caird returned to Oxford, where he served as Master of Balliol College until 1907. He was a founding fellow of the British Academy (1902), a corresponding member of the French Academy, and held honorary doctorates from the Universities of St Andrews (1883), Oxford (1891), Cambridge (1898), and Wales (1902). In 1907, ill health and paralysis forced him to retire from Oxford, and he died the following year on November 1, 1908.

Edward Caird was one of the first generation of “British idealists” whose work was largely in reaction to the empiricism of Alexander Bain (1818-1903) and John Stuart Mill. Caird published his first major work in 1877, A Critical Account of the Philosophy of Kant (1877), examining the Critique of Pure Reason and the Prolegomena to any Future Metaphysics. In 1889, it was published as a revised edition in two volumes, The Critical Philosophy of Immanuel Kant. Caird wished to show the relation of the three Critiques and the continuity in the movement of Kant's thought. Caird believed that, though Kant had inaugurated a new era in philosophy with his attempt to integrate the a priori and the a posteriori, he had failed to complete this task fully. Caird’s own idealism was an effort to further develop these ideas. In 1833, Caird published a small monograph, Hegel, still considered one of the best introductions to Hegel's philosophy. In 1885, his Social Philosophy and Religion of Comte appeared. Like many of the British idealists, Caird had a strong interest in classical literature, and in 1892, he published two volumes of Essays on Literature and Philosophy (1892), a collection of critical essays on Goethe, Rousseau, Carlyle, Dante, and Wordsworth, with a discussion (in Volume II) of Cartesianism (Descartes, Malebranche, and Spinoza) and metaphysics.

He also published two sets of Gifford lectures as The Evolution of Religion (2 volumes, 1893) and The Evolution of Theology in the Greek Philosophers (2 volumes, 1904). Like many other idealists, such as D.G. Ritchie (1853-1903), Caird wanted to explore the relation of evolutionary theory to the development of thought and culture. The Evolution of Religion (2 volumes, 1893), discussed the possibility of a science of religion, the nature of religion beginning with ancient Greece, and especially the development of the Christian faith through to the Reformation. Caird portrayed the spiritual sense of humanity as having been dominated by the object at first, and then gradually, constrained by its own abstractions, evolving so that it fell under the dominance of the subject.

The second set of Gifford lectures, The Evolution of Theology in the Greek Philosophers, provided an evolutionary account of religious conceptions toward a "reflective religion," or theology. The story of Greek philosophy, considered mainly in its relation to theology, was carried from Plato through Aristotle, the Stoics, and Philo, to Plotinus and, in the final lecture, to Christian theology and St. Augustine.

Caird exercised a strong influence on later idealists such as John Watson and Bernard Bosanquet, particularly with his ideas concerning the development of an "evolutionary" account of religion.

Caird wrote about Kant and Hegel, and he used metaphysical idealism to interpret human experience, but he was not a disciple of Hegel. Caird believed in intellectual evolution, and did not think that a German philosophy from a previous generation could satisfy a modern generation of British intellectuals. He also believed that many divisions in philosophical thinking, such as that between science and religion, and between the empiricists and Cartesians had grown so deep that they were apparently irreconcilable. Caird argued that once such cultural divisions have arisen, it is impossible to return to the simpler thinking of earlier times, and that instead, these differences must be reconciled at a higher level. Caird believed that Kant had made such an effort at synthesis, but that he had created a misunderstanding by representing the distinction between appearance and reality as a distinction between phenomena and the unknowable “things-in-themselves” which caused the phenomena. Caird maintained that the distinction between appearance and reality should be regarded instead as a stage in the growth of knowledge. The concept of an “unknowable thing-in-itself” had to be removed from philosophy. Once this was done, it would become clear that the real insight of critical philosophy was that objectivity exists only for a self-conscious subject. Kant had demonstrated that the fundamental relationship is between a subject and an object, which together form a “unity in difference.” There is an original synthesis; the distinction between subject and object only emerges inside the fundamental unity of human consciousness. Caird argued that scientific study was itself an example of this "unity in difference;" scientists studied individual objects while at the same time endeavoring to discover universal laws and correlate them in a coherent system.

In this context, Caird himself examined the religious consciousness, going beyond subject and object to an underlying unity. Subject and object were distinct, yet at the same time related to each other in such a way that one could not be conceived without the other. “We are forced to seek the secret of their being in a higher principle, of whose unity they in their actions and reaction are the manifestations, which they presuppose as their beginning and to which they point as their end” (The Evolution of Religion I, p. 67). Caird described this underlying unity in Platonic terms, as being “at once the source of being to all things that are, and of knowing to all beings that know" (The Evolution of Religion I, p. 68), the presupposition of consciousness. This is what some call God. Not all humans possess an explicit awareness of God; such an awareness requires a long process of development, which can be observed in the history of religion.

Caird identified three stages in the development of religion. In the first stage, “objective religion,” humans have a dim awareness of a unity encompassing themselves and other things, but can only form ideas of things which he perceives as actual existences in space and time. In the second stage, “subjective religion,” one turns from absorption in Nature to consciousness of himself, and conceives of God as a being apart from both Nature and humanity, revealing Himself mostly through the voice of conscience. In the third stage, “absolute religion,” the self-conscious subject and Nature are seen as distinct and yet essentially related, grounded in an ultimate unity. God is conceived as “the Being who is at once the source, the sustaining power, and the end of our spiritual lives” (The Evolution of Religion I, p. 195). To Caird, God manifests Himself in both subject and object, and the more one understands both his spiritual aspect and the world of Nature and science, the more he can know about God.

Retrieved from https://www.newworldencyclopedia.org/p/index.php?title=Edward_Caird&oldid=1006894
Categories:
Hidden category:
This page was last edited on 23 September 2017, at 15:39.
Content is available under Creative Commons Attribution/Share-Alike License; additional terms may apply. See Terms of Use for details.