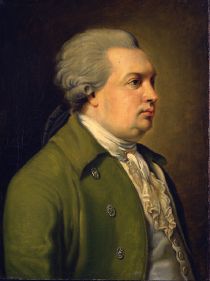 Denis Ivanovich Fonvizin (Russian: Денис Иванович Фонвизин) (April 14, 1744? – December 1, 1792) is the only playwright of the Russian Enlightenment whose plays are still staged today. His main works are two satirical comedies which mock contemporary Russian gentry. The Enlightenment in Russia came in response to that of Western Europe and was led by those who wanted to introduce more Western social, political and cultural ideas into Russian life. The consequence would be split between "Westernizers" and "Slavophiles," who embraced their Slavic roots and traditions in the face of greater Western influence.

Born in 1745, in Moscow, of a family of gentry, he received a good education at the University of Moscow and very early began writing and translating. He entered the civil service, becoming secretary to Count Nikita Panin, one of the great noblemen of Catherine the Great's reign. Because of Panin's protection, Fonvizin was able to write critical plays without fear of being arrested, and, in the late 1760s, he brought out the first of his two famous comedies, The Brigadier-General.

A man of means, he was always a dilettante rather than a professional author, though he became prominent in literary and intellectual circles. In 1777-78 he traveled abroad, the principal aim of his journey being the medical faculty of Montpellier. He described his voyage in his Letters from France, one of the most elegant specimens of the prose of the period, and the most striking document of that anti-French nationalism which in the Russian elite of the time of Catherine went hand in hand with a complete dependence on French literary taste.

In 1782 appeared Fonvizin's second and best comedy The Minor, which definitely classed him as the foremost of Russian playwrights. His last years were passed in constant suffering and traveling abroad for his health. He died in Saint Petersburg in 1792.

Fonvizin was an early favorite of Catherine the Great because of his linguistic abilities. Originally a government translator, he used his knowledge of French and German to translate fables, later creating his own.

However, Fonvizin's reputation rests almost entirely on his two comedies, which are beyond doubt the most popular Russian plays before Alexander Griboyedov's Woe from Wit. They are both in prose and adhere to the canons of classical comedy. Fonvizin's principal model, however, was not Moliere, but the great Danish playwright Holberg, whom he read in German, and some of whose plays he had translated.

Both comedies are plays of social satire with definite axes to grind. The Brigadier-General is a satire against the fashionable French semi-education of the petits-maîtres. It is full of excellent fun, and though less serious than The Minor, it is better constructed. It is a commentary on the wholesale acceptance of everything French in Russian culture, a pattern that would characterize the aristocracy from Fonvizin's time until the Revolution. The eponymous character attempts to seduce his friend's wife, while his son is supposed to be engaged to her daughter. Instead he seduces the stepmother and all are brought to shame.

The Minor, though imperfect in dramatic construction, is a more remarkable work and justly considered the superior of the two works, and one of the first dramas written in Russia. The point of the satire in The Minor is directed against the brutish and selfish crudeness and barbarity of the uneducated country gentry. The central character, Mitrofanushka, is the accomplished type of vulgar and brutal selfishness, unredeemed by a single human feature–even his fondly doting mother (Mrs. Protakov, from the Russian word Простой or "simple") gets nothing from him for her pains. She tries to marry him off to the neighbor, the orphan Sofya, in an elaborate plan to gain control over her estate, but in the end they are undone by a deus ex machina, a traveling government inspector who ascertains her plan and thwarts her efforts. The dialogue of these vicious characters (in contrast to the stilted language of the lovers and their virtuous uncles) is true to life and finely individualized; and they are all masterpieces of characterization–a worthy introduction to the great portrait gallery of Russian fiction.

As a measure of its popularity, several expressions from The Minor have been turned into proverbs, and many authors (among whom Alexander Pushkin) regularly cite from this play, or refer to it by mentioning the character's names.123

Fonvizin's criticism of the aristocracy led to his falling out of favor with the Empress. He spent his later life traveling.

Fonvizin played an important role in the Russian Enlightenment. The Russian Age of Enlightenment was a period in the seventeenth century in which the government began to actively encourage the proliferation of arts and sciences. This time gave birth to the first Russian university, library, theater, public museum, and relatively independent press. Like other enlightened despots, Catherine the Great played a key role in fostering the arts, sciences, and education. The national Enlightenment differed from its Western European counterpart in that it promoted further Europeanization of all aspects of Russian life and was concerned with attacking the institution of serfdom in Russia. The Pugachev Rebellion and French Revolution may have shattered the illusions of rapid political change, but the intellectual climate in Russia was altered irrevocably. Russia's place in the world was the topic of not only the plays of Fonvizin, but the ideas of Mikhail Shcherbatov, Andrey Bolotov, Ivan Boltin, and Alexander Radishchev as well; these discussions precipitated the divorce between the radical, Westernizing and conservative, Slavophile traditions of Russian thought. Fonvizin's treatment of corruption in the provinces and the archaic institution of serfdom would become the staple of much of the nineteenth-century's literary masterpieces. In particular, there are elements of Fonvizin in Nikolai Gogol's comic play "The Inspector General," as well as in his great short story "The Overcoat," and his novel Dead Souls.

Retrieved from https://www.newworldencyclopedia.org/p/index.php?title=Denis_Fonvizin&oldid=1041266
Categories:
Hidden category:
This page was last edited on 25 August 2020, at 02:31.
Content is available under Creative Commons Attribution/Share-Alike License; additional terms may apply. See Terms of Use for details.