Demolition is the opposite of construction: The tearing-down of buildings and other structures. It contrasts with deconstruction, which is the taking down of a building while carefully preserving valuable elements for re-use. The tallest lawfully demolished building was the 47-story Singer Building of New York City, which was built in 1908 and torn down in 1967-1968 to be replaced by One Liberty Plaza.

For all buildings, such as houses, that are only two or three stories high, demolition is a rather simple process. The building is pulled down either manually or mechanically using large hydraulic equipment: Elevated work platforms, cranes, excavators, or bulldozers.

Larger buildings may require the use of a wrecking ball, a heavy weight on a cable that is swung by a crane into the side of the buildings. Wrecking balls are especially effective against masonry, but are less easily controlled and often less efficient than other methods. Newer methods may use rotational hydraulic shears and silenced rock-breakers attached to excavators to cut or break through wood, steel, and concrete. The use of shears is especially common when flame cutting would be dangerous.

Demolition of a chimney at the former brewery "Henninger" in Frankfurt am Main, Germany, on 2nd Dezember 2006

The demolition of the New Haven Coliseum in New Haven, Connecticut.

Large buildings, tall chimneys, smokestacks, and increasingly some smaller structures may be destroyed by building implosion using explosives. Imploding a building is very fast—the collapse itself only takes seconds—and an expert can ensure that the building falls into its own footprint, so as not to damage neighboring structures. This is essential for tall structures in dense urban areas.

Any error can be disastrous, however, and some demolitions have failed, severely damaging neighboring structures. The greatest danger is from flying debris which, when improperly prepared for, can kill onlookers.

Even more dangerous is the partial failure of an attempted implosion. When a building fails to collapse completely the structure may be unstable, tilting at a dangerous angle, and filled with un-detonated but still primed explosives, making it difficult for workers to approach safely.

A third danger comes from the shockwave that occurs during the implosion. If the sky is clear, the shockwave, a wave of energy and sound, travels upwards and disperses, but if cloud coverage is low, the shockwave can travel outwards, breaking windows or causing other damage to surrounding buildings.[1]

Stephanie Kegley of CST Environmental described shockwaves by saying, "The shockwave is like a water hose. If you put your hand in front of the water as it comes out, it fans to all sides. When cloud coverage is below 1,200 feet, it reacts like the hand in front of the hose. The wave from the shock fans out instead of up toward the sky."[2]

While controlled implosion is the method that the general public often thinks of when discussing demolition, it can be dangerous and is only used as a last resort when other methods are impractical or too costly. The destruction of large buildings has become increasingly common as the massive housing projects of the 1960s and 1970s are being leveled around the world. At 439 feet (134 m) and 2,200,000 square feet (200,000 m²), the J. L. Hudson Department Store and Addition is the tallest steel framed building and largest single structure ever imploded.[3] 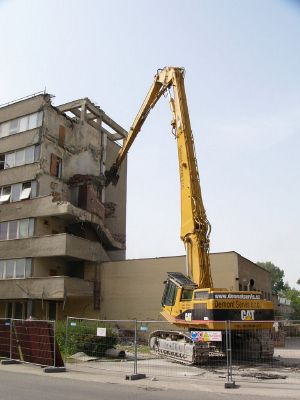 A high-reach excavator is used to demolish this tower block

It takes several weeks or months to prepare a building for implosion. All items of value, such as copper wiring, are stripped from a building. Some materials must be removed, such as glass that can form deadly projectiles, and insulation that can scatter over a wide area. Non-load bearing partitions and drywall are removed.[4] Selected columns on floors where explosives will be set are drilled and nitroglycerin and TNT are placed in the holes. Smaller columns and walls are wrapped in detonating cord. The goal is to use as little explosive as possible; only a few floors are rigged with explosives, so that it is safer (less explosives) and less costly. The areas with explosives are covered in thick geotextile fabric and fencing to absorb flying debris.[4] Far more time-consuming than the demolition itself is the clean-up of the site, as the debris is loaded into trucks and hauled away.

Before any demolition activities, there are many steps that need to take place—including but not limited to performing asbestos abatement, obtaining necessary permits, submitting necessary notifications, disconnecting utilities, rodent baiting, and development of site-specific safety and work plans.

The typical razing of a building is accomplished as follows:

Hydraulic excavators may be used to topple one- or two-story buildings by an undermining process. The strategy is to undermine the building while controlling the manner and direction in which it falls. The demolition project manager/supervisor will determine where undermining is necessary so that a building is pulled in the desired manner and direction. The walls are typically undermined at a building's base, but this is not always the case if the building design dictates otherwise. Safety and cleanup considerations are also taken into account in determining how the building is undermined and ultimately demolished. Hoe rams are typically used for removing the concrete road deck and piers during bridge demolition, while hydraulic shears are used to remove the bridge's structural steel.

In some cases a crane with a wrecking ball is used to demolish the structure down to a certain manageable height. At that point undermining takes place as described above. However crane mounted demolition balls are rarely used within demolition due to the uncontrollable nature of the swinging ball and the safety implications associated.

High reach demolition excavators are more often used for tall buildings where and explosive demolition is not appropriate or possible.

To control dust, fire hoses are used to maintain a wet demolition. Hoses may be held by workers, secured in fixed location, or attached to lifts to gain elevation.

Loaders or bulldozers may also be used to demolish a building. They are typically equipped with "rakes" (thick pieces of steel that could be an I-beam or tube) that are used to ram building walls. Skid loaders and loaders will also be used to take materials out and sort steel.

A new approach to demolition is the deconstruction of a building with the goal of minimizing the amount of materials going to landfills. This "green" approach is applied by removing the materials by type material and segregating them for reuse or recycling. With proper planning this approach has resulted in landfill diversion rates that exceed 90 percent of an entire building and its contents in some cases. With the rising costs of landfills this method is usually more economical than traditional demolition, and contributes to a healthier environment.

The development of plant and equipment has allowed for the easier segregation of waste types on site and the reuse within the construction of the replacement building. On site crushers allow the demolished concrete to be reused as type 1 crushed aggregate either as a piling mat for ground stabilization or as aggregate in the mixing of concrete.

Timber waste can be shredded using specialist timber shredders and composted, or used to form manufactured timber boards, such as MDF or Chipboard.

Safety should always be paramount. A site safety officer should be assigned to each project to enforce all safety rules and regulations.

Retrieved from https://www.newworldencyclopedia.org/p/index.php?title=Demolition&oldid=1041257
Categories:
Hidden category:
This page was last edited on 24 August 2020, at 23:13.
Content is available under Creative Commons Attribution/Share-Alike License; additional terms may apply. See Terms of Use for details.