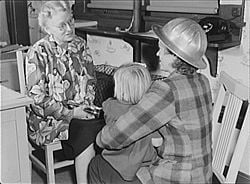 A woman worker drops off her child at day care.

The term day care or child care refers to the care of a child during the day, usually by a person outside the child's immediate family, and often so the parent(s) can work. "Day care" is the most common term in the United States, while "child care" is used in both the United Kingdom and Australia. Day care can range from a few children in the home of a childminder to more formally structured, school-like settings. Day care is to be differentiated from babysitting, which is the temporary, occasional care of a child, often just for an evening.

While the purpose of day care is to enable the parents to be free for other activities, usually work, the needs of the child are also significant. It is known from the work of John Bowlby that young children require consistency in their caregivers, so that they form strong attachment bonds. This has been used as an argument that the young children should not attend day care, but stay home with a parent or constant caregiver. On the other hand, it is also the case that even young children enjoy social interaction with peers, and the experiences of spending supervised time with peers is beneficial. The caveat, however, is that the supervision, the facility, and the caregivers, must all conform to high standards, at least comparable to that experienced at home. As such, day care can be seen as an extension of the family, and a preparation for further experience in the wider community. 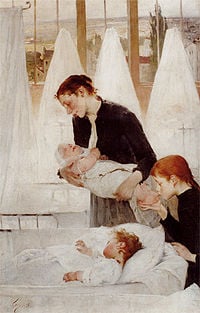 A creche (1899), oil on canvas by Henry-Jules-Jean Geoffroy

Day care, in the form of institutions called "crèches," appeared in France about 1840, mainly as a charitable means of caring for the infants of working class women. The Société des Crèches was recognized by the French government in 1869. The first day care center in Great Britain was started in 1860, and most European cities had established day care centers by the second half of the nineteenth century.[1] Originating in Europe in the late eighteenth and early nineteenth century, day cares were established in the United States by private charities in the 1850s, the first being the New York Day Nursery in 1854.

In a great number of cases, the care of a child is performed by a parent, or through informal arrangements with relatives, neighbors, or friends. Other families may choose to hire an in-home caregiver such as a nanny or au pair to care for the child(ren) while they are at work.

Often, families who do not have or wish to choose these options will opt for day care. Day care facilities can vary drastically, ranging from an individual person in their own home to franchised, corporate institutions. The care given can range from supervised play to structured lesson plans.

In most countries, there is a certain amount of legislation that controls the operation of day care centers, and often day cares must obtain licenses. This legislation defines what constitutes a day care (so as not to regulate individual babysitters), and may specify the physical facilities (washroom, eating, sleeping, lighting levels, and so forth). The minimum window space may be such that it precludes day cares from being in a basement. Minimum floor space per child may be specified, as well as the maximum number of children per room. A minimum of outdoor time may be mandated, as well as staffing ratios (for example 1:3 for under 18 months and higher ratios for older children). Legislation may mandate qualifications of supervisors. Staff typically do not require any qualifications but staff under the age of 18 may require supervision. Typically, once the child reaches the age of 12, they are no longer covered by day care legislation and programs for older children may not be regulated.

The majority of workers in day care centers are female. A 1996 census in Canada showed that over 95 percent of childcare workers were female. Most, according to local regulations, had a degree from an early childhood education program, whether it was a one to two year program or a four year degree.[2]

Those opposed to day care often argue that there is no possible way that anyone could give a child the love and care that a parent can. It is argued that the child's socio-emotional development is affected by the fact that the child is not constantly with his/her parent(s). Primary attachments are formed between child and parent during these early years, which can theoretically affect the child later in life. However, it seems to be the case that high-quality child care can benefit a child. Day care and preschool can offer a child numerous social encounters, where he/she can learn how to interact with peers, conduct dialogues, and resolve conflicts with peers constructively.[4]

A 2001 report showed that children in high-quality care scored higher on tests of language, memory, and other skills than did children of stay-at-home mothers or children in lower-quality day care, and infant day care was not shown to affect the mother-child bond. Approximately 17 percent of children in day care, however, were shown to be more aggressive than those not in day care. This might be due to the fact that children in day care are more used to advocating for themselves in a group setting than children that were cared for by a parent. "Aggressive" behavior included bragging, showing off, arguing, or talking too much, as well as the smaller number of children who displayed bullying behavior. Researchers also found that parents have a much more powerful effect on their children's behavior than day care does.[5]

High quality day care may help to ensure adequate early childhood education for children of less skilled parents, and enable children to develop socially in ways that would be impossible at home. From a parental perspective, high quality day care can complement good parenting.

Another major concern of day care is the potential for transmission of infectious disease. The number of children usually present in a day care, as well as their proximity and the fact that infants and toddlers tend to drool and put everything in their mouths, leads to a higher transmission of disease. Most day cares have rules that mandate sick children remaining at home, but parents often bring such children in anyway, especially if they do not have the ability to take off from work and there is no alternative for the child's care. Day cares usually attempt to sanitize toys and surfaces often, but it is impossible to clean all the germs, especially when they are airborne.

Although studies show day care to be beneficial to a child's development, it is important to note that this benefit only exists with high quality day care. There are several factors that help determine the quality of a day care provider. While most countries have laws and regulations governing the operation of day cares, quality of care can still vary from provider to provider. Day cares with a higher staff-to-child ratio (more staff per child) are able to devote more individual time to each child, as well as being more able to make sure the environment remains safe and clean for the children. Day cares with less staff turnover help to provide a more stable environment for children, where children can bond more effectively with staff.

A study in Australia concluded that day care centers run by corporate chains provided the lowest quality care when compared to community-based providers and independent private centers. Corporate day care, while providing superior buildings and play equipment, was found to be less likely to provide enough nutritious food, had a lower staff-to-child ratio, and was less able to develop individual relationships with each child. This may be due to the fact that corporate day care tends to treat day care as a business, where parents are a "purchaser" concerned with cost and affordability. Day cares that operate from a humanist perspective, on the other hand, see day care as individual, rather than the businesslike, standardized view of day care.[6]

Often, cost is a major factor in parents' decision where they are able to send their child for day care. Unfortunately, this sometimes means that a parent may not be able to afford the highest quality of day care they would like for their child. In some areas of the world, child care may not be available, and families may suffer if parents are unable to work. There are numerous organizations throughout the world that deal with child care. Some campaign for free or subsidized child care for all. Others want tax breaks or allowances that would allow parents to make a non-finance driven choice. Government subsidized programs, such as Head Start in the United States, are often provided. Most government subsidized programs are predominantly concerned with child development, and often hire certified teachers.