David Thompson (April 30, 1770 – February 10, 1857), was an English-Canadian fur trader, surveyor, and map-maker, known to some native peoples as "Koo-Koo-Sint," or "the Stargazer." Over his career, he mapped over 3.9 million square kilometers of North America and for this has been described as the "greatest land geographer who ever lived."[1] This represented one-fifth of the North American continent. His great map became a summary of his lifetime of exploring and surveying the interior of North America. His greatest achievement, it was so accurate that 100 years later it was still the basis for many of the maps issued by the Canadian government. It now resides in the Archives of Ontario. The map covered the wide area stretching from Lake Superior to the Pacific Ocean, and was given by Thompson to the North West Company. His exploration and map aided in the settlement of portions of this vast region.

Thompson was born in London to recent Welsh migrants, David and Ann Thompson. When Thompson was two years old, his father died and the financial hardship of this occurrence resulted in his and his brother's placement in the Grey Coat Hospital, a school for the disadvantaged of Westminster. He eventually graduated to the Grey Coat mathematical school and was introduced to the basic navigation skills which would form the basis of his future career. In 1784, at the age of fourteen, he entered a seven-year apprenticeship with the Hudson's Bay Company. He set sail on May 28 of that year, and left England forever.[2]

He arrived in Churchill (now in Manitoba) and was put to work copying the personal papers of the governor of Fort Churchill, Samuel Hearne. The next year, he was transferred to nearby York Factory, and over the next few years spent time as a clerk at Cumberland House and South Branch House, before arriving at Manchester House in 1787. On December 23, 1788, Thompson seriously fractured his leg, forcing him to spend the next two winters at Cumberland House convalescing. It was during this time he greatly refined and expanded his mathematical, astronomical, and surveying skills under the tutelage of Hudson's Bay Company surveyor, Philip Turnor.

In 1790, with his apprenticeship nearing its end, Thompson made the unusual request of a set of surveying tools in place of the typical parting gift of fine clothes offered by the company to those completing their indenture. He entered the employ of the Hudson's Bay Company as a fur trader and, in 1792, completed his first significant survey, mapping a route to Lake Athabaska (presently straddling the Alberta/Saskatchewan border). In recognition of his map-making skills, the company promoted him to surveyor, in 1794. Thompson continued working for the Hudson's Bay Company until May 23, 1797, when he left and entered the employ of the competition, the North West Company, where he continued to work as a fur trader and surveyor.

Thompson's decision to defect to the North West Company, in 1797, without providing the customary one-year notice was not well received by his former employers. However, joining the North West Company allowed Thompson to pursue his interest in surveying and work on mapping the interior of what was to become Canada. In 1798, the company sent him to Red Deer Lake (in present-day Alberta) to establish a trading post. Thompson spent the next few seasons trading based in Fort George (now in Alberta), and during this time, led several expeditions into the Rocky Mountains. In 1797, Thompson was sent south by his employers to survey of much of the Canada-U.S. boundary along the 49th parallel in the west, and from the St. Lawrence River to Lake of the Woods to satisfy unresolved questions of territory arising from the Jay Treaty between Great Britain and the United States. By 1798, Thompson had completed a survey of 6750 km (4,200 mi) from Grand Portage, through Lake Winnipeg, to the headwaters of the Assiniboine and Missouri Rivers, as well as two sides of Lake Superior.

In 1804, at the annual meeting of the North West Company in Kaministiquia, Thompson was made a full partner of the company and spent the next few seasons based here managing the fur trading operations but still finding time to expand his surveys of the waterways around Lake Superior. However, a decision was made at the 1806 company meeting to send Thompson back out into the interior. Concern over the American-backed expedition of Lewis and Clark prompted the North West Company to charge Thompson with the task of finding a route to the Pacific in order to open up the lucrative trading territories of the Pacific Northwest.

After the general meeting in 1806, Thompson traveled to Rocky Mountain House and prepared for an expedition to follow the Columbia River to the Pacific. In June 1807, Thompson crossed the Rocky Mountains and spend the summer surveying the Columbia basin. He helped establish Kootenae House and later Saleesh House, thereby successfully extending North West Company fur trading territories. Over the next few seasons, Thompson continued to survey the area. Thompson mapped and established trading posts in Northwestern Montana, Idaho, Washington, and Western Canada; including Saleesh House, the first trading post west of the Rockies in Montana. The maps he made of the Columbia River basin east of the Cascade Mountains were of such high quality and detail that they continued to be regarded as authoritative well into the mid-twentieth century. In fact, Thompson’s drawings of the upper portion of the Missouri River were incorporated into a map for the Lewis and Clark expedition that followed seven years later. In early 1810, Thompson was returning eastward, towards Montreal, but while on route at Rainy Lake, received orders to return to the Rocky Mountains and establish a route to the mouth of the Columbia. This was a response by the North West Company to the plans of John Jacob Astor to send a ship around the Americas to establish a fur trading post. During his return, Thompson was delayed by an angry group of Peigan natives, which ultimately forced him to seek a new route across the Rocky Mountains through the Athabasca Pass. On July 11, 1811, Thompson made it to the newly built Fort Astoria, arriving two months after the Pacific Fur Company's ship. Thompson wintered at Saleesh House before beginning his final journey back to Montreal in 1812.

In his published journals, Thompson recorded seeing large footprints near what is now Jasper, Alberta, in 1811. It has been suggested that these prints were similar to what has since been called the "sasquatch." However, Thompson noted that these tracks showed "a small Nail at the end of each [toe]," and stated that these tracks "very much resembles a large Bear's Track."[3]

He married Charlotte Small on June 10 1799, at Île-à-la-Crosse, a mixed-blood child of a Scottish fur trader and a Cree mother. Their marriage was formalized at the Scotch Presbyterian Church in Montreal on October 30, 1812. He and Charlotte had thirteen children together; five of them were born before he left the fur trade. The family did not adjust easily to life in Eastern Canada and two of the children, John (aged 5) and Emma (aged 7) died of round worms, a common parasite. Their marriage lasted 58 years, the longest Canadian pre-Confederation marriage known. 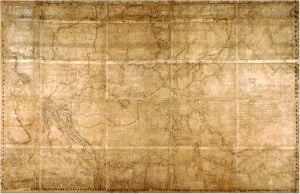 Map of the North-West Territory of the Province of Canada, stretching from the Fraser River on the west to Lake Superior on the east. By David Thompson, 1814.

Upon his arrival back in Montreal, Thompson retired with a generous pension from the North West Company. He settled in nearby Terrebonne and worked on completing his great map, a summary of his lifetime of exploring and surveying the interior of North America. The map covered the wide area stretching from Lake Superior to the Pacific, and was given by Thompson to the North West Company. Thompson's 1814 map, his greatest achievement, was so accurate that 100 years later it was still the basis for many of the maps issued by the Canadian government. It now resides in the Archives of Ontario.[4]

In 1815, Thompson moved his family to Williamstown, Upper Canada, and a few year later was employed to survey the newly established borders with the United States from Lake of the Woods to the Eastern Townships of Quebec, established by Treaty of Ghent after the War of 1812. In 1843, Thompson completed his atlas of the region from Hudson Bay to the Pacific Ocean.

Afterwards, Thompson returned to a life as a land owner, but soon financial misfortune would ruin him. By 1831, he was so deeply in debt he was forced to take up a position as a surveyor for the British American Land Company to provide for his family. His luck continued to worsen and he was forced to move in with this daughter and son-in-law in 1845. He began work on a manuscript chronicling his life exploring the continent, but this project was left unfinished when his sight failed him in 1851.

The land mass mapped by Thompson amounted to 3.9 million square kilometers of wilderness (one-fifth of the continent). His contemporary, the great explorer Alexander Mackenzie, remarked that Thompson did more in ten months than he would have thought possible in two years.

Despite these significant achievements, Thompson died in Montreal, in near obscurity on February 10, 1857, his accomplishments almost unrecognized. He never finished the book of his 28 years in the fur trade, based on his 77 field notebooks, before he died. In the 1890s, geologist J.B. Tyrrell resurrected Thompson's notes and in 1916, published them as David Thompson's Narrative.[5]

Thompson's body was interred in Montreal's Mount Royal Cemetery in an unmarked grave. It was not until 1926 that efforts by J.B. Tyrell and the Canadian Historical Society resulted in the placing of a tombstone to mark his grave.

In 1957, one hundred years after his death, the Canadian government honored him with his image on a Canadian postage stamp. The David Thompson Highway in Alberta was named in his honor. His prowess as a geographer is now well-recognized. He has been called "the greatest land geographer who ever lived."

There is a monument dedicated to David Thompson (maintained by the state of North Dakota) approximately two miles north and one mile west of Karlsruhe, North Dakota.

The year 2007 marks the 150th year of Thompson's death and the 200th anniversary of his first crossing of the Rocky Mountains. Commemorative events and exhibits are planned across Canada and the United States from 2007 to 2011 as a celebration of his accomplishments.[6]

Retrieved from https://www.newworldencyclopedia.org/p/index.php?title=David_Thompson&oldid=1095785
Categories:
Hidden category:
This page was last edited on 15 January 2023, at 08:31.
Content is available under Creative Commons Attribution/Share-Alike License; additional terms may apply. See Terms of Use for details.