Cyclone Akash (JTWC designation: 01B, also known as Cyclonic Storm Akash) marked the first named tropical cyclone of the 2007 North Indian Ocean cyclone season. Tracked by both India Meteorological Department (IMD) and Joint Typhoon Warning Center (JTWC), it formed from an area of disturbed weather on the Bay of Bengal on May 12, and gradually organized as it drifted northward. An eye began to develop as it approached land, and after reaching peak 3-min sustained winds of 85 km/h (50 mph), it struck about 115 km (70 mi) south of Chittagong in Bangladesh. Akash rapidly weakened over land, with advisories discontinuing on May 15. 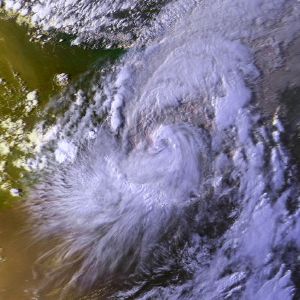 During the second week of May, low pressures persisted across the Bay of Bengal. An area of convection developed on May 11, and the next day the India Meteorological Department (IMD) classified it as a depression.[1] The system drifted northward,[2] and initially moderate wind shear kept the deep convection on the periphery of the consolidating low-level circulation center.[3] Gradually, banding features developed along the eastern semicircle, and with decreasing amounts of wind shear the system organized further.[4] By May 13, the pressure had dropped to 1000 mbar as wind shear levels dropped significantly.

An anticyclone developed over the system, while a mid-latitude trough over northeastern India provided favorable outflow. Convection continued to consolidate around the low-level circulation,[5] and with well-defined banding features and a central dense overcast over the center of circulation, the Joint Typhoon Warning Center (JTWC) upgraded it to Tropical Cyclone 01B at 1121 UTC on May 13 while located about 545 km (340 mi) west-northwest of Yangon, Burma.[6]

Upon first being upgraded, the storm tracked steadily northward due to a break in a mid-level ridge.[6] Early on May 14, IMD upgraded the system to deep depression status,[7] and six hours later classified it as Cyclonic Storm Akash after attaining 3-min sustained winds of 40 mph (65 km/h).[8] Akash continued to organize, with deep convection wrapping fully around the low-level circulation.[9] An eye began to form as the storm approached land, and at 1800 UTC on May 14 JTWC estimated 1-min sustained winds of 120 km/h (75 mph). Officially, Akash attained peak 3-min sustained winds of 85 km/h (50 mph) and a minimum central pressure of 988 hPa.

Additionally, meteorologists in Burma estimated Akash peaked with winds of 160 km/h (100 mph). As it interacted with the mid-latitude westerlies, it began to become extratropical.[10] Shortly after reaching peak winds, Akash made landfall about 115 km (70 mi) south of Chittagong. The storm weakened rapidly as it continued inland,[11] and early on May 15 IMD issued its final advisory on the system;[12] shortly thereafter, JTWC discontinued advisories.[11] India contributed the name, Akash, meaning "sky" in Hindi language.

In its daily tropical weather outlook, the India Meteorological Department warned fishermen on the Andaman and Nicobar Islands to forgo putting out to sea due to the anticipated rough seas.[2] Upon approaching the coast of Bangladesh, officials canceled all flights to and from the Shah Amanat International Airport. Additionally, authorities at the port of Chittagong worked to protect cargo ships from the storm, ultimately closing it for a period of nineteen hours.[13] In preparation for Akash, officials advised coastal residents to evacuate further inland; about 80,000 total residents left for emergency shelters.[13] About 40,000 Red Cross volunteers prepared to aid those potentially affected.[14]

The India Meteorological Department estimated winds of 45—55 km/h (28—34 mph) affected the Andaman and Nicobar Islands, though no one reported land fall.[2] In Sittwe in Burma, the storm produced a storm tide of 3 m (10 ft), which flooded coastal areas.

In Chittagong, about 115 km (70 mi) north of where Akash moved ashore, surface stations reported peak winds of 37 km/h (23 mph) and a pressure of 996.8vhPa.[11] Near its landfall location, Akash produced high tides that flooded coastal areas with up to 1.5 m (5 ft) of water,[13] destroying at least 30 businesses. The cyclone destroyed 205 houses and left an additional 845 damaged. Akash caused moderate crop damage near the coast,[15] including 2 ha (4.9 acres) of destroyed lands of shrimp farms. Meteorologists reported heavy precipitation with one station reporting a total of 53 mm (2.12 in); the rainfall caused flooding in inland areas.[13]

The heavy rains, caused by outer bands of the cyclone before it made landfall, limited play in Chittagong in the third One Day International cricket match between India and Bangladesh, before officials called off the match. Strong winds caused power outages throughout Cox's Bazar District,[13] and downed about 200 trees on St. Martin's Island. The cyclone left a total of 10 boats unaccounted for, with about 50 fishermen missing. In total, three fisherman had been confirmed killed, all on St. Martin's Island, [16] with two people left hospitalized.[17] The passage of Cyclone Akash left many people homeless. Initially the government made no response.[17]

The India Meteorological Department (IMD), also referred to as the Met Office, constitutes a Government of India organization responsible for meteorological observations, weather forecasts, and detecting earthquakes. The IMD, located in India's capital, New Delhi, also functions as the Regional Specialised Meteorological Centre responsible for forecasting tropical cyclones in the Arabian Sea and the Bay of Bengal.

History. After a tropical cyclone hit Calcutta in 1864, and the subsequent famines in 1866 and 1871, due to the failure of the monsoons, the government decided to set up a meteorological organization under one roof. H.F. Blanford received the appointment as the first meteorological reporter to the government of India. In May 1889, Sir John Eliot became the first Director General of Observatories in the erstwhile capital Calcutta. The headquarters shifted to Shimla, Pune and then to New Delhi.

Tasks. The meteorological department undertakes observations, communications, forecasting and weather services. IMD became the first organization in India to have a message switching computer for supporting its global data exchange. In collaboration with the Indian Space Research Organisation, the IMD uses the Indian National Satellite System (INSAT) for weather monitoring of the Indian subcontinent, being the first weather bureau of a developing country to develop and maintain its own geostationary satellite system.

The IMD numbers among six Regional Specialized Meteorological Centers within the World Weather Watch program of the World Meteorological Organization, responsible for forecasting tropical cyclone activity in the Indian Ocean north of the equator, including the Arabian Sea and the Bay of Bengal.[18]

Retrieved from https://www.newworldencyclopedia.org/p/index.php?title=Cyclone_Akash&oldid=1071103
Categories:
Hidden category:
This page was last edited on 23 June 2022, at 21:58.
Content is available under Creative Commons Attribution/Share-Alike License; additional terms may apply. See Terms of Use for details.