Cyberspace is a global domain within the information environment consisting of the interdependent network of information technology infrastructures (ITI) including the Internet, telecommunication networks, computer systems, and embedded processors and controllers. The term originates in science fiction, where it also includes various kinds of virtual reality (which is the experience of "being" in the alternate reality, or the simulated "being" in such a reality").

Cyberspace raises unique issues, especially regarding intellectual property and copyright infringement, and may call for new models of commerce. Furthermore, cyberspace has also become a unique area for developing human relationships and communities. While some argue that this universal ground for communication helps bring the world together, others point out that people will continue to associate narrowly with those of similar interests and economic and social status. Nevertheless, largely through the Internet, cyberspace has become a common ground for the rapid communication of ideas and values.

Origins of the term 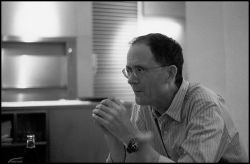 William Gibson in Bloomsbury, London, in September of 2007. His fiction is hailed by critics for its characterization of late capitalism, postindustrial society and the portents of the information age.

The word "cyberspace" (from cybernetics and space) was coined by science fiction author William Gibson in his 1982 story, "Burning Chrome," and popularized by his 1984 novel Neuromancer. The portion of Neuromancer cited in this respect is usually the following:

Cyberspace. A consensual hallucination experienced daily by billions of legitimate operators, in every nation, by children being taught mathematical concepts… A graphic representation of data abstracted from banks of every computer in the human system. Unthinkable complexity. Lines of light ranged in the nonspace of the mind, clusters and constellations of data. Like city lights, receding (69).

Gibson later commented on the origin of the term in the 2000 documentary No Maps for These Territories:

Did you know?
The term "cyberspace" was coined by science fiction writer William Gibson

All I knew about the word "cyberspace" when I coined it, was that it seemed like an effective buzzword. It seemed evocative and essentially meaningless. It was suggestive of something, but had no real semantic meaning, even for me, as I saw it emerge on the page.

The term Cyberspace started to become a de facto synonym for the Internet, and later the World Wide Web, during the 1990s. Author Bruce Sterling, who popularized this meaning,[1] credits John Perry Barlow as the first to use it to refer to "the present-day nexus of computer and telecommunications networks."

Cyberspace as an internet metaphor

While cyberspace should not be confused with the real internet, the term is often used to refer to objects and identities that exist largely within the communication network itself, so that a web site, for example, might be metaphorically said to "exist in cyberspace." According to this interpretation, events taking place on the Internet are not, therefore, happening in the countries where the participants or the servers are physically located, but "in cyberspace."

The "space" in cyberspace has more in common with the abstract, mathematical meanings of the term than physical space. It does not have the duality of positive and negative volume (while in physical space for example a room has the negative volume of usable space delineated by positive volume of walls, Internet users cannot enter the screen and explore the unknown part of the Net as an extension of the space they are in), but spatial meaning can be attributed to the relationship between different pages (of books as well as webservers), considering the unturned pages to be somewhere "out there." The concept of cyberspace therefore refers not to the content being presented to the surfer, but rather to the possibility of surfing among different sites, with feedback loops between the user and the rest of the system creating the potential to always encounter something unknown or unexpected.

Videogames differ from text-based communication in that on-screen images are meant to be figures that actually occupy a space and the animation shows the movement of those figures. Images are supposed to form the positive volume that delineates the empty space. A game adopts the cyberspace metaphor by engaging more players in the game, and then figuratively representing them on the screen as avatars. Games do not have to stop at the avatar-player level, but current implementations aiming for more immersive playing space (such as in Laser tag) take the form of augmented reality rather than cyberspace, fully immersive virtual realities remaining impractical.

Although the more radical consequences of the global communication network predicted by some cyberspace proponents (that is, the diminishing of state influence envisioned by John Perry Barlow[2]) failed to materialize and the word lost some of its novelty appeal, the term continues to be used.[3]

Some virtual communities explicitly refer to the concept of cyberspace, for example, Linden Lab calling their customers "Residents" of Second Life, while all such communities can be positioned "in cyberspace" for explanatory and comparative purposes (as Sterling did in The Hacker Crackdown and many journalists afterwards), integrating the metaphor into a wider cyber-culture.

The metaphor has been useful in helping a new generation of thought leaders to reason through new military strategies around the world, led largely by the U.S. Department of Defense (DoD).[4] The use of cyberspace as a metaphor has had its limits, however, especially in areas where the metaphor becomes confused with physical infrastructure.

Alternate realities in philosophy and art

Before cyberspace became a technological possibility, many philosophers suggested the possibility of a reality, or suggested that the reality in which we live in now is a reflection of some reality perhaps more pure than what we are aware of. In The Republic, Plato sets out his allegory of the cave, widely cited as one of the first conceptual realities. He suggests that we are already in a form of virtual reality which we are deceived into thinking is true. True reality for Plato is accessible only through mental training and is the reality of the forms. These ideas are central to Platonism and neoplatonism. Depending on how one views cyberspace in relation to physical reality, either people are living in a cyberspace-like reality in relation to a higher realm of ideas or cyberspace contains the abstract ideas that take form in the current, tangible reality.

Another forerunner of the modern idea of cyberspace is Descartes' hypothetical that people might be deceived by an evil demon which feeds them a false reality, and so the only thing one can be certain of is that one thinks; in other words, one is a thinking thing. This argument is the direct predecessor of the modern ideas of brain in a vat and many popular conceptions of cyberspace take Descartes' ideas as their starting point.

Visual arts have a tradition, stretching back to antiquity, of artifacts meant to fool the eye and be mistaken for reality. This questioning of reality occasionally led some philosophers and especially theologians to distrust art as deceiving people into entering a world which was not real (see Aniconism). The artistic challenge was resurrected with increasing ambition as art became more and more realistic with the invention of photography, film (see Arrival of a Train at a Station) and finally, immersive computer simulations.

American counterculture exponents like William S. Burroughs (whose literary influence on Gibson and cyberpunk in general is widely acknowledged[5]) were among the first to extol the potential of computers and computer networks for individual empowerment.[6]

Some contemporary philosophers and scientists (such as David Deutsch in The Fabric of Reality) use virtual reality in various thought experiments. Philip Zhai connects cyberspace to the platonic tradition:

Let us imagine a nation in which everyone is hooked up to a network of VR infrastructure. They have been so hooked up since they left their mother's wombs. Immersed in cyberspace and maintaining their life by teleoperation, they have never imagined that life could be any different from that. The first person that thinks of the possibility of an alternative world like ours would be ridiculed by the majority of these citizens, just like the few enlightened ones in Plato's allegory of the cave.[7]

The difference between the two can be further described using an analogy of physical (space itself is not physical though) space and concepts of reality. On one hand, human beings presuppose a frame of reference called "space." Whether the space people live in is an empty container like a repository (Newtonnian concept) or people exist in space according to the relationship between things (Leibnizian concept) is debatable; likewise, human beings relate to reality through perception (Kantian concept of space as a form of intuition) or through a nexus of meanings (concept of "lived space" in Phenomenology). Either way, human beings presuppose a plane of experience called "space." Within this space, humans physically experience reality through their five senses.

By extension, this sense of reality can be applied to imagined objects. Cyberspace is a frame of reference within which people can have quasi-real experiences with such objects; virtual reality refers to the simulated experiences with these objects.

Human experience of reality is also extended to non-physical events or phenomena such as death and associated emotional feelings about it. Fear, anxiety, joy, and other emotional feelings are real without association with the physical senses. At the same time, virtual reality may suggest a false reality that can be virtually experienced. Thus, the whole question of reality poses a series of questions beyond current epistemological models in modern philosophy, which presuppose the primacy of sense perception.