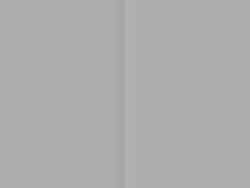 Cornsweet illusion. The left part of the picture seems to be darker then the right one. In fact they have the same brightness.

The Cornsweet illusion, as well as numerous other visual and perceptual illusions, provide a valuable way to investigate how the eye and brain process visual information. Equally, they are used by artists for visual effect, entertaining and satisfying the endless fascination human beings have with novelty and creativity. 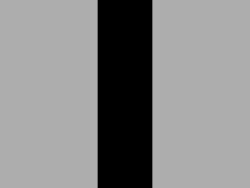 The same image as above, but the edge in the middle is hidden. The left and right part of the image now look the same color.

When looking at the classic Cornsweet illusion, two squares of differing contrast appear to be separated by a thin band of gradient. In reality, the two squares are exactly the same level of contrast. In some examples, the illusion is so convincing that the only way it can be believed is to cover over everything but the two identical colors, thus proving that they are indeed the same.

This phenomenon is similar to the familiar phenomenon of simultaneous contrast and Mach bands, but differs from it in two important respects. 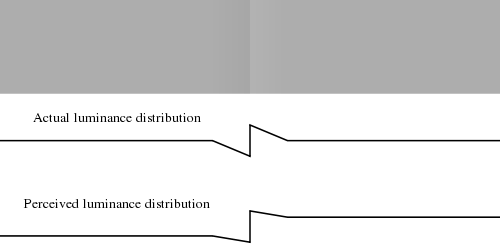 The Cornsweet illusion is an example of the way the brain uses the edges of shapes to impart information to the surrounding areas, and takes place because of the way nerve impulses travel through the visual cortex. The retina interprets what it sees using certain luminance profiles. The Cornsweet image is processed with nearly identical codes, which the cortex then integrates and arrives at the same perceptual result. In other words, the brain is used to seeing things a certain way, and often interprets information within those parameters.[3]

Retrieved from https://www.newworldencyclopedia.org/p/index.php?title=Cornsweet_illusion&oldid=1066968
Categories:
Hidden category:
This page was last edited on 6 April 2022, at 23:26.
Content is available under Creative Commons Attribution/Share-Alike License; additional terms may apply. See Terms of Use for details.