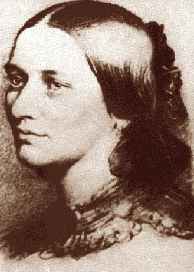 Clara Josephine Wieck Schumann (September 13, 1819 – May 20, 1896) was one of the most prominent pianists of the Romantic music era as well as a composer, and wife of composer Robert Schumann.

Her marriage to Robert Schumann had a profoundly stabilizing effect on her husband's psychological welfare and professional accomplishments. A gifted pianist, she nonetheless sacrificed her personal artistic aspirations to support her husband in the spirit of "true love." After Robert's death in 1856, she adopted the role of a "professional widow" often wearing mourning clothes as a tribute to her husband's memory. Although she established a reputation as an accomplished composer, a province historically dominated by men, a significant aspect of her legacy remains her undying devotion to the life and work of her husband, whose music she championed until her death in 1896. 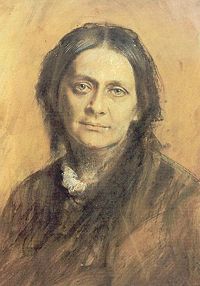 Clara Schumann trained from the age of five with her father, the well-known piano teacher Friedrich Wieck. Prior to beginning her lessons, young Clara had been a late-talker, only uttering her first words some time between four and five years old. In fact, she described herself as understanding as little as she spoke and as having disinterest in all that was passing around her, a condition that was not "entirely cured," as she put it, until she was eight years old. Clara Schumann's pattern of delayed speech and subsequent virtuosity is shared by other famous late-talkers such as fellow pianist Arthur Rubinstein, physicists Albert Einstein and Richard Feynman, and mathematician Julia Robinson among others.

Clara Schumann enjoyed a brilliant career as a pianist from the age of thirteen up to her marriage. Her marriage to Schumann was strenuously opposed to by her father, Friedrich Wieck, a renowned piano teacher in his own right. She continued to perform and compose after the marriage even as she raised seven children. An eighth child died in infancy.

In the various tours in which she accompanied her husband, she extended her own reputation farther than the outskirts of Germany, and it was in large part to her efforts that his compositions became generally known in Europe. Johannes Brahms, at age 20, met the couple in 1853 and his friendship with Clara Schumann lasted until her death. Brahms helped Clara through the illness of her husband with a caring that bordered on love. Later that year, she also met violinist Joseph Joachim who became one of her frequent performance partners. Schumann is credited with refining the tastes of audiences through her presentation of works by earlier composers including those of Bach, Mozart, and Beethoven as well as those of Robert Schumann and Brahms.

Clara Schumann often took responsibility for the finances and general domestic issues due to Robert's inclination to depression and instability. Part of her responsibility included generating income, which she did performing, in many cases, Robert's music. She continued to play, not only for financial stability, but because she wished not to be forgotten as a pianist. Her early life was that of a performer, thus she desired to continue performing. Robert, while admiring her talent, desired a more traditional wife to bear children and make a happy home, which in his eyes and the eyes of society were in direct conflict. Furthermore, while she loved touring, Robert disdained it and preferred to remain at his piano and compose.

From the time of her husband's death, she devoted herself principally to the interpretation of her husband's works. However, when she first visited England in 1856, the critics received Schumann's music with a chorus of disapproval. She returned to London in 1865 and continued her visits annually, with the exception of four seasons, until 1882. She also appeared there each year from 1885 to 1888. In 1878, she was appointed teacher of the piano at the Hoch Conservatorium at Frankfurt am Main, a post she held until 1892, and in which she contributed greatly to the improvement of modern piano playing technique.

Clara played her last public concert in 1891. She died five years later in 1896, due to complications from a stroke. As an artist she will be remembered, together with Joachim, as one of the first executants who really played like composers. Besides being remembered for her eminence as a performer of nearly all kinds of pianoforte music, at a time when such technical ability was considerably rarer than in the present day, she was an impressive composer in her own right. Additionally, she was the authoritative editor of her husband's music for the publishing firm of Breitkopf & Härtel.

She was buried at Bonn (Alter Friedhof/old cemetery). 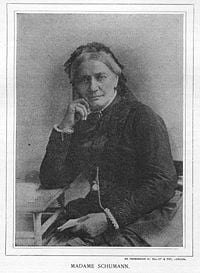 Clara Schumann, "One of the most soulful and famous pianists of the day," said Edvard Grieg.

Clara Schumann began her first composition, a Piano Concerto in A minor, at 14, which she completed at 16, and played with the Leipzig Gewandhaus orchestra, conducted by Felix Mendelssohn.

She considered herself a performing artist rather than a composer and no longer composed after age 36. It is suggested that this may have been the consequence of the then prevalent negative opinions of women's ability to compose, which she largely believed as her statements show: "I once believed that I possessed creative talent, but I have given up this idea; a woman must not desire to compose—there has never yet been one able to do it. Should I expect to be the one?" This belief influenced her composing, as well as, perhaps, the intimidating geniuses of Brahms and her husband, and, without doubt, the stress her fame placed on her marriage.

However, today her compositions are increasingly performed and recorded. Her works include songs, piano pieces, a piano concerto, a piano trio with violin and cello, choral pieces, and three Romances for violin and piano. Inspired by her husband's birthday, the three Romances were composed in 1853 and dedicated to Joseph Joachim who performed them for George V of Hanover. He declared them a "marvelous, heavenly pleasure."

Clara has composed a series of small pieces, which show a musical and tender ingenuity such as she has never attained before. But to have children, and a husband who is always living in the realm of imagination, does not go together with composing. She cannot work at it regularly, and I am often disturbed to think how many profound ideas are lost because she cannot work them out.«

—Robert Schumann in the joint diary of Robert and Clara Schumann.

Composing gives me great pleasure...there is nothing that surpasses the joy of creation, if only because through it one wins hours of self-forgetfulness, when one lives in a world of sound.«

—Clara herself on composing.

I once believed that I possessed creative talent, but I have given up this idea; a woman must not desire to compose—there has never yet been one able to do it. Should I expect to be the one?«

This is a partial list of recordings in the WorldCat database.