Chester Alan Arthur (October 5, 1829 – November 18, 1886) was a politician of the United States who served as the twenty-first President. Arthur was a member of the Republican Party and worked as a lawyer before becoming the twentieth vice president under James Garfield. Garfield was mortally wounded by Charles Guiteau on July 2, 1881, and died on September 19, at which time Arthur was sworn in as president, serving until March 4, 1885.

Before entering national politics, Arthur had been Collector of Customs for the Port of New York. He was appointed by Ulysses S. Grant but was fired by Rutherford B. Hayes under false suspicion of bribery and corruption. A political protégé of Roscoe Conkling, his notable achievements in office as President included civil service reform and the passage of the Pendleton Civil Service Reform Act. The passage of this legislation earned Arthur the moniker "The Father of Civil Service."

Arthur was born in the town of Fairfield, Vermont in Franklin County, Vermont, on October 5, 1829, although he sometimes claimed to be born in 1830. His parents were William Arthur and Malvina Stone. Political rivals long circulated the rumor that he had been born across the International Boundary in Canada in hopes of creating doubts as to his eligibility for the presidency under Article Two of the United States Constitution the president must be a natural-born citizen. The rumor is accepted as untrue.

Arthur spent some of his childhood years living in Perry, New York. One of Arthur's boyhood friends remembers Arthur's political abilities emerging at an early age: "When Chester was a boy, you might see him in the village street after a shower, watching the boys building a mud dam across the rivulet in the roadway. Pretty soon, he would be ordering this one to bring stones, another sticks, and others sod and mud to finish the dam; and they would all do his bidding without question. But he took good care not to get any of the dirt on his hands."

Arthur became principal of North Pownal Academy in North Pownal, Vermont, in 1851; later he studied law and was admitted to the bar in 1854. Arthur commenced practice in New York City, where he supported equal rights for blacks who objected to the racial segregation of Transportation in New York City. He also took an active part in the reorganization of the state militia.

Arthur married Ellen "Nell" Lewis on October 25, 1859. In 1860, they had a son, William Lewis Herndon Arthur, who was named after Ellen's father. This son died at age two of a brain disease. Another son, Chester Alan Arthur II, was born in 1864, and a girl, named Ellen Hansbrough Herndon after her mother, in 1871. Ellen "Nell" Arthur died of pneumonia on January 12, 1880, at the age of 42, only ten months before Arthur became President. While in the White House, Arthur would not give anyone the place that would have been his wife's. He asked his sister Mary, the wife of John E. McElroy, to assume certain social duties and help care for his daughter. President Arthur also had a memorial to his beloved "Nell"—a stained glass window was installed in Saint John's Episcopal church within view of his office and had the church lit at nights so he could look at it. The memorial is still there.

During the American Civil War, Arthur served as acting Quartermaster General of the State in 1861 and was widely praised for his service. He was later commissioned as Inspector General, and appointed Quartermaster General with the rank of Brigadier General and served until 1862. After the war, he resumed the practice of law in New York City. With the help of Arthur's patron and political boss Roscoe Conkling, Arthur was appointed by President Ulysses S. Grant as Collector of the Port of New York from 1871 to 1878.

This was an extremely lucrative and powerful position at the time, and several of Arthur's predecessors had run afoul of the law while serving as collector. Honorable in his personal life and his public career, Arthur nevertheless was a firm believer in the spoils system even as it was coming under vehement attack from reformers. He insisted upon honest administration of the Customs House in New York but staffed it with more employees than it really needed, retaining some for their loyalty as party workers rather than for their skill as public servants.

In 1878, Grant's successor, Rutherford B. Hayes attempted to reform the Customs House. He ousted Arthur, who resumed the practice of law in New York City. Conkling and his followers tried to win redress by fighting for the renomination of Grant at the 1880 Republican National Convention. Failing in that, they reluctantly accepted the nomination of Arthur as vice president.

Arthur was elected vice president on the Republican ticket with James Garfield in the 1880 presidential election. His term began on March 4, 1881. Upon Garfield's death on September 19, 1881, Arthur became President of the United States and was sworn in the following day.

Avoiding old political cronies, Arthur determined to go his own way once in the White House. He became a man of fashion, and was often seen associating with the elite of Washington, D.C., New York, and Newport. To the indignation of the stalwart Republicans, the onetime Collector of the Port of New York became, as President, a champion of civil service reform. Public pressure, heightened by the assassination of Garfield, forced an unwieldy Congress to heed the President.

In 1883, Congress passed the Pendleton Act, which established a bipartisan Civil Service Commission, forbade levying political assessments against officeholders, and provided for a "classified system" that made certain government positions obtainable only through competitive written examinations. The system protected employees against removal for political reasons.

Acting independently of party dogma, Arthur also tried to lower tariff rates so the government would not be embarrassed by annual surpluses of revenue. Congress raised about as many rates as it trimmed, but Arthur signed the Tariff Act of 1883 anyway. Aggrieved Westerners and Southerners looked to the Democratic Party for redress, and the tariff began to emerge as a major political issue between the two parties.

In 1884, the International Meridian Conference was held in Washington at President Arthur's behest. This established the Greenwich Meridian which is still in use today.

President Arthur demonstrated that he was above factions within the Republican Party, if indeed not above the party itself. Perhaps, in part, his reason was the well-kept secret he had known since a year after he succeeded to the Presidency, that he was suffering from Bright's Disease, a fatal kidney disease.

Arthur ran again in the Republican Presidential Primary in 1884 but lost the party's nomination to former Speaker of the United States House of Representatives, James G. Blaine of Maine.

Publisher Alexander K. McClure wrote, "No man ever entered the presidency so profoundly and widely distrusted, and no one ever retired…more generally respected." Author Mark Twain, deeply cynical of politicians, conceded, "It would be hard indeed to better President Arthur's administration." 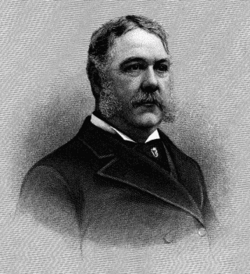 Arthur is remembered as one of the most society-conscious presidents, earning the nickname "the Gentleman Boss" for his style of dress and courtly manner.

Upon taking office, Arthur did not move into the White House immediately. He insisted upon its redecoration and had 24 wagon loads of furniture, some including pieces dating back to John Adams' term, carted away and sold at public auction, and Arthur commissioned Louis Comfort Tiffany to replace them with new pieces. A famous designer now best-known for his stained glass, Tiffany was among the foremost designers of the day. 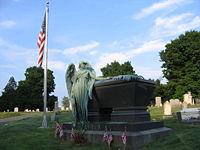 Arthur served as President through March 3, 1885. Upon leaving office, he returned to New York City where he died of a massive cerebral hemorrhage at 5:10 a.m. on Thursday November 18, 1886, at the age of 57. Arthur suffered from Bright's disease, and his death was most likely related to a history of hypertension.

His time as a former president was the second shortest, longer only than that of James Polk.

Chester was buried next to Ellen in the Arthur family plot in the Albany Rural Cemetery in Menands, New York, in a large sarcophagus on a large corner plot that contains the graves of many of his family members and ancestors.

Retrieved from https://www.newworldencyclopedia.org/p/index.php?title=Chester_A._Arthur&oldid=1003204
Categories:
This page was last edited on 9 February 2017, at 19:42.
Content is available under Creative Commons Attribution/Share-Alike License; additional terms may apply. See Terms of Use for details.