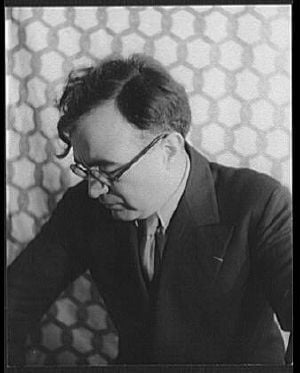 Carlos Antonio de Padua Chávez y Ramírez (June 13, 1899 – August 2, 1978) was a Mexican composer, conductor, teacher, journalist, and the founder and director of the Mexican Symphonic Orchestra. He was influenced by native Mexican cultures. Of his six Symphonies, his Symphony No. 2, which uses native Yaqui percussion instruments, is probably the most popular.

Carlos Chavez placed much emphasis on communicating to others through music education, writings, and the beauty of his compositions. He felt that music and human individuals formed a partnership and that nothing existed in isolation. As stated by the Universal Peace Federation in its Core Values and Principles, "Successful partnership has its foundation in unselfish give and take action." Carlos Chavez unselfishly gave to his audiences and especially re-acquainted the people of Mexico with their musical heritage.

His paternal grandfather José María Chávez, governor of Aguascalientes, Mexico, was ordered executed by Emperor Maximilian in 1864. His father, Augustín Chávez, invented a plough that was produced and used in the United States. He died when Carlos was barely three years old. Carlos had his first piano lessons from his brother Manuel, and later on he was taught by Asunción Parra, Manuel Ponce, and Pedro Luis Ozagón, for piano, and later Juan Fuentes for harmony. His family often went on vacations to Tlaxcala, Michoacán, Guanajuato, Oaxaca and other places where the cultural influence of the Aztec and other indigenous peoples was still very strong.

In 1916, Chávez and friends started a cultural journal, Gladios, and this led to Chávez joining the staff of Mexico City's newspaper El Universal in 1924.

After the Mexican Revolution and the installation of a democratically elected president, Álvaro Obregón, Chávez became one of the first exponents of Mexican nationalist music with ballets on Aztec themes.

In 1922, Chávez married Otilia Ortiz and they went on honeymoon to Europe, where he met Paul Dukas. After Europe, the couple vacationed in America, to which Chávez returned in 1926 and stayed in New York until 1928. Upon his return to Mexico, Chávez he became director of the Orquesta Sinfónica Mexicana (later renamed Orquesta Sinfónica de Mexico), Mexico's first permanent orchestra, started by a musicians' labor union. Chávez was instrumental in taking the orchestra on tour to Mexico's rural areas.

In 1928, Chávez was appointed director of the Conservatorio Nacional de Música, a position he held for six years. In that capacity, Chávez spearheaded projects to collect aboriginal folk music.

For part of the time that Arturo Toscanini was not conducting the NBC Symphony Orchestra in 1938, Chávez conducted a series of concerts with that orchestra. In 1940, he produced concerts at New York's Museum of Modern Art.

From 1947 to 1952, Chávez was director general of the Instituto Nacional de Bellas Artes. In 1947, he formed the Orquesta Sinfónica Nacional, which supplanted the older OSM as Mexico's premier orchestra and led to the disbanding of the older ensemble. Throughout all this time, Chávez maintained a busy international touring schedule. He died quietly while visiting his daughter outside of Mexico City.

The legacy of Carlos Chavez is in his use of nationalistic elements in his compositional works which brought back the Aztec background of the peoples of Mexico. He also sought to bring contemporary European music to his homeland, specifically, the music of Bartok, Honegger, Milhaud, Poulenc, Satie, Schoenberg, Varese, and Stravinsky to support the arts in Mexico. Although Chavez became disillusioned with the Mexican public since they did not openly embrace European contemporary music, he never gave up hope that some would someday form a partnership with music of all eras, races, cultures, and ethnicities.

Retrieved from https://www.newworldencyclopedia.org/p/index.php?title=Carlos_Chavez&oldid=1002687
Categories:
Hidden category:
This page was last edited on 13 January 2017, at 14:45.
Content is available under Creative Commons Attribution/Share-Alike License; additional terms may apply. See Terms of Use for details.