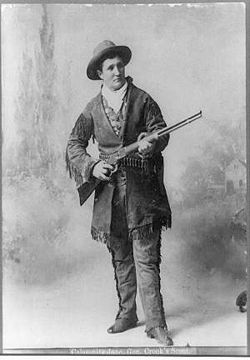 Calamity Jane at the age of 33. Photo by H.R. Locke

Martha Jane Canary-Burke, better known as Calamity Jane (May 1, 1852 - August 1, 1903), was a frontiers woman and professional scout. She gained fame fighting Native Americans. Many legends and stories have been told about her. It is difficult to sort fact from fiction in many cases, however she led a life of bravery and courage that few women of that time would have survived.

"Calamity" Jane was born Martha Jane Canary in Princeton, Missouri, the oldest of six children, having two brothers and three sisters. Jane was described as being attractive, with dark eyes. Her mother supplemented the family income by taking in washing from nearby mining camps. She died from pneumonia in 1866, and Jane's father died one year later in 1867. Jane lived for a time in Virginia City, Nevada. She received little to no formal education, but was literate. After her father's death, she took on the role as head of the household. At the age of sixteen she decided to moved her family to Fort Bridger, in Wyoming. She then moved them to Piedmont, Wyoming. She settled her siblings there and strove to create a home that would be welcoming.

Once the family was settled she moved on to a rougher, mostly outdoor adventurous life on the Great Plains. In 1870, she signed on as a scout, and adopted the uniform of a soldier. It is unclear whether she was actually enlisted in the United States Army at the time. From then on she mostly lost touch with her younger siblings, preferring to live a more wild and unsettled life. "Calamity Jane," as she would become known, lived a very colorful and eventful life. However, as historians have since discovered, she was gifted storyteller with a wonderful imagination and sometimes altered the facts to make her adventures more exciting to the listener.

Jane wanted to be a soldier. She even went so far as dressing in mens clothing. She joined General George Custer in 1870 as a scout. Her first assignment was in Arizona for the "Indian Campaign." It was her job to force the Native Americans onto reservations.

In 1872, she was sent to Fort Sanders, Wyoming, where the scouts were ordered out to the Muscle Shell or Nursey Pursey Indian outbreak. That campaign, in which Generals Custer, Miles, Terry, and Crook were engaged, lasted until the fall of 1873. Next, they were stationed at Goose Creek, Wyoming. Jane added the "calamity" to her her name during this time. The troops were sent out to handle a Native American uprising. Several days later on the way back to their camp, they were ambushed by a large group of Indians. Captain Egan, who was in command, was shot and thrown from his horse. Jane immediately upon seeing Captain Egan fall galloped over to him and lifted him up onto her horse and brought him to safety. Captain Egan soon recovered and said, "I name you Calamity Jane, the heroine of the plains."

In 1876, Calamity Jane left the army and settled in the area of Deadwood, South Dakota, in the Black Hills, and she became friends with Wild Bill Hickok and Charlie Utter, having traveled with them to Deadwood in Utter's wagon train. Calamity greatly admired Hickok and was keenly interested with his personality and life.

Jane was devastated when Wild Bill Hickok was shot in the back of the head while gambling in Deadwood on the August 2, 1876. Hickok was holding a pair of eights and a pair of aces when he was killed, which would forever be known as a "dead man's hand." The town of Deadwood closed down for the funeral, as everyone was in attendance. Jack McCall was later hanged for the murder.

Jane claimed that following Hickok's death, she went after Jack McCall, with a meat cleaver, having left her guns at her residence in the excitement of the moment. Following McCall's hanging for the offense, Jane continued living in the Deadwood area for some time, and at one point she helped save several passengers of an overturned stagecoach by diverting several Plains Indians who were in pursuit of the stage. The stagecoach driver, John Slaughter, was killed during the pursuit, and Jane took over the reins and drove the stage on into its destination.

Deadwood was the site of some major gold strikes and Jane worked as a bull whacker, hauling machinery and supplies from town to the mining camps. She also worked as a pony express rider and carried the United States mail between Deadwood and Custer cities. It was a fifty-mile trail and considered to be one of the roughest trails in those famous Black Hills. Calamity Jane was well respected for her horsemanship and ability to make the trip quickly and with little incident. This gained her new respect and admiration in the Deadwood area.

Having the reputation for being able to handle a horse better than most men and shoot like a cowboy, her skills took her into Buffalo Bill's Wild West Show in 1895 where she performed sharp shooting astride her horse. She toured Minneapolis, then Chicago, St. Louis, and Kansas City, bringing to the stage the west as she had lived it. Unfortunately Jane often misbehaved to the point of being fired. The Wild West show was no exception.

She traveled around the country and eventually, in 1903, died penniless and alone in Terry, South Dakota, near Deadwood, succumbing to complications from pneumonia. In accordance with her dying wish, she is buried next to Wild Bill Hickok in Mount Moriah Cemetery, overlooking the city of Deadwood.

Several films have been made about the life of Calamity Jane, the most famous being the musical of the same name starring Doris Day. The TV series Deadwood gives a realistic depiction of Jane.

Retrieved from https://www.newworldencyclopedia.org/p/index.php?title=Calamity_Jane&oldid=1095236
Categories:
Hidden category:
This page was last edited on 12 January 2023, at 23:47.
Content is available under Creative Commons Attribution/Share-Alike License; additional terms may apply. See Terms of Use for details.