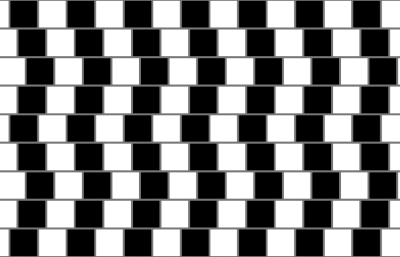 The café wall illusion is an optical illusion, first described by Richard Gregory. When offset dark and light tiles are alternated, they can create the illusion of tapering horizontal lines. The effect depends on the presence of a visible line of gray mortar between the tiles. It is known as the "café wall illusion" since being observed on the outside wall of a café. 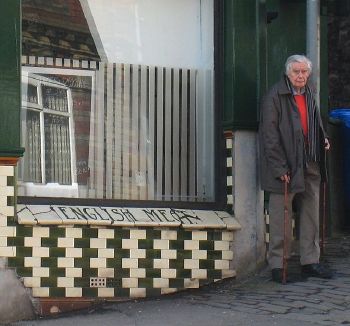 The café wall illusion was first reported by Richard Gregory, a professor of neuropsychology at the University of Bristol, together with Priscilla Heard. In 1979, a member of Gregory's lab observed the unusual visual effect created by the tiling pattern on the wall of the nearby café at the bottom of St Michael's Hill, Bristol. The café was tiled with alternate rows of offset black and white tiles, with visible mortar lines in between.[1] Gregory and Heard's findings surrounding the café wall illusion were first published in a 1979 edition of Perception.

The same effect is sometimes known as the Munsterberg illusion, as it was previously reported in 1897 by Hugo Munsterberg who referred to it as the "shifted chequerboard figure." It has also been called the "illusion of kindergarten patterns" because it was often seen in the weaving of kindergarten students.[2]

This illusion is created when offset rows of alternating dark and light tiles are surrounded by a visible line of mortar. Ideally, the mortar is a shade somewhere between the two tile colors. When the tiles are offset by half a tile width, the horizontal lines appear to slant diagonally, creating the appearance of wedges. The illusionary effect is affected by both the position of the tiles as well as the thickness and color of the grout in between them. If grout lines are removed, there is no longer any illusion of diagonal lines.

The café wall illusion is not well understood. Diagonal lines are perceived because of the way neurons in the brain interact. Different types of neurons react to the perception of dark and light colors, and because of the placement of the dark and light tiles, different parts of the grout lines are dimmed or brightened in the retina. The effect appears to involve interactions between the neurons in the visual cortex which code for orientation. However, it is unclear whether the effect is due to an inhibitory mechanism or if there is a kind of computational filter acting on input from cells operating at different spatial frequencies.[3] 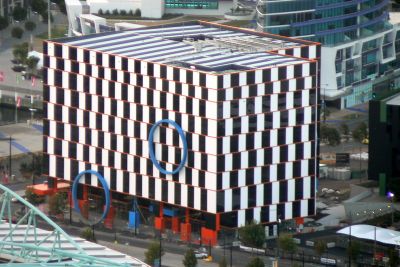 The café wall illusion has helped neuropsychologists study the way in which visual information is processed by the brain. The illusion has also been used in graphic design and art applications, as well as architectural applications.

Retrieved from https://www.newworldencyclopedia.org/p/index.php?title=Cafe_wall_illusion&oldid=1055923
Categories:
Hidden category:
This page was last edited on 27 July 2021, at 15:43.
Content is available under Creative Commons Attribution/Share-Alike License; additional terms may apply. See Terms of Use for details.