Saint Brendan of Clonfert, or Bréanainn of Clonfert (c. 484 – c. 577 C.E.), also known as "the Navigator," "the Voyager," or "the Bold" is one of the early Irish monastic saints whose legends are deeply ingrained in Irish folklore and history. He was one of the Twelve Apostles of Ireland[2] who is chiefly renowned for his legendary quest to the Isle of the Blessed. Some believe that Saint Brendan discovered the Americas before Christopher Columbus,[3] and his voyage is still commemorated in Ireland today.

Saint Brendan is known as the Patron Saint of sailors and travelers and his feast day is celebrated on May 16, in the Eastern Orthodox Church, Roman Catholic Church, and within the Anglican Communion.

In 484 C.E., Saint Brendan was born in Ciarraighe Luachra near the port of Tralee, in County Kerry, in the province of Munster, in the south west of Ireland.[4] He was baptized at Tubrid, near Ardfert, by Saint Erc. His early education was under Saint Ita, "the Brigid of Munster," and he completed his studies under Saint Erc, who ordained him priest in 512 C.E. Between the years 512 and 530 St Brendan built monastic cells at Ardfert, and, at the foot of Mount Brandon, Shanakeel—Seana Cill, usually translated as "the old church"—also called Baalynevinoorach. It was from here that he set out on his famous seven years voyage in search for the Land of Delight (The Garden of Eden). The old Irish Calendars assigned a special feast on March 22 to commemorate the voyage. The litany of St Aengus the Culdee, composed at the close of the eighth century, invokes "the sixty who accompanied St. Brendan in his quest for the Land of Promise." St Brendan is chiefly renowned for his legendary journey to The Isle of the Blessed (also called Tír na nÓg) as described in the ninth century Voyage of St Brendan the Navigator. Many versions exist of this story, that tell of how Brendan set out onto the Atlantic Ocean with sixty pilgrims (other versions have fourteen, plus three unbelievers who join at the last minute), searching for the Garden of Eden. If this voyage actually happened, it would have occurred in around the years 512-530 C.E., before his travel to the island of Great Britain. On his trip, Brendan is supposed to have seen a blessed island covered with vegetation. He also encountered a sea monster, an adventure he shared with his contemporary Saint Columba (521-597 C.E.). According to legend, Brendan landed on an island which turned out to be a giant sea monster called Jasconius or Jascon. This too, has its parallels in other stories, not only in Irish mythology but in other traditions, from Sinbad the Sailor to Pinocchio.

One of the earliest preserved written versions of the legend is in Dutch Des Reis van Sint Brandaen (Dutch for The Voyage of Saint Brendan), written in the twelfth century. Scholars believe it derived from a now lost middle High German text combined with Celtic elements from Ireland and combines Christian and fairy tale elements. Des Reis van Sint Brandaen describes "Brandaen," a monk from Galway, and his voyage around the world for nine years. The journey was begun as a punishment by an angel who had seen Brendan not to believe the truth of a book on the miracles of creation and saw Brandaen throw it into the fire. The angel tells him that truth has been destroyed. On his journeys, Brandaen encounters the wonders and horrors of the world, such as Judas frozen on one side and burning on the other, people with swine heads, dog legs and wolf teeth carrying bows and arrows, and an enormous fish that encircles the ship by holding its tail in its mouth. The English poem Life of Saint Brandan is a later English derivative of the Dutch version.

While it is generally assumed that the story is a religious allegory, there has been considerable discussion over the question of whether the legends are based on actual events, and whether the Isle of the Blessed that Brendan reached was actually America. There is a St. Brendan Society that celebrates the belief that Brendan was the first to discover America. Tim Severin demonstrated that it is possible that a leather-clad boat such as the one described in the Navigatio could have potentially reached North America.[5] Some have alleged that Christopher Columbus relied on the manuscript "Navigatio sancti Brendani abbatis" that told of St. Brendan's travels across the Atlantic.[6]

As a genre, The Voyage of St. Brendan (in Latin, the Navigatio Sancti Brendani) fits in with a then-popular form of literature, peculiar to Ireland, called an immram, that describes a hero's series of adventures in a boat. For example, there appear to be similarities with The Voyage of Bran that was written much earlier. In the Navigatio, this style of storytelling meshed with a religious ascetic tradition in which Irish monks traveled alone in boats, the same way their desert brothers used to isolate themselves in caves. 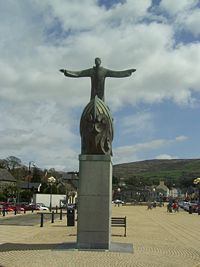 In his later life, St. Brendan travelled to Wales and the holy island of Iona, off the west coast of Scotland. It is said to have left traces of his apostolic zeal at Kil-brandon (near Oban) and Kil-brennan Sound. After a three years' mission in Britain he returned to Ireland, and did more proselytizing in various parts of Leinster, especially at Dysart (County Kilkenny), Killiney (Tubberboe), and Brandon Hill. He established churches at Inchiquin, County Galway and at Inishglora, County Mayo. He founded a bishopric at Annaghdown, where he spent the rest of his days. Centuries later this diocese was merged into the Archdiocese of Tuam. Having established the bishopric of Ardfert, St Brendan proceeded to Thomond, and founded a monastery at Inis-da-druim (now Coney Island), in the present parish of Killadysert, County Clare, about the year 550 C.E.

Saint Brendan's most celebrated foundation was Clonfert Cathedral, in the year 563 C.E., over which he appointed St. Moinenn as Prior and Head Master. St Brendan was interred in Clonfert.

In 1976, Irish explorer Tim Severin built an ox leather curragh and over two summers sailed her from Ireland via the Hebrides, Faroe Islands and Iceland to Newfoundland to demonstrate that the saint's purported voyage was feasible. On his voyage, he encountered various sights such as icebergs and sea animals such as whales and porpoises which he suggests are factual counterparts to the fantastic sights from the legends of Brendan.[7]

Naturally, the story of the seven years voyage was carried about, and soon crowds of pilgrims and students flocked to Ardfert. Thus, in a few years, many religious houses were formed—at Gallerus, Kilmalchedor, Brandon Hill, and the Blasket Islands—in order to meet the wants of those who came for spiritual guidance to Saint Brendan.

In the Sicilian town of Bronte there is a Church dedicated to Saint Brendan, whose name in the local dialect is "San Brandanu." Since 1574, the "Chiesa di San Blandano" (or Church of Saint Brendan) replaced a homonymous Chapel that existed previously in the same location. The real devotional reasons of such entitlement are still unknown.