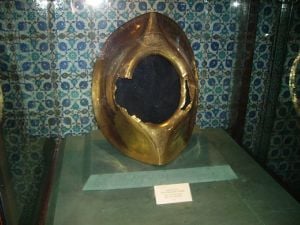 The Black Stone, surrounded by its silver frame and the black cloth kiswa on the Kaaba in Mecca

The Black Stone (called الحجر الأسود al-Hajar-ul-Aswad in Arabic) is a Muslim object of reverence, said by some to date back to the time of Adam and Eve.[1] It is the eastern cornerstone of the Ka'bah (the "cube"), the ancient building towards which all Muslims pray, in the center of Masjid al-Haram, the Grand Mosque in Mecca, Saudi Arabia.[2] The Stone is roughly 30 cm (12 in.) in diameter, and 1.5 meters above the ground.

When pilgrims circle the Ka'bah as part of the Tawaf ritual of the Hajj, many of them try, if possible, to stop and kiss the Black Stone, emulating the kiss that it received from Muhammad.[3] If they cannot reach it, they are to point to it on each of their seven circuits around the Kaaba.[4]

Today, the Stone is in pieces, from damage which was inflicted during the Middle Ages. It is now held together by a silver frame, which is fastened by silver nails to the Stone.

There are varying opinions as to the Stone's history and nature.

Many Muslims believe that the Stone fell from Heaven during the time of Adam and Eve, and that it was once pure and dazzling white, but has turned black because of the sins it has absorbed over the years.

Some say that the Stone was found by Abraham (Ibrahim) and his son Ishmael (Ismail)[5] when they were searching for stones with which to build the Ka'bah, around 1700-2000 B.C.E.[6] They recognized its worth and made it one of the building's cornerstones. It was also said that the stone was given to (Ibrahim) Abraham by the Archangel Gabriel.[7]

Non-Islamic historians point to the history of baetylus, or meteorite worship, in pre-Islamic Arabia, and say it is likely that the Stone is a meteorite.[8]

The Black Stone of Mecca was an object of veneration even before Muhammad. Early chroniclers say that the Ka'bah was rebuilt during Muhammad's lifetime, after damage caused by a flood. Around 600 C.E., the various tribes worked together on the project, but there was some contention among the Quraysh, Mecca's ruling clan, as to who should have the honor of raising the Black Stone to its final place in the new structure. Muhammad is said to have suggested that the Stone be placed on a cloak and that the various clan heads jointly lift it. Muhammad then allegedly placed the Stone into its final position with his own hands.[9]

When Umar ibn al-Khattab (580-644), the second Caliph, came to kiss the Stone, he said in front of all assembled: "No doubt, I know that you are a stone and can neither harm anyone nor benefit anyone. Had I not seen Allah's Messenger [Muhammad] kissing you, I would not have kissed you."[10] Many Muslims follow Umar: They pay their respects to the Black Stone in a spirit of trust in Muhammad, not with any belief in the Black Stone itself. This, however does not indicate their disrespect to the stone, but their belief that harm and benefit are in the hands of God, and nothing else.

Some say that the Stone is best considered as a marker, useful in keeping count of the ritual circumambulations (tawaf) one has performed.[11]

Some Muslims also accept a hadith from Tirmidhi, which asserts that at the Last Judgement (Qiyamah), the Black Stone will speak for those who kissed it:

There are conflicting stories about the reason why the Stone is in pieces. Some sources suggest that the damage occurred as the result of a theft in 930 C.E., when Qarmatian warriors sacked Mecca and carried the Black Stone away to their base in Bahrain. According to this version of the story, the Stone was returned twenty-two years later but in a cracked and damaged state.[12] According to the 1911 Encyclopedia Britannica, the damage occurred during a siege in 638 C.E.[13] Another account has the vandalism happening later, during a siege launched by a general of the Umayyad caliph Abd al-Malik (646-705).[14]