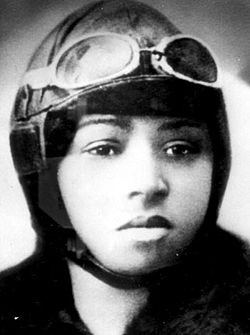 Bessie "Queen Bess" Coleman (January 26, 1892 – April 30, 1926) was a famous African American aviator. She became well known not only as a skilled aviator but also as the first African American woman in history to receive a pilot's license.

"Brave Bessie" or "Queen Bess," as she became known, was challenged by racial and gender discrimination in early twentieth-century America. She used her short life to advance equal rights for women and minorities.

Coleman was born in Atlanta, Texas; she was the tenth of thirteen children. Her father, George Coleman, was three-quarter Choctaw Indian. Her parents worked as sharecroppers. Her early childhood was reportedly a happy one; she often spoke of playing in the front yard or on the porch with her siblings. The Coleman family was religious and work stopped on Sunday mornings and afternoons to attend the local church.

As the other children began to grow and find work in the fields, Coleman assumed the responsibilities of housekeeping. She looked after her three younger sisters, helped her mother, Susan Coleman, work in her garden, and performed many of the everyday chores of running the house.

Colman was a highly motivated individual. Despite working long hours, she still found time to educate herself by borrowing books from a traveling library. She read the Bible every night often aloud to her family. Coleman began school at the age of six and had to walk four miles each day to her all-black, one-room school. Despite sometimes lacking such materials as chalk and pencils she was an excellent student. She loved literature and established herself as an outstanding math student. Coleman completed all eight grades of her one-room school.

Coleman’s routine of school, chores, and church was interrupted annually by the cotton harvest. Each man, woman, and child was needed to pick the cotton. It was hard, tiresome, tedious work that had to be done every year.

In 1901, her life took a dramatic turn. George Coleman left his family. He had become fed up with the racial barriers that existed in Texas. He returned to Oklahoma, or Indian Territory as it was then called, to find better opportunities, but Susan and the children did not go with him.

When she was 12 years old, Coleman was accepted into the Missionary Baptist Church. At age 18 she took all of her savings and enrolled in the Oklahoma Colored Agricultural and Normal University in Langston, Oklahoma. With only one term completed she ran out of money and was unable to continue her education. She returned home. In 1915, at the age of 23, she went to live with her brothers in Chicago. She attended beauty school and then started working as a manicurist in a local barbershop.

She worked at a supermarket as well as the barbershop during those years in Chicago. There she heard tales of war from pilots who were returning home from World War I. They told stories about flying in the war and Coleman started to fantasize about being a pilot. Her brother used to tease her by commenting that French women were better than African-American women because French women were pilots already. At the barbershop, Coleman met many influential men from the black community, including Robert S. Abbott, founder and publisher of the Chicago Defender, and Jesse Binga, a real estate promoter. Coleman received financial backing from Binga, and from the Chicago Defender, who capitalized on her dazzling personality and her beauty to promote his newspaper, and to promote her cause.

Coleman took French language class at the Berlitz school in Chicago, and then traveled to Paris on November 20, 1920. She could not gain admission to American flight schools because she was black and a woman. Coleman attended the well-known Caudron Brothers' School of Aviation in Le Crotoy, France. There she learned to fly using French Nieuport airplanes. On June 15, 1921, Coleman obtained her pilot's license from Federation Aeronautique Internationale after only seven months. She was the first black woman in the world to earn an aviator's license. After some additional training in Paris, Coleman returned to the United States in September 1921.

Coleman dreamed of opening a flying school for African Americans upon her return to the United States. Unfortunately her race and gender made a flight school impossible. She heard about exhibitions of stunt flying at county fairs and carnivals. Coleman learned she could make a decent living stunt flying, but she needed further training. Once again she was refused admission at American flight schools. She returned to Europe where she learned to fly as an aerial daredevil.

Coleman came back to the United States and began performing. Her first air show was on September 3, 1922, at Glenn Curtiss Field in Garden City, New York. Her performance at the air show was a great success and she became an overnight celebrity. Afterward she started touring the country giving exhibitions, flight lessons, and lectures.

Coleman always fought against racial inequities. She returned to her hometown to give an exhibition. Everyone, blacks and whites, were thrilled at the prospect and wanted to attend. However, the facility was segregated. Officials wanted whites and blacks to enter the venue through separate admission gates. Coleman refused to perform under those circumstances. She demanded only one admission gate. The officials finally relented and both races entered the airfield through the same gate, but then separated into their designated sections.

On April 30, 1926, Coleman had recently purchased a plane in Dallas, Texas, and had it flown to Jacksonville, Florida, in preparation for an air show there. Her friends and family did not consider the aircraft safe and implored her not to fly it. William Wills, her mechanic and publicity agent, was flying the plane with Coleman in the right seat. Coleman did not put on her seatbelt because she was planning a parachute jump for the next day and wanted to look over the cockpit to examine the terrain. About 12 minutes into the flight the plane did not pull out of a planned nosedive; instead it accelerated into a tailspin. Bessie Coleman was thrown from the plane at five hundred feet and died instantly when she hit the ground. William Wills was unable to gain control of the plane and it plummeted to the ground. Wills died upon impact and the plane burst into flames. Despite the badly burned plane, an investigation revealed that the crash was possibly due to a wrench that lodged in the control gears. Bessie Coleman is buried in Chicago's Lincoln Cemetery.

Her funeral was attended by ten thousand mourners. Many of them, including Ida B. Wells, were prominent members of black society. As the first African American woman pilot, she has been honored in several ways since her death: in 1931, a group of black male pilots performed the first yearly flyby over Coleman's grave; in 1977, a group of African American women pilots established the Bessie Coleman Aviators Club; and in 1995, she was honored with her image on a postage stamp by the United States Postal Service. The international terminal of O'Hare Airport in Chicago is located on Bessie Coleman Drive, as is the main street of the FAA Technical Center in Atlantic City.

Retrieved from https://www.newworldencyclopedia.org/p/index.php?title=Bessie_Coleman&oldid=1063321
Categories:
Hidden category:
This page was last edited on 21 January 2022, at 02:11.
Content is available under Creative Commons Attribution/Share-Alike License; additional terms may apply. See Terms of Use for details.