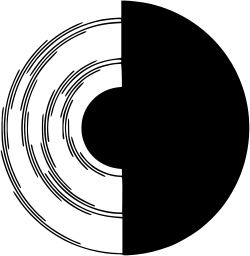 A sample of a Benham's disk.

Benham's top, also called Benham's disk, is named after the English toymaker Charles Benham, who sold a top painted with the pattern shown at right. When the disk is spun, arcs of pale color are visible at different places on the disk.

Although the cause of this illusion is not clearly understood, our discovery of and continued interest in such an effect reflect both the endless creativity and the appreciation for creativity that are to be found in human nature.

The discovery of the phenomenon is generally attributed to C. E. Benham, although Gustav Fechner and Hermann von Helmholtz had experimented with similar disks many years earlier. The discovery was described in Nature, 52:113-144 in 1894, and in 1895 Benham invented the toy which he called the "Artificial Spectrum Top," which became more commonly known as a "Benham top/disk".[1]

Scientists have long been puzzled over the phenomenon. The human retina is composed of both rods and cones; there are three types of cones that are sensitive to each of three colors of light (red, blue, and green). It is suggested that the colors in the Benham disk may be a result of the different response times of various cones. In this theory, the white part of the disk activates all three cones and the black half deactivates them. Because of the differing response times of the three types of cones, as well as the difference in time they remain activated, an imbalance of information is sent to the brain resulting in the perception of colors.

An alternate theory proposes that the spinning black and white areas activate neighboring areas of the retina differently, and the alternating response causes an interaction in the nervous system, generating the colors.

The generated colors have variously been referred to as "subjective colors," "Fechner-Benham colors," "polyphan colors," and "pattern-induced flicker colors" (PIFC's).[2]

Despite these theories, the reason behind the illusion remains a scientific mystery, and no theory yet explains the colors of Benham's disk completely.

Benham's top and other PIFCs are being researched for use as a diagnostic tool for diseases of the eye and the visual track. It has shown particular promise in detecting Optic neuritis.[3]

Retrieved from https://www.newworldencyclopedia.org/p/index.php?title=Benham%27s_top&oldid=1063216
Categories:
Hidden category:
This page was last edited on 20 January 2022, at 20:45.
Content is available under Creative Commons Attribution/Share-Alike License; additional terms may apply. See Terms of Use for details.