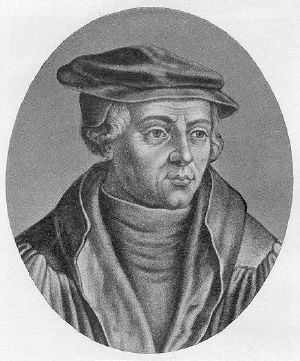 Beatus Rhenanus (August 22, 1485 - July 20, 1547), was a German humanist, religious reformer, and classical scholar. Educated at the famous Latin school in Schlettstadt, which produced a number of prominent scholars, and at the University of Paris, he became a dedicated scholar of the ancient classics and of German history. Beatus worked as editor and proof-reader at the humanist publishing houses of Johann Frobern and Johann Amerbach, preparing many Latin and Greek classics for publication and restoring damaged passages of ancient manuscripts. He also oversaw the publication of the works of many Lutheran writers and of humanists such as Thomas More. He was the faithful editor of the works of Erasmus, and later became his biographer and produced his complete works.

Strongly influenced by his teacher at the University of Paris, Jacobus Faber Stapulensis, who promoted a humanistic view of Aristotelianism, Beatus believed that the wisdom of the ancient classical writers with the truths revealed by Christian revelation supported each other. Rhenanus's own works include a biography of Johann Geiler von Kaisersberg (1510), the Rerum Germanicarum Libri III (1531), editions of Velleius Paterculus (1522), works on Tacitus (1519), Livy (1522), and a nine-volume work on his friend, Erasmus (1540-1541).

Beatus Rhenanus was born August 22, 1485, in Schlettstadt, Alsace, Germany. Rhenanus's father, Bild, was a prosperous butcher from Rheinau (the source of his name "Rhenanus"), and a town notable; he was president of the butchers’ association and burgomaster of Schlettstadt in 1495 and 1512. Beatus’ mother died just before his second birthday, and he was raised by a family servant and later by his uncle, Reinhart Kegler, chaplain of the Sainte-Catherine chapel at Saint-Georges de Sélestat. Two brothers, Antoine and Jean, died early in life. His father was able to provide Beatus with an excellent education. He attended the famous Latin school of Schlettstadt, which produced a number of prominent scholars and about which Erasmus remarked, “While other cities give birth only to men, you produce geniuses. Your fecundity enriches the universe!” (Eloge de Sélestat). He studied the classics under Crato Hoffmann and Hieronymus Gebwiller, and in 1503, went to the University of Paris, where he came under the influence of Jacobus Faber Stapulensis, an eminent Aristotelian.

In 1511, Beatus was considering traveling to the great centers of learning in Italy to improve his knowledge of Greek, when he learned that Johannes Cuno, a Dominican from Nuremberg and a pupil of Marcos Mousouros, was to give lessons in ancient Greek in Basel. He moved to Basel, where he befriended Desiderius Erasmus. During the early sixteenth century, Basel had achieved preeminence, along with Paris, as a center for humanism. Beatus became acquainted with the great humanist publishing houses of Johann Frobern and Johann Amerbach, and began working for Froben as a proof-reader and editor.

In 1526, after the Lutheran Reformation became more generally accepted, Beatus left Basel and returned to his birthplace, Schlettstadt, where he established himself in the family residence called "A l’Eléphant." His uncle had died in 1515, leaving all his goods to Beatus; the fortune inherited from his father and the income from a noble title he had been granted in 1523, enabled him to live comfortably for the rest of his life in study and speculation, as an erudite scholar and humanist. According to his biographers, he lived an ordered and punctual life, studying and researching late into the night, waking up late in the morning, taking walks in the town gardens, and sometimes meeting with friends or young students. He carried on a lively correspondence with many of the important intellectuals of Europe, and supervised the publishing of many of Erasmus's most important works. He was assisted in managing his affairs by his faithful secretary, Rudolph Bertsch, for whom he purchased a small house next to his own in Schlettstadt.

Beatus had long suffered from a bladder ailment, which grew worse with age. In 1546, he wrote only a handful of letters, and in 1547, his illness grew so severe that his doctor recommended a thermal cure at Wildbad. Arriving there, he realized that his strength was failing and asked to return to his native town. On the way back, he stopped at the Hotel Evermunster in Strasbourg. His secretary called several of his friends, Jean Sapidus, Martin Bucer, Jean Lenglin, and Luc Bathodius, to his bedside, as well as the burgomaster of Schlettstadt, Gervais Gebwiler, to whom Beatus confided his last wishes. He died in Strasbourg on July 20, 1547, and was interred at the parish church of Saint-Georges de Sélestat. He bequeathed his library to the parish church of Sélestat.

Beatus Rhenanus produced only a few original works, but he was a passionate scholar of the late Roman period and spent much of his time working on editions of classical authors and the works of the early Church fathers. In effect, he served as “director of publications” at the publishing houses of Matthias Schürer and Jean Froben, and consequently his scholarship made an imprint on numerous editions of classical and humanist works. He prepared texts for publication and restored a number of corrupt passages in old manuscripts. He also appears to have advised several artists, including Urs Graf and Ambrosius Holbein, on the creation of title pages. At the same time as he worked on the texts of the Church Fathers and classic authors such as Homer, Tertullius, Eusebius of Caesaria, Seneca, Tacitus, and Livy, he wrote prefaces for the works of Erasmus, Thomas More, and other humanists.

For seventeen years, until 1528, Beatus spent much of his time at Bâle, directing the publication of the works of Erasmus. He was a loyal and capable editor and at the same time, a literary critic who wished to share his own knowledge and insights. In 1525, after having assisted Erasmus with his edition of Pliny the Elder, Beatus published a separate commentary on the work under his own name. After he returned to his home town of Sélestat, Beatus continued to support Erasmus, assisting him with the publication of his edition of Origen, becoming his biographer and producing his complete works.

Rhenanus's own publications include a biography of Johann Geiler von Kaisersberg (1510), the Rerum Germanicarum Libri III (1531), and editions of Velleius Paterculus (1522), based on a manuscript he discovered himself. He also wrote works on Tacitus (1519), Livy (1522), and a nine-volume work on his friend Erasmus (1540-1541).

His teacher at the University of Paris, Jacobus Faber Stapulensis (Lefèvre), presented a unique humanist perspective on Aristotle which had a strong influence on Beatus. Lefèvre insisted on the study of Aristotle from the original Greek texts rather than the medieval translations of them, and rejected the commentaries on Aristotle as being obscure and misguided. He was more interested in metaphysics and moral philosophy than in natural philosophy and logic, and believed that the study of Aristotelian philosophy could lead to a deeper understanding of the Scripture and the Church Fathers, and of the mysticism of Christianity. Beatus adopted this vision and, in everything he did, worked to bring about harmony between Christianity and the teachings of Greek and Roman classical writers.

Beatus had a fear of the religious excesses which characterized the Reformation, and favored religious reform without breaking from Catholicism. He admired the ideas of Martin Luther and was an intimate friend of Zwingli, Bucer and Jean Sturm, but discreetly kept his name out of the Lutheran publications which he edited. Through his studies of the ancient classics and the Church Fathers, and the authors whose works he edited, he united ancient wisdom with Christian revelation, without sensing any betrayal or compromise. Observers often remarked on his refinement of character and on his calmness and serenity even during the most volatile discussions.

The library of Beatus Rhenanus, bequeathed to the parish church in the village of Sélestat and preserved with great care by the librarians there, is possibly the most representative humanist library to survive from the Renaissance. Beatus began collecting books at the age of fifteen, putting his seal on every new acquisition, writing on the title page the date, the purchase price, and the inscription, “Sum Beati Rhenani nec muto domino.” His first acquisitions were grammar books and works of literature. The core of his library was approximately fifty-seven books, including grammatical and rhetorical treatises and works by Italian humanists, such as Batista Guarino, Franciscus Niger, Augustinus Datus, and others. Beatus collected first editions of the classics, and he bought copies containing works by Virgil, Suetonius, Pliny The Younger, and Lucretius.

During his four years of study in Paris, he acquired at least one-hundred-and-eighty-eight books, mostly dealing with the works of Aristotle, and edited by his teacher Jacobus Faber Stapulensis (Lefevre d'Etaples). Each time he contributed to the publication of a book by one of the famous printing-houses of the north, he received a number of complimentary copies, which he then exchanged with friends and acquaintances. Many of his colleagues presented him with their publications, and a friend from Paris, Michael Hummelberg sent him fifteen books from Rome, most of them in Greek. The most important acquisition was the unique material assembled by his teacher, J. Cuno, over the years that he worked at the printing house of Aldus Manutius in Venice. The library is preserved as a cultural treasure at the Bibliotheque de Sélestat.[1]