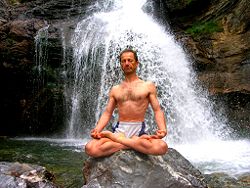 A practicioner of Yoga is seen here doing Padmasana (Lotus pose)—one of the postures (Asana) found in yogic practice.

Asana (Sanskrit: meaning "sitting down") refers to body positions that are prescribed in the practice of Yoga to cultivate physical discipline, improve the body's flexibility, and enable the practitioner to remain seated in meditation for extended periods. In Yoga terminology, asana denotes two things: the place where a practitioner sits and the manner (posture) in which he or she sits. In the authoritative Yoga Sutras of Patanjali, asana is described as being "seated in a position that is firm, but relaxed" (Ch. 2: 46). As the repertoire of postures has expanded and moved beyond the simple sitting posture over the centuries, modern usage has come to include variations from lying on the back and standing on the head, to a variety of other positions. In the Yoga sutras, Patanjali mentions the execution of an asana as the third of the eight limbs of Classical or Raja yoga (Ch. 2: 29).

The word asana in Sanskrit does appear in many contexts denoting a static physical position, although, as noted, traditional usage is specific to the practice of yoga. Traditional usage defines asana as both singular and plural. In English, plural for asana is defined as asanas. In addition, English usage within the context of yoga practice sometimes specifies yogasana or yoga asana, particularly with regard to the system of the Ashtanga Vinyasa Yoga.

Asana refers to various body postures that are practiced for disciplining the senses. This Sanskrit term literally means "seat," and originally referred mainly to seated positions. With the rise of Hatha yoga, it came to be used for yoga "postures" as well. According to Indian tradition, the highest form of yoga is known as Raja Yoga (Sanskrit: "Royal yoga"), also called "Ashtanga Yoga" ("Eight-Limbed Yoga"), and it is held to be authoritative by all schools of yoga. Raja Yoga aims at controlling all thought-waves or mental modifications. It is called the "King of the Yogas" because it is primarily concerned with the mind, which is traditionally conceived as the "king" of the psycho-physical structure that does its bidding. Because of the relationship between the mind and the body, the body must be first "tamed" through self-discipline and purified by various means. A good level of overall health and psychological integration must be attained before the deeper aspects of yoga can be pursued. Humans have all sorts of addictions and obsessions and these preclude the attainment of tranquil abiding (meditation). Through restraint (yama) such as celibacy, abstaining from drugs and alcohol, and careful attention to one's actions of body, speech and mind, the human being becomes fit to practice meditation. This yoke that one puts upon oneself (discipline) is another meaning of the word yoga.

Patanjali's famous Yoga Sutra describes asana as the third of the eight limbs of classical, or Raja Yoga. Among these practices, asanas are the physical movements of yoga practice and, in combination with pranayama or breathing techniques constitute the style of yoga referred to as Hatha Yoga. Patanjali describes asana as a "firm, comfortable posture," referring specifically to the seated posture, most basic of all the asanas. He further suggests that meditation is the path to samadhi (transpersonal self-realization). They are part of a larger system called Raja/Ashtanga Yoga, whose eight limbs are summarized as follows:

In the West, the asanas (physical aspect of yoga) has been much popularized, and devoted celebrity practitioners like Madonna and Sting have contributed to the increased visibility of the practice. However, the emphasis on physical positions has given rise to the perception that yoga consists only of asana practice, which is traditionally incorrect. A more spiritual purpose is to quiet the mind, to understand one's true nature, and to facilitate the flow of prana to aid in balancing the koshas (sheaths) of the physical and metaphysical body. Depending on the level of mastery, the practitioner of asanas is supposed to achieve many supernatural abilities. For instance, a yogi who has mastered Mayurasana is said not to be affected by eating any poison. Nevertheless, the practice of asanas is allegedly associated with health benefits such as the following: 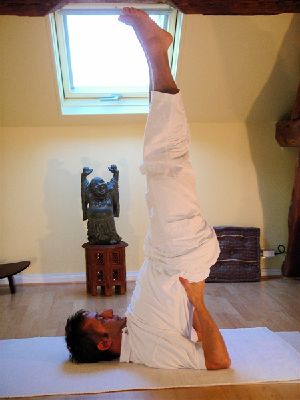 In his The Complete Illustrated Book of Yoga (1959), Swami Vishnu-devananda published a compilation of 66 basic postures and 136 variations of those postures. Sri Dharma Mittra suggested that there are an infinite number of asanas and in 1975, he set out to catalogue the vast number in the Master Yoga Chart of 908 Postures, as an offering of devotion to his guru, Swami Kailashananda Maharaj. Through this effort, he compiled 1300 variations, derived from gurus, and yogis, as well as both ancient and contemporary texts.[1] Although it is impossible to establish a complete and exact set of yoga postures, this work is considered a leading collection by students and yogis alike.[2][3]

In the Yoga Sutra, Patanjali suggests that the only requirement for practicing asanas is that it be "steady and comfortable".[4] The body is held poised, and relaxed, with the practitioner experiencing no discomfort.

When control of the body is mastered, practitioners free themselves from the duality of heat/cold, hunger/satiety, joy/grief, which is the first step toward the unattachment that relieves suffering.[5] This non-dualistic perspective comes from the Sankya school of the Himalayan Masters.[6]

Listed below are traditional practices for performing asana:

One of the common practices in yoga is the Surya Namaskara, or the Sun Salutation, is a form of worshiping Surya, the Hindu solar deity by concentrating on the Sun, for vitalization. The physical aspect of the practice links together twelve asanas in a dynamically expressed series. A full round of Surya namaskara is considered to be two sets of the twelve poses, with a change in the second set where the opposing leg is moved first. The asanas included in the sun salutation differ from tradition to tradition.

Retrieved from https://www.newworldencyclopedia.org/p/index.php?title=Asana&oldid=868159
Categories:
Hidden category:
This page was last edited on 30 November 2008, at 16:04.
Content is available under Creative Commons Attribution/Share-Alike License; additional terms may apply. See Terms of Use for details.