An armored fighting vehicle (AFV) is a military vehicle that is protected by armor and armed with weapons. Most AFVs are equipped for driving in rugged terrain. These vehicles are classified according to their characteristics and intended role on the battlefield. Examples of AFVs include tanks, which are designed primarily to engage enemy forces in the frontal assault role, armored personnel carriers (APCs) that transport infantry, and infantry fighting vehicles (IFVs) that allow infantry to fight from within the vehicle. Successful, general-purpose AFVs often serve as the base of a whole family of specialized vehicles. 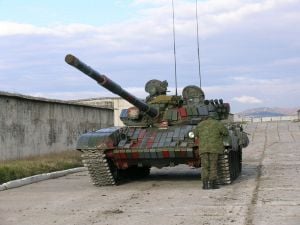 The tank is an all-terrain, armored fighting vehicle, designed primarily to engage enemy forces by the use of direct fire in the frontal assault role. Though several configurations have been tried, particularly in the early experimental days of tank development, a standard, mature design configuration has since emerged to a generally accepted pattern. This features a main artillery gun, mounted in a fully rotating turret atop a tracked automotive hull, with various additional machine guns throughout.

Philosophically, the tank is, by its very nature, a purely offensive weapon. Being a protective encasement with at least one gun position, it is essentially a pill box or small fortress (though these are static fortifications of a purely defensive nature), that can move toward the enemy—hence its offensive utility.

Historically, tanks have been divided into three categories:

Other designations (such as Cavalry Tank, Cruiser Tank, Infantry Tank) have been used by various countries to denote similar roles.

A modern, main battle tank incorporates advances in automotive, artillery, and armor technology to combine the best characteristics of all three historic types into a single, all-around type. It is distinguished by its high level of firepower, mobility, and armor protection relative to other vehicles of its era. It can cross comparatively rough terrain at high speeds, but is fuel, maintenance, and ammunition-hungry which makes it logistically demanding. It has the heaviest armor of any vehicle on the battlefield, and carries a powerful weapon that may be able to engage a wide variety of ground targets. It is among the most versatile and fearsome weapons on the battlefield, valued for its shock action against other troops and high survivability. 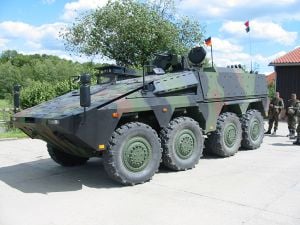 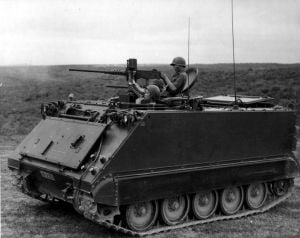 The M113, one of the most common tracked APCs, on duty during the Vietnam War.

Armored personnel carriers (APCs) are light armored fighting vehicles for the transport of infantry. They usually have only a machine gun although variants carry recoilless rifles, anti-tank guided missiles (ATGMs), or mortars. They are not really designed to take part in a direct-fire battle, but to carry the troops to the battlefield safe from shrapnel and ambush. They may have wheels, tracks, or both as in the half-track. Examples include the American M113 (tracked), the British FV 432 (tracked), the Dutch/German Boxer MRAV (wheeled), the French VAB (wheeled), the Soviet BTR (wheeled), and the American M3 (half-tracked).

The first attempt to carry troops in an armored tracked vehicle was made by the British in the First World War, a lengthened Mark V* tank that could house a squad of infantry while still armed as a tank. Post-war, the idea was largely dropped in favour of trucks, small infantry carriers, and lightly-armored half-tracks, which were widely used during the Second World War. During WWII, there were some experiments into heavily armored carriers, such as the Kangaroos, converted by stripping turrets from tanks. After the war, there was a shift away from half-tracks to tracked or wheeled armored personnel carriers (APCs), usually armed with a machine gun for self-defense. A new one, currently being built for the Israeli Defence Forces, is the Wolf.

Infantry Mobility Vehicle (IMV) is a modern term for a wheeled armored personnel carrier (APC) which serves as a military patrol, reconnaissance or security vehicle. The distinction between it and an armored car being the ability to carry a unit of infantry. Modern examples include the ATF Dingo, Bushmaster IMV, Stryker Infantry Carrier Vehicle (ICV) and vehicles being fielded as part of the MRAP program.

An infantry fighting vehicle (IFV) is an armored personnel carrier that allows the infantry to fight from inside, and can provide significant fire support. The first IFV was the Soviet BMP-1, which surprised the western intelligence analysts when it appeared in a military parade in 1967. 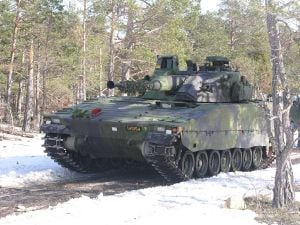 Modern IFVs are well-armed infantry carriers that allow the infantry inside to fight from within the vehicle. They are different from earlier APCs by their heavier armament allowing them to give direct-fire support during an assault, firing ports allowing the infantry to fire personal weapons while mounted, and improved armor. They are typically armed with a twenty millimeter or larger autocannon, and possibly with ATGMs. IFVs are usually tracked, but some wheeled vehicles fall into this category, too.

Specially-equipped IFVs have taken on some of the roles of light tanks; they are used by reconnaissance organizations, and light IFVs are used by airborne units which must be able to fight without the heavy firepower of tanks.

By comparison the Israeli Merkava is a main battle tank with the ability to carry a section of infantry.

Self-propelled artillery are artillery pieces that have been given their own integral transport by mounting them on tracked or wheeled chassis. They are usually armored as well. The mobility provided allows artillery to keep up with the pace of armored warfare, and gives them minimal protection from counter-battery or small arms fire. Like towed artillery, a battery of self-propelled guns must still set up in a relatively safe area to perform fire missions, but is able to relocate more quickly.

Assault guns are self-propelled artillery pieces intended to support infantry in the direct-fire role. They usually have a large-caliber gun capable of firing a heavy high-explosive shell, effective against dug-in troops and fortifications.

Self-propelled anti-tank guns, or tank destroyers, are used primarily to provide antitank support for infantry or tank units, in defensive or withdrawal operations. They may mount a high-velocity anti-tank gun or sometimes an antitank guided missile launcher, or ATGM.

Gun-armed tank destroyers have been largely supplanted by the more general-purpose tanks and ATGM launchers since Second World War, with lightly-armored ATGM carriers used for supplementary long-range antitank capabilities, and to replace tanks in light or airborne forces.

A tankette is a small armored fighting vehicle with a crew of one or two, similar to a tank, intended for infantry support or reconnaissance. Most had no turret and were armed with one or two machine guns, or rarely with a heavier gun or grenade launcher. Tankettes were produced between about 1930 and 1941, but the concept was abandoned because of its limited utility and vulnerability to anti-tank weapons. Their role was largely taken over by armored cars.

A classic design was the British Carden Loyd tankette—many others were modeled after it. Japan was among the most prolific users of tankettes, producing a number of designs, which they found useful for jungle warfare.

Other tankettes are the British Universal carrier and the Polish TKS.

Retrieved from https://www.newworldencyclopedia.org/p/index.php?title=Armored_fighting_vehicle&oldid=1059888
Categories:
Hidden category:
This page was last edited on 7 November 2021, at 11:51.
Content is available under Creative Commons Attribution/Share-Alike License; additional terms may apply. See Terms of Use for details.