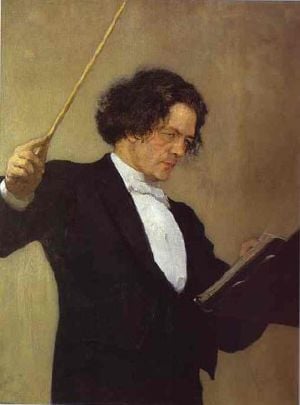 Anton Grigorevich Rubinstein (Russian: Антон Григорьевич Рубинштейн) (November 28, 1829 – November 20, 1894) was a Russian pianist, composer and conductor. As a pianist he was regarded as a rival and contemporary of Franz Liszt, and he ranks amongst the greatest of keyboard virtuosi. Anton Rubenstein felt that the realization of true piano performance entailed a principled, human effort. He lived his life in taking responsibility to inculcate a personal transformation in musicians and audiences through the illustrious music for the piano.

Rubinstein was born to Jewish parents in Vikhvatinets (now in Transnistria, Republic of Moldova). He learned the piano from an early age, and made his first public appearance at the age of nine. His teacher, Alexander Villoing, took him to Paris, where he played for Chopin and Franz Liszt, and heard them play. In Berlin, he and his brother Nikolai studied composition and theory with Siegfried Dehn. Here he met with, and was supported by, Felix Mendelssohn and Giacomo Meyerbeer. He then moved to Vienna, where he briefly taught, before returning to Russia in 1848 where he worked as a musician to the sister-in-law of the Tsar.

He began to tour again as a pianist in the late 1850s, before settling in St. Petersburg, where in 1862 he founded the St. Petersburg Conservatory, the first music school in Russia. He also continued to make tours as a pianist, and spent a short stint teaching in Dresden towards the end of his life. 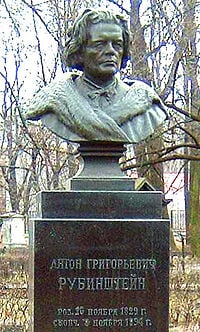 Portrait bust of Anton Rubinstein on his grave in Tikhvin Cemetery, Saint Petersburg.

Rubinstein died in Peterhof, having suffered from heart disease for some time. All his life he had felt himself something of an outsider; he wrote of himself in his notebooks:

“Russians call me German, Germans call me Russian, Jews call me a Christian, Christians a Jew. Pianists call me a composer, composers call me a pianist. The classicists think me a futurist, and the futurists call me a reactionary. My conclusion is that I am neither fish nor fowl – a pitiful individual”.

The street in St. Petersburg where he lived is now named after him.

Rubinstein was a prolific composer, writing no less than twenty operas (notably Demon, written after Lermontov's Romantic poem), five piano concerti, six symphonies and a large number of solo piano works along with a substantial output of works for chamber ensemble, two concertos for cello and one for violin, free-standing orchestral works and tone poems (including one entitled Don Quixote). 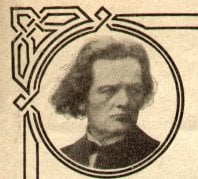 Rubinstein's music demonstrates none of the nationalism of The Five, and in fact he spoke out against Russian nationalism, leading to arguments with Mily Balakirev and others who felt that his establishment of a Conservatory in St. Petersburg would damage Russian musical traditions. In the tirades of the Russian nationalists, the Jewish birth of Anton and his brother was frequently held against them. Nonetheless, it is Nikolai Rubinstein's pupil Tchaikovsky who has become perhaps popularly identified with Russia more than any other composer.

Following Rubinstein's death, his works began to be ignored, although his piano concerti remained in the repertoire in Europe until the First World War, and his principal works have retained a toehold in the Russian concert repertoire. Falling into no dynamic tradition, and perhaps somewhat lacking in individuality, Rubinstein's music was simply unable to compete either with the established classics or with the new Russian style of Stravinsky and Prokofiev. Rubinstein had consistently identified himself with the more conservative traditions in European music of his time. He had little time for the music of Richard Wagner and other musical radicals. Mendelssohn remained an idol throughout Rubinstein's life; he often performed his music in his own recitals; his own solo piano music contains many echoes of Mendelssohn, Frédéric Chopin and Robert Schumann.

Over recent years, his work has been performed a little more often both in Russia and abroad, and has often met with positive criticism. Amongst his better known works are the opera The Demon, his Piano Concerto No. 4, and his Symphony No. 2, known as The Ocean.

The legacy of Anton Rubenstein was the prowess he displayed on the piano wherein he could coax a beautiful tone, along with a rhythmic flexibility, from the piano with a dexterious use of the pedal for subtle nuances in chords and tones. He helped to found the St. Petersburg Conservatory of Music in the hopes that he could share his talent with any pianist who was disciplined enough to study and practice the piano. Teaching and performing became his lifestyle which greatly influenced the musical culture of Russia.

Anton Rubinstein was the brother of the pianist and composer Nikolai Rubinstein, but was no relation to the twentieth-century pianist Arthur Rubinstein.