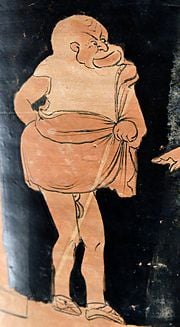 Comedy, together with tragedy was one of two principal dramatic forms of ancient Greek theater. Athenian comedy is conventionally divided into three periods: Old Comedy, Middle Comedy, and New Comedy. Old Comedy survives today largely in the form of the eleven surviving plays of Aristophanes, while New Comedy is known primarily from the substantial papyrus fragments of Menander. Middle Comedy is largely lost, i.e. preserved only in relatively short fragments in authors such as Athenaeus of Naucratis.

The Old Comedy, dating from the establishment of democracy by Kleisthenes, about 510 B.C.E., arose from the obscene jests of Dionysian revelers, composed of virulent abuse and personal vilification. The satire and abuse were directed against some object of popular dislike. The comedy used the techiques of tragedy, its choral dances, its masked actors, its meters, its scenery and stage mechanism, and above all the elegance of the Attic language, but used for the purpose of satire and ridicule. Middle Comedy omitted the chorus, and transferred the ridicule from a single personage to human foibles in general. The transition in comedy from old to middle represented a major step forward in the artistic nature of comedic drama, from one of pure ridicule to addressing the larger question of the foibles of human nature.

At Athens the comedies became an official part of the festival celebration in 486 B.C.E., and prizes were offered for the best productions. As with the tragedians, few works still remain of the great comedic writers. Of the works of earlier writers, only some plays by Aristophanes exist. These plays represent an important advance in comic presentation. He poked fun at everyone and every institution. Aristophanes is the ancestor for much of later comic theater. For boldness of fantasy, for merciless insult, for unqualified indecency, and for outrageous and free political criticism, there is nothing to compare to the comedies of Aristophanes.

During the fourth century B.C.E., there developed what was called the New Comedy. Menander is considered the best of its writers. Nothing remains from his competitors, however, so it is difficult to make comparisons. The plays of Menander, of which only the Dyscolus (Misanthrope) now exists, did not deal with the great public themes about which Aristophanes wrote. He concentrated instead on fictitious characters from everyday life: stern fathers, young lovers, intriguing slaves, and others. In spite of his narrower focus, the plays of Menander influenced later generations. They were freely adapted by the Roman poets Plautus and Terence in the third and second centuries B.C.E. The comedies of the French playwright Molière are reminiscent of those by Menander. 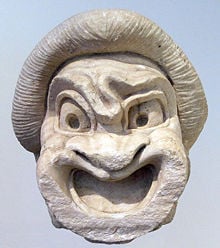 There is little exact information regarding the origin and early development of ancient Greek comedy. According to Aristotle, writing a century and a half later, it first took shape in Megara and Sicyon; Susarion, the earliest Athenian comic poet, is himself supposed to have come from Megara. Aristotle also connects the origin of Comedy with popular phallic processions, and claims that it received official recognition (and thus state support) in Athens somewhat later than tragedy did. The Suda, supplemented by some inscriptional evidence, suggests that the earliest dramatic competitions in Athens took place at the City Dionysia festival in the early 480s B.C.E., and that a second competition was added at the Lenaea festival around 450. But comedies of some sort written by Epicharmus were performed already in the 490s in the Greek city of Syracuse in Sicily, and the origins of the genre cannot in fact be determined with any precision. The name itself apparently comes from the Greek words komos, which means reveling band, and the verb aeido, to sing.

Comedies were performed in Athens in formal competitions at two major festivals in honor of Dionysus, the god of wine and revelry, now associated with theater. Each festival seems to have featured five comic poets staging a single play apiece, although it is possible that programs were reduced to three poets for a period due to the financial pressures of the Peloponnesian War. Poets applied to the archon in charge of the relevant festival for the right to participate in it. If chosen, they were awarded a choregos, i.e. a wealthy man who funded the performance as a form of taxation.

In ancient Greece, comedy seems to have originated in bawdy and ribald songs or recitations apropos of fertility festivals or gatherings, or also in making fun at other people or stereotypes. Aristotle, in his Poetics, states that comedy originated in Phallic songs and the light treatment of the otherwise base and ugly. He also adds that the origins of comedy are obscure because it was not treated seriously from its inception.[1]

The Alexandrine grammarians seem to have been the first to divide Greek comedy into what became the canonical three periods:[2] Old Comedy (archàia), Middle Comedy (mese) and New Comedy (nea). These divisions appear to be largely arbitrary, and ancient comedy almost certainly developed constantly over the years.

The earliest Athenian comedy, from the 480s to 440s B.C.E., is almost entirely lost.

In order to impress the refined and cultured community of Athens in the age of Pericles, the dramatists of the Old Comedy borrowed all its most attractive features from tragedy: choral dances, masked actors, poetic meters, scenery and stage mechanisms, and the dramatic form of Attic Greek. Thus comedy became a recognized branch of the drama, presenting brilliant dialogue and poetic beauty in the choral parts comparable to tragedy plays of the same period.

The most important dramatist of the Old Comedy was Aristophanes. His works define the legacy of Old Comedy, with their pungent political satire and abundance of sexual and scatological innuendo. Aristophanes lampooned the most important personalities and institutions of his day, as can be seen in his buffoonish portrayal of Socrates in The Clouds, and in his anti-military farce Lysistrata. In The Birds he held up Athenian democracy to ridicule. Only 11 of his plays have survived.

Led by the title character, Lysistrata, the story's female characters barricade the public funds building and withhold sex from their husbands to end the Peloponnesian War and secure peace. In doing so, Lysistrata engages the support of women from Sparta, Boeotia, and Corinth. All of the other women are first against Lysistrata's suggestion to withhold sex. Finally, they agree to swearing an oath of allegiance by drinking wine from a phallic shaped flask, as the traditional implement (an upturned shield) would have been a symbol of actions opposed to the aims of the women. This action is ironic and therefore comical, because Greek men believed women had no self-restraint, a lack displayed in their alleged fondness for wine as well as for sex.

The Frogs had a more serious tone than some of Aristophanes other comedies. However, The Frogs is unique in its structure, because it combines two forms of comic motifs, a journey motif and a contest motif or agon motif, with each motif being given equal weight in the play.

The Old Comedy subsequently influenced later European writers such as Rabelais, Cervantes, Swift, and Voltaire. In particular, they copied the technique of disguising a political attack as buffoonery.

The legacy of Old Comedy can be seen in contemporary times in political satires such as Dr. Strangelove and in the televised buffoonery of Monty Python and Saturday Night Live.

The period of the Middle Comedy extended from the close of the Peloponnesian War to the enthrallment of Athens by Philip of Macedon; that is, from the closing years of the fifth century B.C.E. to nearly the middle of the fourth century B.C.E.. It was extremely prolific in plays, but not especially so in genius. The favorite themes were the literary and social peculiarities of the day, which, together with the prominent systems of philosophy, were treated with light and not ill-natured ridicule. The Middle Comedy freely parodied the grandest tragedies of Aeschylus and Sophocles, the noblest passages of Homer, and the most beautiful lyrics of Pindar and Simonides. Subjects taken directly from ancient mythology were treated in the same way. In dealing with society, classes rather than individuals were attacked, as courtesans, parasites, revelers, and especially the self-conceited cook, who, with his parade of culinary science, was always a favorite target for the shafts of middle comedy.

Molded terracotta figurine of an actor wearing the mask of a bald-headed white man, from the New Comedy, second century B.C.E., from Canino, Italy.

The new comedy lasted throughout the reign of the Macedonian rulers, ending about 260 B.C.E.

Very little of the text of the New Comedy has survived. A few Greek fragments have come down to us. During the twentieth century the complete text of Dyskolos, a play by Menander, the leading writer of New Comedy, was rediscovered. It is the only example of New Comedy to have survived in its entirety. A few long fragments by Menander have survived as well from such plays as The Arbitraton, The Girl from Samos, The Shorn Girl, and The Hero). Much of our information about the New Comedy is derived from the Latin adaptations by Plautus and Terence.

For the first time love became a principal element in the drama. The New Comedy relied on stock characters such as the senex iratus, or "angry old man," the domineering parent who is all too often led into the vices and follies for which he has reproved his son, and the bragging soldier or mercenary soldier newly returned from war with a noisy tongue, a full purse and an empty head. With these exceptions, the characters were very much the same as in the middle comedy. The new comedy represented Athenian society and the social morality of the period; but it made no attempt to improve it, presenting only in attractive colors.

The New Comedy influenced much of Western European literature, in particular the comic drama of Shakespeare and Ben Jonson, Congreve and Wycherley.[3]

Much of contemporary romantic and situational comedy descends from the New Comedy sensibility, in particular generational comedies such as All in the Family and Meet the Parents.

Some dramatists overlap into more than one period.