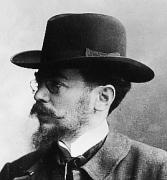 Alfred Hermann Fried (November 11, 1864 - May 5, 1921), was an Austrian Jewish pacifist, publicist, journalist, co-founder of the German peace movement, and co-winner with Tobias Asser of the Nobel Peace Prize in 1911.

Influenced by Bertha von Suttner (Nobel Peace Prize for 1905), Fried became interested in the peace movement and co-founded the Deutsche Friedensgesellschaft (German Peace Society) with her. He also edited its major publication, Monatliche Friedenskorrespondenz (Monthly Peace Correspondence), from 1894 to 1899. After convincing Baroness von Suttner to serve as editor, he started a peace journal, naming it Die Waffen Nieder! (Lay Down Your Arms!) the title of the Baroness' famous 1889 antiwar novel.

As a prominent member of the Esperanto movement, he expressed his support of creating an easy and flexible language that would serve as a universal second language to foster peace and international understanding with the publication of his book Lehrbuch der internationalen Hilfssprache Esperanto (Textbook of the International Language of Esperanto) (1903).

Fried portrayed his brand of pacifism as hard-headed and criticized pacifists like Leo Tolstoy for being too romantic and for placing to much faith in the power of morality. He placed more reliance on economic cooperation and political organization amongst nations as bases for peace.[1]

Fried was born in Vienna to a Jewish family. At the age of 15, he left formal schooling to start work in a book store in Vienna. In 1883, he moved to Berlin, where he opened a book shop of his own in 1887.

It was during his time in Berlin that his political and social ideas began to be influenced by socialism. At the age of 27, he read a newspaper report about a peace society that had been formed by Baroness Bertha von Suttner in Vienna. He immediately wrote to the baroness proposing a peace journal that he would publish if she agreed to be the editor. The 48 year old baroness was impressed with his boldness and enthusiasm and agreed to be editor.[2]

In 1892, the monthly journal titled Die Waffen Nieder! (Lay Down Your Arms!) made its debut. Fried used the title of the baroness' 1889 novel and she served as its editor until 1899. Fried and Baroness von Suttner remained friends for more than 20 years and he was at her beside when she died in 1914. The same year they started the journal they also collaborated on founding the German Peace Society.

Fried would eventually withdraw from the Society and returned to Vienna in 1903. When the baroness left the position of editor of Die Waffen Nieder! in 1899, Fried started the Die Friedenswarte (The Peace Watch), which he edited until his death.

Back in Vienna he became a prolific writer of newspaper articles on the cause for peace and began writing books. His two volume Handbuch der Friedensbewegung (Handbook of the Peace Movement) was the most comprehensive and authoritative work on peace issues prior to 1914.

As well as his prolific writing and publishing activities in the cause of peace, Fried was an efficient organizer. He was a member of the Berne Peace Bureau, secretary of International Conciliation for Central Europe and secretary general of the Union Internationale de la Presse pour la Paix.[3]

In his peace theory Fried moved beyond the ethical appeal of earlier pacifists. In the early days of his cooperation with baroness von Suttner he wrote her about the value of a scholarly treatise on peace by a Dresden jurist. He told her that this treatise represented the "North," and that "while you gracious lady, with your style of attack, represents the South. Heart and Intellect, as if one or the other could work alone."[4]

According to Fried it was wrong to emphasize disarmament because war and armaments were just symptoms of the the existing state in international anarchy. He believed that once there were organizations dedicated to relations between states then disarmament would follow naturally.

He was one of the fathers of the idea of a modern organization to assure world-wide peace. In another of his journals entitled Annuaire de la Vie Internationale he cited the evidence of the creation of the Pan-American Union and the Hague Conferences as evidence that history was progressing towards international bonds of cooperation. He recommended that the Pan-American Union serve as a model for Europe to move towards unification through the dissemination of cultural and economic developments.[4]

In the Pan-American movement he perceived a model for the preservation of national identity within international organizations. In keeping with this position, Fried defended Germany before World War I by chronicling Kaiser Wilhelm II's positive attitude toward world peace and during the war he refuted what he considered to be unreasonable criticism of Germany in the French, British, and American media.

Fried called his approach to Pacifism "scientific" and "revolutionary." Taking his cue from Karl Marx's socialist theory, he believed the laws of development would inevitably bring about the new international order. According to Fried it was the task of peace advocates to help their contemporaries to become aware of where history was moving and to help facilitate that movement by removing obstacles standing in the way of peace.[4]

International recognition for his ideas came in 1911 when he received the Nobel Peace Prize. That same year, he received a grant from the Carnegie Endowment for International Peace that enabled him to begin distributing 10,000 copies of his Die Friedenswarte.

In 1913, he received an honorary doctor's degree from Leiden University in The Netherlands and in 1914, he was given charge of arrangements for the Universal Peace Conference to be held in Vienna in September 1914. The conference was going to pay homage to the recently deceased baroness von Suttner in her home city.[4] The conference never took place as World War I broke out in August of 1914. Fried was charged with high treason and had to escape to Switzerland, where he continued publishing his peace philosophy.

The war over, Fried published Mein Kriegstagebuch (My War Journal), a diary which he kept during the war years to record his sentiments and the activities that he and his colleagues in the peace movement engaged in. In the journal he expressed dissatisfaction with the peace settlement and organized a journalistic campaign against the Treaty of Versailles. He tirelessly pressed the point in his propaganda for peace that the war was proof of the validity of his pacifistic analysis of world politics.[5]

Fried was also a prominent member of the Esperanto movement. The movement formulated the idea of creating a universal second language called Esperanto. The movement promoted the idea that a unified language would aid in the appreciation of all cultures and thus move the world toward peace.[6]

In 1903, he published the book Lehrbuch der internationalen Hilfssprache Esperanto (Textbook of the International Language of Esperanto).

After the war, his Austrian government bonds became worthless and he found himself impoverished and malnourished. He died in poverty of a lung infection in Vienna at the age of fifty-seven.

Fried's The Peace Watch is the magazine with the longest history in German-speaking regions in matters of peacekeeping and international organization. Since 1996, The Peace Watch has been published by the Berliner Wissenschafts-Verlag (Berlin University Press).[7]

Retrieved from https://www.newworldencyclopedia.org/p/index.php?title=Alfred_Hermann_Fried&oldid=1094402
Categories:
Hidden category:
This page was last edited on 9 January 2023, at 00:32.
Content is available under Creative Commons Attribution/Share-Alike License; additional terms may apply. See Terms of Use for details.