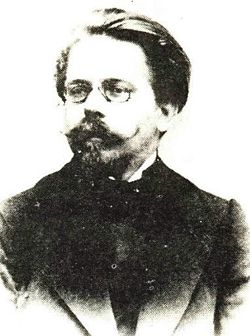 Władysław Stanisław Reymont (May 7, 1867 – December 5, 1925), born Stanisław Władysław Rejment, was a Polish author. He won the Nobel Prize for Literature in 1924. Reymont was the author of novels such as the ironic The Promised Land and The Outrage. An ironic and pessimistic vision of modern society runs throughout these works, the latter of which was a precursor to George Orwell's Animal Farm. The former is a pessimistic account of the industrial revolution's impact on modern society.

Reymont's baptism certificate lists his original surname as "Rejment." He "ordered" the change himself during his published debut, as it was supposed to protect him in the Russian-occupied area of Poland from any trouble for having published in Galicia a work not allowed under the Tsar's censorship. Kazimierz Wyka, an enthusiast of Reymont's work, believes that the correction could also have been meant to remove any association with the word rejmentować—which in some local Polish dialects means "to swear."

He was born in the village of Kobiele Wielkie, near Radomsko as one of nine children of Józef Rejment, an organist. He spent his childhood in Tuszyn near Łódź, to which his father had moved in order to work in a richer church parish. Reymont was defiantly stubborn; after a few years of education in the local school he was sent by his father to Warsaw into the care of his eldest sister and her husband to teach him his vocation. In 1885, after passing his examinations and presenting "a tail-coat, well-made," he was given the title of journeyman tailor—his only formal certificate of his education.

To his family's annoyance, he did not work a single day as a tailor. Instead he first ran away to work in a traveling provincial theater and then returned in the summer to Warsaw for the "garden theaters." Without a penny to his name he then returned to Tuszyn after a year and, thanks to his father's connections, took up employment as a gateman at a railway crossing near Koluszki for 16 rubles a month. He escaped twice more: in 1888 to Paris and London as a medium with a German spiritualist, and then again to a theater troupe. After his lack of success (he was not a talented actor), he returned home again. Reymont also stayed for a time in Krosnowa near Lipce and for a time considered joining the Pauline Order in Częstochowa.

When his Korespondencje ("Correspondence") from Rogowo, Koluszki and Skierniewice was accepted for publication by Głos ("The Voice") in Warsaw in 1892, he returned to Warsaw once more, clutching a group of unpublished short stories, along with a few rubles in his pocket. Reymont then visited the editorial offices of various newspapers and magazines and met writers who became interested in his talent. On a Mr. Świętochowski's advice, he went on a pilgrimage to Częstochowa in 1894 and wrote a report on his experience there. The report remains a classic example of travel writing. 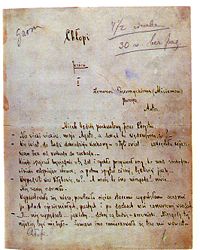 Rejmont proceeded to send his short stories to different magazines, and, encouraged by good criticism, decided to write novels: Komediantka ("The Deceiver") (1895) and Fermenty ("Ferments") (1896). No longer poor, he would soon satisfy his passion for travel, visiting Berlin, London, Paris, Italy. Then, he spent a few months in Łódź collecting material for a new novel ordered by the Kurier Codzienny ("The Daily Courier") from Warsaw. The earnings from this book—Ziemia obiecana ("The Promised Land") (1897)—enabled him to go on his next trip to France where he socialized with other exiled Poles (including Jan Lorentowicz, Stefan Żeromski, Przybyszewski, and Rydel). His earnings did not allow for that kind of life of travel. However, in 1900 he was awarded 40,000 rubles in compensation from the Warsaw-Vienna Railway after an accident in which Reymont as a passenger was severely injured. During the treatment he was looked after by Aurelia Szacnajder Szabłowska, whom he married in 1902, having first paid for the annulment of her earlier marriage. Thanks to her discipline, he restrained his travel-mania somewhat, but never gave up either his stays in France (where he partly wrote Chłopi between 1901 and 1908) or in Zakopane. Rejmont also journeyed to the USA in 1919 at the (Polish) government's expense. Despite his ambitions to become a landowner, including an unsuccessful attempt to manage an estate bought in 1912 near Sieradz, the life of the land was not for him. He would later buy Kołaczkowo near Poznań in 1920, but still spent his winters in Warsaw or France.

In November 1924 he was awarded the Nobel Prize for Literature over rivals Thomas Mann, Maxim Gorky and Thomas Hardy. Public opinion in Poland supported the Nobel for Stefan Żeromski, but the prize went to the author of Chłopi. Żeromski, considered a better candidate, was reportedly refused for his allegedly anti-German sentiments. However, Reymont could not take part in the award ceremony in Sweden due to a heart illness. The award and the check for 116,718 Swedish kroner were sent to Reymont in France, where he was being treated.

In 1925, somewhat recovered, he went to a farmers' meeting in Wierzchosławice near Kraków, where Wincenty Witos welcomed him as a member of PSL "Piast" (the Polish Peasant Party) and praised his writing skills. Soon after that event, Reymont's health deteriorated. He died in Warsaw in December of 1925 and was buried in the Powązki Cemetery. The urn holding his heart was laid in a pillar of the Holy Cross Church in Warsaw.

Reymont's literary output includes about 30 extensive volumes of prose. There are works of reportage: Pielgrzymka do Jasnej Góry ("Pilgrimage to Jasna Góra") (1894), Z ziemi chełmskiej ("From the Chełm Lands") (1910; about the persecutions of the Uniates), Z konstytucyjnych dni ("From the Days of the Constitution") (about the revolution of 1905) and some sketches from the collection Za frontem ("Beyond the Front") (1919). There are numerous short stories on life in the theatre, village life or work on the railway: Śmierć ("Death") (1893), Suka ("Bitch") (1894), Przy robocie ("At Work") and W porębie ("In the Clearing") (1895), Tomek Baran (1897), Sprawiedliwie ("Justly") (1899) and a sketch for a novel Marzyciel ("Dreamer") (1908). Then there are the novels: Komediantka, Fermenty, Ziemia obiecana, Chłopi, Wampir ("The Vampire") (1911), which was skeptically received by the critics, and a trilogy written in the years 1911 - 1917: Rok 1794 ("1794") (Ostatni Sejm Rzeczypospolitej, Nil desperandum and Insurekcja) ("The Last Parliament of the Commonwealth," "Nil desperandum" and "Insurrection").

The critics admit a certain number of similarities between Reymont and the Naturalists, but they stress that it was not a "borrowed" Naturalism, rather a record of life as experienced by the writer himself. Moreover, Reymont never formulated any aesthetics of his writing. In that, he was similar to other autodidacts, such as Mikołaj Rej or Aleksander Fredro. With little higher education and not able to read any foreign language, Reymont realized that his knowledge of grounded reality was his strong point, not literary theory.

His novel Komendiantka paints the picture of the drama of a rebellious girl from the provinces who joins a travelling theater troupe and finds, instead of asylum from the lies of her own surroundings, a nest of intrigues and sham. In Fermenty, a sequel to Komediantka, the heroine, rescued after an unsuccessful attempt to kill herself, returns to her family and accepts the burden of existence. Aware of the fact that dreams and ideas do not come true, she marries a nouveau riche who is in love with her. Ziemia Obiecana (The Promised Land), possibly Reymont's best known novel, is a social panorama of the city of Łódź during the industrial revolution, full of drastic detail, presented as an arena of the struggle for survival. In the novel, the city destroys those who accept the rules of the "rat race," as well as those who do not. The moral gangrene affects equally the three main characters—a German, a Jew, and a Pole. This dark vision of cynicism, illustrating the bestial qualities of men and the law of the jungle, where ethics, noble ideas and holy feelings turn against those who believe in them, are, as the author intended, at the same time a denunciation of industrialization and urbanization.

Ziemia Obiecana has been translated into 15 languages and two film adaptations; one directed in 1927 by A.Węgierski and A. Hertz and the other in 1975 by Andrzej Wajda.

In Chłopi, Reymont created a more complete and suggestive picture of country life than any other Polish writer. The novel impresses the reader with its authenticity of the material reality, customs, behavior and spiritual culture of the people. It is even more authentic in that it is written in the local dialect. Not only did Reymont use dialect in dialogues but also in narration, creating a kind of a universal language of Polish peasants. Thanks to this, he presents the colorful reality of the "spoken" culture of the people better than any other author. He set the action of the novel in Lipce, a real village which he came to know during his work on the railway near Skierniewice, and restricted the time of events to ten months in the unspecified "now" of the nineteenth century. It is not history that determines the rhythm of country life, but the "unspecified time" of eternal returns. The composition of the novel astonishes the reader with its strict simplicity and functionality. What is easier than writing a novel about village life, restricting its plot to one year and one place? The titles of the various volumes signal a tetralogy in one vegetational cycle, which regulates the eternal and repeatable rhythm of village life. Parallel to that rhythm is a calendar of religion and customs, also repeatable. In such boundaries Reymont placed a colorful country community with sharply drawn individual portraits. The repertoire of human experience and the richness of spiritual life, which can be compared with the repertoire of Biblical books and Greek myths, has no doctrinal ideas or didactic exemplifications. The author of Chłopi does not believe in doctrines, but rather in his own knowledge of life, the mentality of the people described, and his sense of reality. It is easy to point to moments of Naturalism (e.g. some erotic elements) or to illustrative motives characteristic of Symbolism. It is equally easy to prove the Realistic values of the novel. None of the "isms" however, would be enough to describe it. The novel was filmed twice (directed by E. Modzelewski in 1922 and by J. Rybkowski in 1973) and has been translated into at least 27 languages.

Reymont's last book, Bunt (The Outrage), first serialized in 1922 and then published as a book in 1924, describes a revolution of animals that takes over their farm to introduce "equality." The revolution quickly devolves into abuse and bloody terror. The story was an obvious metaphor to the Bolshevik Russian Revolution of 1917, and was banned in 1945-1989 Communist Poland, along with George Orwell's Animal Farm. It is unknown if Orwell knew of Bunt. The novel was recently reprinted in 2004.

Retrieved from https://www.newworldencyclopedia.org/p/index.php?title=Wladyslaw_Stanislaw_Reymont&oldid=1043665
Categories:
Hidden category:
This page was last edited on 10 October 2020, at 16:05.
Content is available under Creative Commons Attribution/Share-Alike License; additional terms may apply. See Terms of Use for details.