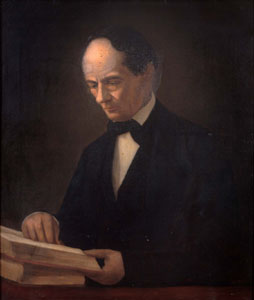 William Holmes McGuffey (September 23, 1800 – May 4, 1873) was an American educator who created the McGuffey Readers, one of America's first textbook sets. During the nineteenth century, the finished works of McGuffey represented far more than a group of textbooks; they helped frame the country's morals and tastes, and shaped the American character. The lessons in the McGuffey Readers encouraged standards of morality and society throughout the United States for more than a century. The McGuffey Readers reflect their author's personal philosophies, as well as his rough and tumble early years as a frontier schoolteacher.

William Holmes McGuffey was born in Washington County, Pennsylvania on September 23, 1800. The McGuffey family had immigrated to America from Scotland in 1774, and brought with them strong opinions on religion and a belief in the value of education. In 1802, the family moved to Tuscarawas County, Ohio. Young William learned to read and write from his mother and studied Latin from a clergyman in nearby Youngstown, Ohio. He also learned Hebrew and Greek.

Educating the young mind and preaching the gospel were McGuffey's passions. He had a remarkable ability to memorize, and could commit to memory entire books of the Bible. McGuffey became a "roving" teacher at the age of 14, beginning with 48 students in a one room school in Calcutta, Ohio. The size of the class was just one of several challenges faced by the young McGuffey. In many one-teacher schools, children's ages varied from six to twenty-one. McGuffey often worked eleven hours a day, six days a week in a succession of frontier schools, primarily in the State of Kentucky. Students brought their own books, most frequently the Bible, since few textbooks existed.

Between teaching jobs, William McGuffey received an excellent classical education. He went to the Old Stone Academy in Darlington, Pennsylvania, for one year in 1818 and went on to Washington College and graduated with honors in 1826. That same year he was appointed to a position as professor of Languages at Miami University in Oxford, Ohio.

In 1827, McGuffey married Harriet Spinning, and the couple eventually had five children. Very little is known about the early lives of these children, although one daughter's diary reveals that perfect obedience and submission were expected. William McGuffey spent his life striving to instill his strong convictions in the next generation. He believed religion and education to be interrelated and essential to a healthy society. In 1829, he was ordained at Bethel Chapel as a minister in the Presbyterian Church.

While McGuffey was teaching at Miami University, he established a reputation as a lecturer on moral and biblical subjects. In 1835, the small Cincinnati publishing firm of Truman and Smith asked McGuffey to create a series of four graded Readers for primary level students. McGuffey was recommended for the job by Harriet Beecher Stowe, a longtime friend. He completed the first two Readers within a year of signing his contract, receiving a fee of $1,000. While McGuffey compiled the first four Readers (1836-1837 edition), the fifth and sixth were created by his brother Alexander. The fifth was published in 1944 and the sixth was not published until 1957. The series consisted of stories, poems, essays, and speeches. The advanced Readers contained excerpts from the works of great writers such as John Milton, Daniel Webster, and Lord Byron. Pioneer families, who did not have many books, appreciated the readers. McGuffey's books eventually became the standard textbooks in 37 states and helped influence the literary tastes of nineteenth-century America.

In 1845, McGuffey moved to Charlottesville, Virginia where he became professor of Philosophy at the University of Virginia. Although famous as the author of the Readers, McGuffey wrote very few other works. He was athletic, loved children, had a sparkling sense of humor, and enjoyed a good joke. He was very fond of teaching and children as he geared the books toward a younger audience. Through the hard times of the Civil War and following, McGuffey was known for his philanthropy and generosity among the poor and African Americans.

Two of the best known school books in the history of American education were the eighteenth century New England Primer[1] and the nineteenth century McGuffey Readers.[2] Of the two, McGuffey's was more popular and widely used. It is estimated that at least 120 million copies of McGuffey's Readers were sold between 1836 and 1960, placing its sales in a category with the Bible and Webster's Dictionary. Since 1961 they have continued to sell at a rate of some 30,000 copies a year. McGuffey's Readers are still in use today in some school systems, and by parents for homeschooling purposes.

The McGuffey Readers dealt with the natural curiosity of children; emphasized work and an independent spirit; encouraged an allegiance to country, and an understanding of the importance of religious values. The Readers were filled with stories of strength, character, goodness and truth. The books presented a variety of contrasting viewpoints on many issues and topics, and drew moral conclusions about lying, stealing, cheating, poverty, teasing, alcohol, overeating, skipping school, and foul language. The books taught children to seek an education and to continue to learn throughout their lives.

McGuffey's Readers were among the first textbooks in America that were designed to become progressively more challenging with each volume. They used word repetition in the text as a learning tool, which built strong reading skills through challenging reading. Sounding-out, enunciation and accents were emphasized. Colonial-era texts had offered dull lists of 20 to 100 new words per page for memorization. In contrast, McGuffey used new vocabulary words in the context of real literature, gradually introducing new words and carefully repeating the old.

Even though there were originally four Readers, most schools of the nineteenth century used only the first two. The first Reader taught reading by using the phonics method, the identification of letters and their arrangement into words, aided with slate work. The second Reader came into play once the student could read, and helped them to understand the meaning of sentences while providing vivid stories which children could remember. The third Reader taught the definitions of words, and was written at a level equivalent to the modern 5th or 6th grade. The fourth Reader was written for the highest levels of ability on the grammar school level, which students completed with this book.

McGuffey believed that teachers should study the lessons as well as their students, and suggested they read aloud to their classes. He also listed questions after each story, for he believed in order for a teacher to give instruction they must ask questions. McGuffey desired to improve students' spelling, sharpen their vocabulary and redevelop the lost art of public speaking. In the nineteenth century, elocution was a part of every public occasion, and McGuffey was responsible for creating a generation of gifted orators and readers.

McGuffey was remembered as a theological and conservative teacher. He understood the goals of public schooling in terms of moral and spiritual education, and attempted to give schools a curriculum that would instill Presbyterian Calvinist beliefs and manners in their students. These goals were suitable for the early nineteenth century American Republic, but not for the later trend towards nationhood and unified pluralism.

McGuffey is credited with the following quote:

The Christian religion is the religion of our country. From it are derived our notions on character of God, on the great moral Governor of the universe. On its doctrines are founded the peculiarities of our free institutions. From no source has the author drawn more conspicuously than from the sacred Scriptures. From all these extracts from the Bible I make no apology.

Critics of McGuffey's Readers cite derogatory references to ethnic and religious minorities. For example, Native Americans are referred to as "savages." Critics regard the references in the book to the Jews and Judaism as anti-semitic. For instance, in the first chapter of Neil Baldwin's Henry Ford and the Jews, which is entitled "McGuffeyland," the author makes the case that Henry Ford's self-avowed anti-semitism originated with his study of McGuffey's Readers as a schoolboy. Baldwin cites numerous anti-semitic references to Shylock, and to Jews attacking Jesus and Paul. Ford claimed as an adult to be able to quote from the Readers from memory at great length.[3]

The content of the Readers changed drastically between McGuffey's 1836-1837 edition and the 1879 edition. The revised Readers were compiled to meet the needs of national unity and the dream of an American "melting pot" for the worlds' oppressed masses. The Calvinist values of salvation, righteousness, and piety, so prominent in the early Readers, were entirely missing in the later versions. The content of the books was secularized and replaced by middle-class civil religion, morality, and values. McGuffey's name was continued on these revised editions, yet he neither contributed to them nor approved their content.[4]

Other types of schoolbooks eventually replaced McGuffey's. The desire for distinct grade levels, a changing society which sought less moral and spiritual content in their schoolbooks, and publishers who realized that there was greater profit in consumable workbooks, helped to bring about their decline. McGuffey's lively texts never entirely disappeared, however, and are once again enticing children to learn and become avid readers. Schools use them frequently today to strengthen reading skills and cultivate a sense of history in young students.

McGuffey Readers played an important role in American history. Most prominent post-Civil War and turn-of-the-century American figures credited their initial success in learning to the Readers, which provided a guide to what was occurring in the public school movement and in American culture during the nineteenth century. The mind and spirit of William Holmes McGuffey were most fully expressed through his readers and the moral and cultural influence they exerted upon children. The success of McGuffey's vision is evidenced by the fact that the reprinted versions of his Readers are still in print, and may be purchased in bookstores across the country.

William McGuffey died in 1873, a success as an educator, lecturer, and author. McGuffey is buried at university burial ground, in Charlottesville, Virginia. The School of Education at Miami University is named for him and his home in Oxford is a National Historic Landmark offering tours on weekdays.[5]