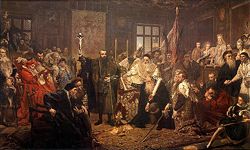 The Union of Lublin. Painting by Jan Matejko.

The Union of Lublin (Lithuanian: Liublino unija;Polish: Unia lubelska) was a political act, signed July 1, 1569, in Lublin, Poland, which united the Kingdom of Poland and the Grand Duchy of Lithuania into a single state, the Polish-Lithuanian Commonwealth. The Commonwealth was ruled by a single elected monarch who carried on the duties of Polish King and Grand Duke of Lithuania, and governed with a common Senate and parliament (the Sejm). The Union was an evolutionary stage in the Polish-Lithuanian alliance and personal union, necessitated by Lithuania's dangerous position in wars with Russia. By creating the largest state in Europe, Lithuania could hope to defend itself against its much more powerful neighbor.

Constituting a crucial event in the history of several nations, the Union of Lublin has been viewed quite differently by many historians. Polish historians concentrate on its positive aspect, emphasizing its peaceful, voluntary creation and its role in the spreading of advanced Polish culture. Lithuanian historians are more critical of the union, pointing out that it was dominated by Poland. Russian and especially Belarussian and Ukrainian historians emphasize that notwithstanding its appeal to the nobility, the Commonwealth had nothing but oppression for its peasants (although the peasant situation in the Commonwealth was no worse than that of the peasants in Muscovy).[1] The voluntary nature of the Union is seen by some as a precedent for the emergence of the European Union. However, whereas the EU has a sophisticated political infrastructure which carefully protects the interests of each member state, the political system of the Union of Lublin was never properly constituted, which represented one of its main weaknesses and failures. While EU member states have to work in collaboration with others in order to carry out an initiative, Poland's de facto dominance over Lithuania created resentment. 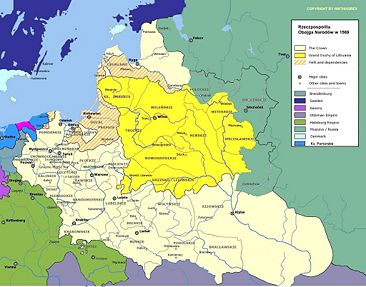 There were long discussions before signing the treaty, as Lithuanian magnates were afraid of losing much of their powers, since the union would make their status equal in the eyes of law with that of the much more numerous lower nobility. However Lithuania faced the threat of total defeat in the Livonian war against Russia and incorporation into Muscovite Russia, and Polish nobility was reluctant to offer help to Lithuania without receiving anything in exchange. In addition to the Polish nobility (the szlachta), Zygmunt II August, King of Poland and Grand Duke of Lithuania also pressed for the union.

Sejm met in January 1567 near the Polish town of Lublin, and had not reached an agreement. In protest to heavy enforcement to sign the Act by Poles, Lithuanians under leadership of Vilnius voivod Mikołaj "Rudy" Radziwiłł left Lublin on March 1, fearing that Zygmunt II August would make decision on his own.

After that, on March 26, King was forced by szlachta to incorporate southern Lithuanian-controlled lands of Podlachia, Volhynia, Podolia and the Kiev regions into the Crown of Poland. These historic lands of Rus' make up more than half of modern day Ukraine, and were at that time a significant part of Lithuanian territory whose upper class was significantly Ruthenized at that time. All loyal nobles were forcedly sworn to King of Poland, and those who refused had their lands confiscated.

Lithuanians were forced to come back under the leadership of Jan Chodkiewicz, (father of Jan Karol Chodkiewicz) and continued negotiations using slightly different tactics than Mikołaj "the Red" Radziwiłł. Although Polish szlachta wanted full incorporation of GDL into the Crown, Lithuanians continued to oppose, and agreed only on status of federal state. On June 28, 1569, the last objections were overcome, and the act was signed by the king on July 4.

Poland provided military aid in that war after the union of the two entities, but did not return the previously annexed territories. Lithuania had to recognize incorporation of Podlachia, Volhynia, Podolia and the Kiev regions into Poland.

The Union of Lublin was Zygmunt's greatest achievement and greatest failure. Although it created the largest state in contemporary Europe that would endure for over 200 years, Zygmunt failed to push through the reforms that would create a workable political system. He hoped to strengthen the monarchy with the support of the lesser nobility, and balance the power of lesser nobility and magnates. However although all nobility in Commonwealth was in theory equal in terms of law, the magnates political power was not weakened significantly and in the end they could too often bribe or coerce their lesser brethren. In addition, the royal power would continue to wane, and while the neighboring states continued to evolve into strong, centralized absolute monarchies, the Commonwealth would slide with its Golden Liberty into a political anarchy that would eventually cost its very existence.

The Union of Lublin provided for merger of the two states, although they retained significant degrees of autonomy, each having their own army, treasury, laws and administrations. Although the countries were equal in theory, the larger and more culturally attractive Poland would became the dominant partner. Due to population differences, Polish deputies outnumbered Lithuanians in the Sejm by a three to one ratio.

Attempts to limit the power of Lithuanian magnates (especially the Sapiehas' family) and unify the laws of the Commonwealth led to the koekwacja praw movement, culminating in the koekwacja reforms of the election sejm of 1697 (May-June), confirmed in the general sejm of 1698 (April) in the document Porządek sądzenia spraw w Trybunale Wielkiego Księstwa Litewskego.[2]

After the Union, Lithuanian nobles had the same formal rights as Polish to rule the lands and subjects under their control. However, political advancement in the Catholic dominated Commonwealth, was a different matter.

In culture and social life, however, both the Polish language and Catholicism became dominant for the Ruthenian nobility, most of which were initially Ruthenian speaking and Eastern Orthodox by religion (see Polonization). However the commoners, especially peasants, who aggravated by a rapid inserfement as the Ruthenian territory was colonized by Szlachta, continued to speak in their own languages and the Orthodox religion, which eventually created a significant rift between the lower social classes of people and the nobility in the Lithuanian and Ruthenian areas of the Commonwealth. Some Ruthenian magnates resisted the attempted to resist Polonization (see e. g. Ostrogski) by adamantly adhering to the Orthodox Christianity, giving generously to the Ruthenian Orthodox Churches and to the Ruthenian schools. However, the pressure of Polonization was harder to resist with each subsequent generation and eventually almost all Ruthenian nobility was Polonized.

The Union of Lublin was superseded by the Constitution of the Third May from 1791, when the federative Commonwealth was to be transformed into a unitary state by King Stanisław August Poniatowski. However the constitution was not fully implemented.

The Cossack uprisings and foreign interventions lead to the partition of the Commonwealth by Russia, Prussia and Austria-Hungary in 1795. The Union of Lublin was also temporary not active while the Union of Kėdainiai was working.

The Union of Lublin created the largest state in Europe's history (if counting only states which are fully in Europe, not counting the Russian or Roman empires). The Union of Lublin can be said to have created a similar state to the present-day European Union, thus considering the Union (along with the Kalmar Union, the several Acts of Union in the British Isles and other similar treaties) to be kind of a predecessor of the Maastricht treaty. The former, however, created a state of countries more deeply linked than the present-day EU. It remains of interest to those who are concerned with the limitations of the nation state and with the possible benefits of different types of political organizations such as consociationalism, for example, that promotes inter-dependence and power-sharing and thus reduces rivalry and the type of self-interest that can result in tension and conflict.

Retrieved from https://www.newworldencyclopedia.org/p/index.php?title=Union_of_Lublin&oldid=683914
Category:
Hidden category:
This page was last edited on 2 April 2008, at 18:15.
Content is available under Creative Commons Attribution/Share-Alike License; additional terms may apply. See Terms of Use for details.