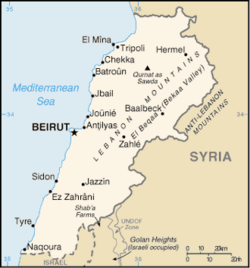 Map of Lebanon indicating borders with Syria and Israel.

The Taif Agreement was negotiated in Taif, Saudi Arabia by the surviving members of Lebanon's 1972 parliament—fathered by Parliament Speaker President Hussein El-Husseini. The agreement covered political reform, the ending of the Lebanese Civil War, the establishment of special relations between Lebanon and Syria, and a framework for the beginning of complete Syrian withdrawal from Lebanon. It was signed on October 22, 1989. While the Civil War in Lebanon involved relations between the various religious communities within the country, it was also part of the Arab-Israeli conflict. Unfortunately, external intervention in Lebanon's affairs did not end, as intended. Syria and Iran continue to fund various groups, while armed conflict again erupted between Lebanon and Israel towards the end of 2006. Syria is believed to be responsible for the assassination of the former Lebanese Prime Minister, Rafik Baha ad-Din Hariri. Subsequent to the Agreement, the country has made progress toward rebuilding its political institutions and regaining its national sovereignty. It has established a political system that gives Muslims a greater say in the political process. Critics, however, charge that the new arrangements institutionalize sectarian divisions in the government while no positive efforts to bring about genuine reconciliation have been officially implemented. While the Taif Agreement recognized and honored Lebanon's sovereignty and its non-aligned status within the Arab League, it also referred to a 'special relationship' with Syria. However, this relationship should be based on recognition of 'the sovereignty and independence of each of them'.

The background to the Taif Agreement consists of both the Lebanese Civil War and Israeli presence after 1982. The Civil War itself resulted from the breakdown of relations between the Lebanon's different communities, due in part to the influx of Palestinian refugees following the 1948-9 Arab-Israeli War and in particular the relocation there of the Palestine Liberation Organization leadership in 1971. The Civil War is usually dated from 1975. In addition to the demographic changes, plans to link parliamentary representation to the size of each community was perceived by Christians as a threat, since under the existing constitution they controlled the Presidency while the Prime Minister was always a Sunni Muslim. Initially, each community formed militia for self-defense. The small Lebanese army could not prevent the outbreak of hostilities and its members started to defect to their own communities' militia. Internal conflict spilled over into Israel as the PLO (Palestinian Liberation Organization) and Hezbollah raided Galilee. In retaliation, Israel invaded Lebanon in 1978 and in 1982 adding an external dimension to the war. The war was now both a civil and an international conflict. The 1982 Israeli invasion was called Operation Peace for Galilee. Hezbollah, a Shi'a political and religious party supported by Iran was formed in 1982. It opposes Israel's existence. Following United Nations intervention, most Israeli troops withdrew from Lebanon by June 1985 but the civil war between various communities continued until the Taif Agreement was ratified. Israeli did not fully withdraw until 2000. Syria entered the conflict in 1976 when the Lebanese Parliament asked for help to end the civil war between Christians, Druze, Sunni and Shi'a Lebanese that erupted in 1975, which also featured members of the PLO. The Taif Agreement aimed to both resolve the disputes between the protagonists through a power-sharing arrangement and to normalize relations between Lebanon, Israel and Syria. Neither aim has been wholly fulfilled. Syria remains an actor in Lebanese affairs while Hezbollah, which has a significant presence in the Lebanese Parliament and is a legal entity, continued to engage in anti-Israeli activities. The Taif Agreement was an initiative of the Arab League which aimed to reconcile the different parties and to establish peace. The committee appointed by the League was chaired by Kuwait. Saudi Arabia, Algeria and Morocco were among the committee's members. The name is derived from the location, in Saudi Arabia, where a meeting of Lebanese parliamentarians took place in October 1989. Those present agreed to engage in a process of national reconciliation involving a power-sharing arrangement. The Parliament would consist of equal numbers of Christian and Muslims while executive authority would still be exercised by a Christian president.

The agreement restructured the National Pact political system in Lebanon by transferring some of the power away from the Maronite Christian community, which had been given a privileged status in Lebanon under French colonial rule. Prior to Taif, the Sunni Muslim Prime Minister was appointed by and responsible to the Maronite President. After Taif the Prime Minister was responsible to the legislature, as in a traditional parliamentary system. At the time of the Taif negotiations, a Maronite Christian Prime Minister, General Michel Aoun, had controversially been appointed by President Amine Gemayel, contrary to the National Pact.

Although the Taif Agreement identified the abolition of political sectarianism as a national priority, it provided no timeframe for doing so. The Chamber of Deputies was increased in size to 128 members, shared equally between Christians and Muslims, rather than elected by universal suffrage that would have provided a Muslim majority (excluding the expatriate community of which a majority are Christian). A cabinet was established similarly divided equally between Christians and Muslims. Religious identity would no longer be included on official IDs.

The Agreement committed Lebanon "to achieve comprehensive social justice through fiscal, economic, and social reform' (Article G). All militia were to be disbanded (Hezbollah has not complied).

The agreement was ratified on November 4, 1989. Parliament met on the following day at Qoleiat air base in North Lebanon and elected President Rene Mouawad 409 days after Amine Gemayel vacated this position upon the expiration of his term in 1988. Mouawad was unable occupy the Presidential Palace which was still in use by General Michel Aoun. Mouawad was assassinated 17 days later in a car bombing in Beirut on November 22 as his motorcade returned from Lebanese independence day ceremonies. He was succeeded by Elias Hrawi, who remained in office until 1998.

On May 11, 2004, President of the United States George W. Bush signed an Executive Order implementing sanctions on Syria pursuant to the Syria Accountability and Lebanese Sovereignty Restoration Act of 2003. US sanctions against Syria were threatened, since (in part) "Syria maintains a military presence in Lebanon inconsistent with the spirit of the 1989 Taif Accords".[1]

After the Cedar Revolutions’ mass demonstrations calling for Syrian withdrawal from Lebanon in February 2005, the Syrian deputy foreign minister Waleed Al-Mualem said "the important withdrawals that have been carried out so far and will be carried out later will be done in agreement with Lebanon against the backdrop of the Taif Agreement and the mechanisms it entails." A White House spokesman emphasized UN Security Council Resolution 1559 in a February 25, press briefing.[2]

The agreement also provided for the disarmament of all national and non-national militias. All have disarmed apart from the Shiite Hezbollah and the non-Lebanese Fatah and Hamas, P.F.L.P.

In 1991, a Treaty of Co-operation was signed between Syria and Lebanon as required by the Taif Agreement. The treaty refers to the two nations' common destiny and common interests and called for social, economic, security, defense, scientific and cultural cooperation.

In July 2006, Israel again invaded Lebanon following the hostage-taking by Hezbollah of two Israeli soldiers for the purpose of exchanging these with Israeli held prisoners. As the conflict escalated, the Lebanese Cabinet agreed in an extraordinary session that Israel must withdraw and agree to a ceasefire in accord with the Taif Agreement and UN resolutions. However, Energy Minister Mohammad Fneish, a member of Hezbollah argued that the ongoing military crisis had surpassed the Taif Accord and UN Security Council Resolution 1559, so the accord is no longer a document of national agreement. Iran's significant role in the region should not be ignored, he added.[3]

The 2006 Israel-Lebanon conflict came to an end with a ceasefire under United Nations Security Council Resolution 1701. Paragraph three of this resolution specifies that the Security Council