Saint Alphonsa Muttathupadathu (Malayalam: അല്ഫോന്‍സാ മുട്ടത്തുപാടത്ത്; Alphonsa dell’Immacolata Concezione) (August 19, 1910–July 28, 1946) is a Catholic Saint, the second person of Indian origin to be canonized as a saint by the Roman Catholic Church, the first Indian woman canonized, and the first canonized saint of the Syro-Malabar Catholic Church, an Eastern Catholic Church. Alphonsamma, as she was locally known, had a poor and difficult childhood, experiencing early loss and suffering. She joined the Franciscan Clarist Congregation and, after completing her schooling, took her vows to the order in 1936. She taught school for years, plagued by illness throughout most her teaching career.

Claims of her intervention began almost immediately upon her death, and often involved the children in the convent school where she had taught. The case for Sister Alphonsa's canonization began on December 2, 1953 in the Syro-Malabar Catholic Diocese of Palai where she was declared a Servant of God. Pope John Paul II declared her Venerable on July 9, 1985, and her beatification at Kottayam on February 8, 1986. On Sunday, October 12, 2008, Pope Benedict XVI announced her canonization at a ceremony at St Peter's Square. Hundreds of miraculous cures are claimed by her intervention, many of them involving straightening of clubbed feet, possibly because of her having lived with deformed feet herself. Two of those cases were submitted to the Congregation for the Causes of Saints as proof of her miraculous intervention.

Born as Annakkutty (that is, "little Anna") in Kudamaloor, a village in Kottayam district, Kerala, India, to Joseph and Mary Muttathupadathu, she was baptized on August 27, 1910, at Saint Mary's Church in Kudamaloor under the patronage of Saint Anna.[1] Anna's mother died when she was young, her maternal aunt raising her. Anna's great-uncle, Father Joseph Muttathupadathu, educated by her. When three years old, Anna contracted eczema and suffered for over a year.[1]

In 1916, Anna started her schooling in Arpookara. She received First Communion on 27 November 1917. In 1918, she transferred to the school in Muttuchira. In 1923, Anna badly burned her feet when she fell into a pit of burning chaff. That accident left her permanently disabled. When it became possible, Anna joined the Franciscan Clarist Congregation.[2] She entered Poor Clares convent in Bharananganam on Pentecost 1927. She received the postulant's veil on August 2, 1928 and took the name Alphonsa. In May 1929, she entered the Malayalam High School at Vazhappally. Her foster mother died in 1930.

On May 19, 1930 she received her religious habit at Bharananganam. Three days later she resumed her studies at Changanacherry, while working as a temporary teacher at the school at Vakakkad. On August 11, 1931 she joined the novitiate. Anna took her permanent vows on August 12, 1936. Two days later she returned to Bharananganam from Changanacherry. She taught elementary school, but was often sick and unable to teach.[1]

In December 1936, she was reportedly cured from her ailments through the intervention of Blessed Kuriakose Elias Chavara. However, on June 14, 1939, she was struck with a severe attack of pneumonia, leaving her weakened. On October 18, 1940, a thief entered her room in the middle of the night. This traumatic event caused her to suffer amnesia and weakened her further.

Her health continued to deteriorate over a period of months. She received extreme unction on September 29, 1941. The next day she regained her mental clarity, though still weakened. Her health improved over the next few years until in July 1945, she developed a stomach problem that caused vomiting.[3] 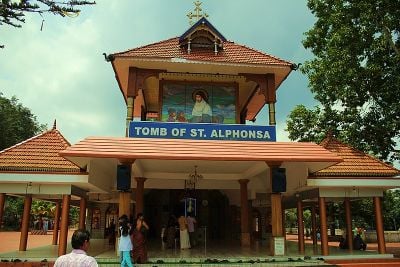 She died on July 28, 1946, aged 35. She is buried at Bharananganam, South India, in the Diocese of Palai. Her tomb in Bharananganam has become a pilgrimage site as miracles have been reported by the faithful. The miracle attributed to her intercession and approved by the Vatican for the canonization was the healing of the club foot of an infant in 1999.[4]

On December 2, 1953, Eugène-Gabriel-Gervais-Laurent Cardinal Tisserant inaugurated the diocesan process for her beatification. Pope John Paul II formally approved a miracle attributed to her intercession and Alphonsa was declared Servant of God on July 9, 1985. She was then known as Venerable Sister Alphonsa. She was beatified along with Kuriakose Elias Chavara at Kottayam.

During the Apostolic Pilgrimage to India of Pope John Paul II, the pope said as part of his speech at Nehru Stadium, Kottayamon February 8, 1986:

From early in her life, Sister Alphonsa experienced great suffering. With the passing of the years, the heavenly Father gave her an ever fuller share in the Passion of his beloved Son. We recall how she experienced not only physical pain of great intensity, but also the spiritual suffering of being misunderstood and misjudged by others. But she constantly accepted all her sufferings with serenity and trust in God, being firmly convinced that they would purify her motives, help her to overcome all selfishness, and unite her more closely with her beloved divine Spouse.

She wrote to her spiritual director: "Dear Father, as my good Lord Jesus loves me so very much, I sincerely desire to remain on this sick bed and suffer not only this, but anything else besides, even to the end of the world. I feel now that God has intended my life to be an oblation, a sacrifice of suffering" (20 November 1944). She came to love suffering because she loved the suffering Christ. She learned to love the Cross through her love of the crucified Lord.[5]

Did you know?
Alphonsa Muttathupadathu is the first woman of Indian origin to be canonized as a saint in the Roman Catholic church

Pope Benedict cleared Sister Alphonsa's name for canonization on June 1, 2007, a process begun fifty five years before. She was beatified by Pope John Paul II in 1986 in Kottayam, forty years after her death, in recognition of the numerous miracles associated with her. The continuing cures are chronicled in the magazine PassionFlower.[1]

The miracle attributed to her intercession and approved by the Vatican for the canonization was the healing of the club foot of an infant in 1999.[6]

The final ceremony for the canonization began on October 12, 2008 with the holy relics of Alphonsa being presented to the Pope by Sister Celia, Mother General of the Franciscan Clarist Congregation, the congregation to which Sister Alphonsa belonged.[1] Celia was accompanied by Vice Postulator Father Francis Vadakkel and former Kerala minister K. M. Mani, all holding lit candles. Speaking in English, the Pope declared Sister Alphonsa a saint, after reading excerpts from the Holy Bible. The Pope himself read out the biography of Alphonsa after the ceremony.[8]

In the homily, Pope Benedict recalled Saint Alphonsa's life as one of "extreme physical and spiritual suffering."

This exceptional woman … was convinced that her cross was the very means of reaching the heavenly banquet prepared for her by the Father. By accepting the invitation to the wedding feast, and by adorning herself with the garment of God's grace through prayer and penance, she conformed her life to Christ's and now delights in the 'rich fare and choice wines' of the heavenly kingdom. … (Her) heroic virtues of patience, fortitude and perseverance in the midst of deep suffering remind us that God always provides the strength we need to overcome every trial," the pope stated before the ceremony ended.[2]

Pope Benedict also called for an end to a recent deadly wave of anti-Christian violence: "I urge the perpetrators of violence to renounce these acts and join with their brothers and sisters to work together in building a civilisation of love"[9]

The ceremony was attended by around 25,000 people of Indian origin, many waving Indian flags, as well as a large delegation from India. A fifteen member official Indian delegation, led by Labor Minister Oscar Fernandes, attended the ceremony. Even as Sr. Alphonsa was raised to the realm of saints by the Vatican on Sunday, the Catholic Church in Kerala celebrated the canonization of the first Indian saint from an Indian Rite. Across the State, church bells tolled as Pope Benedict XVI named her St. Alphonsa of the Immaculate Conception.

The cemetery where the Franciscan Clarist nun was buried sixty two years ago at St Mary’s Forane Church at Bharananganam has now been turned into the chapel which houses her mortal remains. Fireworks and the toll of church bells greeted the canonization. St Mary’s Forane church at Kudmaloor, the parent parish of the saint, also celebrated a special Mass. Thousands converge on the small town of Bharananganam when they celebrate the feast of Saint Alphonsa from July 19-28 each year. Her tomb has become a pilgrimage site with miracles reported by devotees.