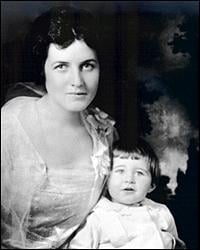 Rose Fitzgerald Kennedy (July 22, 1890 – January 22, 1995) married into the Kennedy family and together with her husband, Joe, formed a dynasty whose members helped shape American politics in the twentieth century. The Kennedys became America's equivalent of the "royal family."

Rose Kennedy raised children who sought to serve the greater purpose: President John F. Kennedy and Senator and Presidential candidate Robert F. Kennedy were her sons. Both of these public servants were assassinated very publicly, causing mourning throughout the world. She bore seven other children, two of whom died tragic deaths at the prime of their lives.

Through her difficulties she maintained her faith, never known to curse God or fate.

Rose Elizabeth Fitzgerald Kennedy was the matriach of "The Kennedy Clan," which was embedded in the American political culture of the last half of the twentieth century like no other family. Inventors of "Camelot," the Kennedys were perhaps the closest thing to a royal family that America has ever known. They arrived at such a station through ambition, wealth, and fierce family loyalty, coupled with exuberance and glamor, honorable service to the nation, and family tragedies impossible to keep private. No family has had such a powerful hold on the American imagination.

Three of their nine children would enter national politics, and one would become the youngest U.S. president to date, only to be assassinated in his first term. Another, a U.S. Attorney General, Senator, and Presidential candidate gunned down in the midst of his campaign. And a third, a Senator forced to withdraw from his Presidential bid following a murky scandal.

Mrs. Kennedy rarely talked publicly about her personal grief. But it is said she once she remarked to a friend: "Wasn't there a book about Michelangelo called The Agony and the Ecstasy? That's what my life has been."[1]

Rose Elizabeth Fitzgerald, born in the North End neighborhood of Boston, Massachusetts, was the eldest child of six born to John F. "Honey Fitz" Fitzgerald (a prominent figure in Boston politics who served one term as a member of Congress and later became the city's mayor), and his wife, Mary Josephine Hannon.

The family lived for a time at 39 Welles Avenue, in the Ashmont Hill section of Dorchester, Massachusetts, while she attended the local girl's Latin school. The Victorian, mansard-style home, largest on the street, later burned down. A marker is there, at Welles Avenue and Harley Street, naming it "Rose Fitzgerald Kennedy Square." The placement was celebrated by her son, Senator Edward M. Kennedy, in 1992, on Rose's 102nd birthday.

She attended the New England Conservatory in Boston, studying piano. From there, she went on to the Convent of the Sacred Heart in Boston, Manhattanville College of the Sacred Heart in Purchase, New York, and finally a Catholic finishing school in the Europe. Not content with society teas, Rose organized groups to discuss current affairs and taught catechism in Boston's slums.[2]

With her father, she toured Europe in 1908. They also visited the newly built Panama Canal.

Rose Fitzgerald married Joseph P. Kennedy, Sr. on October 7, 1914, after a courtship of more than seven years, and they lived at first in nearby Brookline, Massachusetts, in a house that is now a national historic landmark. In 1929, Joseph and Rose Kennedy bought the summer house they had been renting in Hyannis Port, Massachusetts. In time, their children established homes on adjacent properties. The houses and the Cape Cod locale would serve as the backdrop for Kennedy family gatherings over the years.

Kennedy's business ventures included banking, stock trading, producing movies and selling liquor. He got out of the stock market before the crash of 1929—after the major devaluation of everyone else's portfolios, his family was only more wealthy during the Great Depression of the 1930s.

"Was she a fool, I asked myself… or a saint? Or just a better actress than I was?" (Hollywood star Gloria Swanson on Rose Kennedy). Joseph Kennedy's affair with Swanson was widely known. In fact, it seemed there was no effort to hide his constant philandering. It could not have been easy, but Rose chose not to acknowledge it. Swanson recalled, "If she suspected me of having relations not quite proper with her husband, or resented me for it, she never once gave any indication of it." Rose's reaction to her situation was to focus on her religion while at the same time she is said to have distanced herself from her children.[3]

An intensely devout Roman Catholic, Rose prayed in her own private retreat at the family compound. Much of her personal time was spent in religious contemplation.

In 1938, President Franklin Roosevelt named Joseph Kennedy Ambassador to the Court of St. James's, and the family stayed in England until World War II broke out.

John F. Kennedy, Naval veteran, Congressman and then Senator, was elected President of the United States in 1960, and was assassinated in Dallas, Texas in 1963.

Rosemary Kennedy, the eldest daughter, diagnosed with mild retardation, underwent a medical procedure which promised to help her mood swings. The lobotomy was unsuccessful and she spent the remainder of her life in a Catholic convent. Due to her condition, the Kennedy family made significant contributions on behalf of the mentally handicapped.

Kathleen Kennedy worked for the American Red Cross in Britain, married William John Robert Cavendish, Marquess of Hartington, in 1944, and died in a plane crash in 1948.

Robert F. Kennedy, Attorney General of the United States and Senator from New York, ran for the office of U.S. President in 1968. He was a great contributor to the civil rights movement, supporter of the farmworkers, and a voice for the cause of justice. During his campaign, he was assassinated in Los Angeles, California.

Edward Moore Kennedy has served for many years as Senator from Massachusetts. His presidential aspirations were cut short due to what is commonly known simply as "Chappaquidick," a scandal in which a young political worker drowned in his car after leaving a party with him.

In 1984, at the age of 94, Rose Kennedy suffered a stroke, which left her confined to a wheelchair for the rest of her life.

Ironically, soon after John took the oath of office as president, Rose's husband Joe suffered a stroke, rendering him mute. For the final eight years of his life, all he could do was watch as his family celebrated triumph and endured tragedy. Two of their sons were assassinated while the nation watched. Joe Kennedy outlived four of his nine children. When he died in 1969, The New York Times estimated the value of his estate at half a billion dollars. President Kennedy had said of his father: He "held up standards for us, and he was very tough when we failed to meet those standards. The toughness was important."[4]

In contrast to her husband, Rose did not push her own ambitions on her children. Instead, she offered an example of religious and familial duty and personal stoicism. After the death of her son John, she nearly cried. Regaining her self-composure, she declared, "No one will ever feel sorry for me." Rose Fitzgerald Kennedy outlived four of her nine children.[5]

At her death from complications of pneumonia at the age of 104, on January 22, 1995, Rose Kennedy was the longest-lived Presidential relative in history. She was also the oldest resident of Barnstable, Massachusetts (population: 55,000), where she was residing at the time of her death. She was well-known for her philanthropic efforts, as well as leading the Grandparents' Parade at age 90, at the Special Olympics. Her life and work with the Special Olympics are documented in the Oscar-nominated short documentary, Rose Kennedy: A Life to Remember.

The "Kennedy Curse" refers to a series of unfortunate events that have happened to the Kennedy family. While these events could have happened to any family, some have referred to the continual misfortune of the family as a curse. The improbability of so many repeated instances of misfortune within one family, especially two high-profile political assassinations, has raised questions as to whether the curse results from sheer bad luck or from coordinated violence against the Kennedy family.

There are several theories regarding the origin of the "curse." In Ireland, folklore states that an ancestor must have destroyed a fairy dwelling, thereby cursing all future generations.

Critics of the Curse theory argue that given the sheer size of the family, the number of unfortunate events is not unusual. The "curse" may be seen less as a supernatural phenomenon than simply as an operation of the laws of probability. Moreover, while tragic events occur to a lesser or greater extent in all families, they make headline news when they involve a famous clan. It could also be argued that the Kennedys, owing to their relative wealth, have a lifestyle that is quite different from that of average persons—most people, for example, do not pilot or fly in private planes—and consequently, they are more often in greater physical danger.

Sadly, many of Joe and Rose Kennedy's grandchildren have died tragic deaths at young ages, as well.