Buddha Yodfa Chulaloke, or Phutthayotfa (1737 – 1802), posthumously titled Rama I the Great, was King of Siam (now called Thailand) from 1782 to 1809, and the founder of the Chakri dynasty which rules Thailand to this day. He did much to place Buddhism at the center of cultural and religious life, as well as repelling the Burmese threat to Thailand's independence (land of the free). In fact, he extended Thai rule throughout central Indochina. He is credited with the "reconstruction of the Thai State" and with recovering Thailand's "place and prestige in the area." [1]. By reviving the Buddhist influence in Thai society, he may have contributed to his heirs' ability to preserve Thailand's independence from colonial domination. Thailand is the only Indochinese nations not to have been colonized. By using diplomacy and negotiation, Rama's heirs avoided military confrontation and positioned their state as a buffer zone between the French and British empires, using trade as a bargaining tool.

The future king, whose birth name was Thong Duang was born on March 20, 1737, in Ayutthaya, the Thai capital since 1350. His father was a court official and a nobleman and an ethnic Mon. His mother was part-Chinese.[2] After receiving his education in a Buddhist temple, his father sent him to become a squire for king Uthumphon, and it was at this moment that he met his friend Tak Sin, who would become King Taksin, Rama's future predecessor. Ayutthaya fell to a Burmese invasion in 1767. The king fled, dying a few days later of starvation, to be succeeded by Taksin, who set up his capital at Thonburi. Rama rejoined the ranks of king Taksin's army under the name Chao Phraya Chakri. Chao Phraya Chakri was considered one of Taksin's most valuable generals.

While serving as Taksin's general, Rama conquered Vientiane in 1778-79, putting the country under vassalage, and removing its Emerald Buddha and Phra Bang to Thonburi. His subsequent campaigns extended Thai rule into Laos, Cambodia, and into the Northern part of the Malay peninsula. On April 4, 1782, Taksin was declared mad after a coup d'etat and was later executed. Rama was in Cambodia at the time. He quickly returned to Thonburi, where he was declared king on April 6, establishing the Chakri dynasty.

As King of Siam

He was crowned on April 6 as Rama I; the date is now Chakri Memorial Day, a public holiday in Thailand. His first act as king was to transfer the capital from Taksin's capital, Thonburi, to what became Bangkok, on the east bank of the Chao Phraya River. He began building in 1782. Bangkok became a major commercial center. Trade with China and Chinese merchants thrived. He set about reforming the administration. Rama I had discovered a Chinese merchant colony exactly where he wanted to build his new palace. He compensated them for the land, and they re-settled where Bangkok's China Town exists to this day. He strengthened the Buddhist monastic order, convening a Council in 1788, to decide which scriptures should be considered orthodox. He salvaged Buddhist texts lost in the chaos after the sacking of Ayutthaya by the Burmese in 1767. The legitimacy of any Thai ruler is linked with patronage of Buddhism. Rama I encouraged scholars and artists to settle in his new capital. In modern Thailand, Buddhist monks are allowed to travel without paying on buses and trains and have reserved seating areas in many stations and airport facilities.

As king, Rama I was a generous supporter of art and literature, commissioning and funding a Thai translation of the Hindu epic, the Ramayana. He may have partly translated with himself. He built his palace, the Wat Phra Kaew, to house the Emerald Buddha, a national treasure believed to have been made in India as early as 43 B.C.E., and created a new code of laws, the Book of Three Seals. He appointed the first Supreme Patriarch of Thai Buddhism. 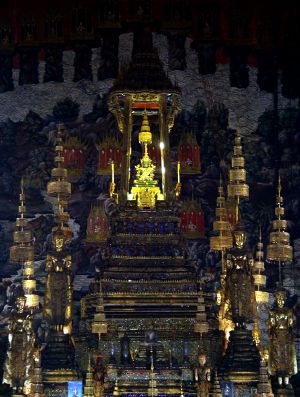 Rama I continued Taksin's task of saving the newly reunited country from attack by Burma, and repulsed several Burmese invasions. By the time of his death, not only had Burma been repulsed, but the entire central portion of Indochina was under Siamese rule. Statue of Rama I at the Phra Buddha Yodfa Memorial Bridge, Bangkok (1932)

On his death, he was succeeded by his son prince Isarasundorn, who assumed the throne name of King Buddha Loetla Nabhalai (now posthumously titled Rama II). He was given the name Buddha Yodfa Chulaloke posthumously, by king Rama III, Nangklao.

Rama's immediate successors, Rama II, III, and IV ,were faced with dealing with the European colonial powers. Unlike its neighbors, Thailaind remained free from colonial rule. Her Kings negotiated with both the British and the French, to whom they made territorial concessions (to the former in Mayaya, the latter in Cambodia) in return for an assurance from both powers that Thailand herself would remain a buffer-zone between their two empires. It could be said that Thailand exchanged her own Empire to become a nation-state. Rama I protected Thailand from subjection to another regional power, Burma. His heirs were not prepared to compromise Thai independence by allowing the great imperial powers to walk in and take over their state. Two aspects of Rama I's legacy contributed to their ability to retain freedom, against great odds. Firstly, Rama I positioned Buddhist values at the center of cultural life. Subsequently, these values became even more dominant, so much so that Thailand's own imperial ambitions within the region were abandoned in favor of developing a flourishing state with a rich culture and a successful economy. Buddhism's reverence for all sentient life tends to inform a preference for non-violence and for diplomatic, rather than military, resolution of disputes. Secondly, although only modest, Rama I did begin the process by which Thai's agriculture based economy started to diversify. In negotiating with the colonial powers, concessions for mining and logging (teak) were also made. The British in Singapore saw Siam as an "important link in the China trade," so wanted to secure trade treaties. By negotiating these trade-treaties, Siam avoided confrontation "at a time when the Western colonial powers were seizing territories left and right of it." The Chinese communities in Singapore and Bangkok became close trading partners. Rama I had allowed the Chinese traders to relocate just outside the walls of his new city.