Morarji Ranchhodji Desai (February 29, 1896 – April 10, 1995) was an Indian independence activist and the sixth Prime Minister of India from 1977-79. He was the first Indian Prime Minister who did not belong to the Indian National Congress. Before India's independence he served as Revenue Minister of Bombay (1937 to 1939 and in 1946. In 1952 he was elected Chief Minister. He entered central government in 1956, becoming Minister for Commerce and Industry (1956-1958) and Finance Minister (1958-1963). He contested Indira Gandhi for leadership of the Indian National Congress in 1966 but lost the following year and accepted the post of Deputy Prime Minister in her government. In 1969, he split from Gandhi and in 1977 formed the Janata Party. Winning the General Election that year, he became Prime Minister at the age of 81. He was a committed disciple of Mahatma Gandhi. He is the only Indian to receive the highest civilian awards from both India and Pakistan, the Bharat Ratna and the Nishaan-e-Pakistan. This award was given in recognition of his effort to improve India-Pakistan relations. He died at the age of 99.

His relatively brief term as Prime Minister proved to India that a party other than Congress could govern. He condemned Indira Gandhi's rule as dictatorial. He tried to re-position India as a non-aligned state, countering what he saw as too close a relationship with the Soviet Union by improving links with the United States, hosting a visit from Jimmy Carter in 1978. Visiting the Soviet Union in June 1979, he expressed India's opposition to the occupation of Afghanistan. He improved relations with China, frozen since a border dispute in 1962.[1] Desai's life was motivated to serve the public by what has been described as a "selfless mission." He tied to imbue government with "with spirituality and righteousness".[1]. Few Prime Ministers in the modern world have been as disinterested in material wealth or possessions as Desai was, whose simple life-style was legendary. 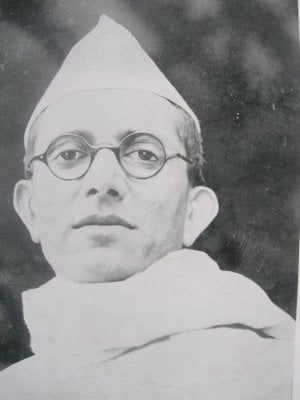 Morarji Desai in 1937, as Congress Home Minister of Bombay Presidency

Morarji Desai was born into an Anavil Brahmin family in Bhadeli, Valsad in Bombay Presidency (now in Gujarat). After graduating from Wilson College, Mumbai, he joined the civil service in Gujarat. Later, he left the service of the British in 1924 and joined the civil disobedience movement against British rule in India in 1930. He spent many years in jail during the freedom struggle (and owing to his sharp leadership skills and tough spirit, he became a favorite amongst freedom-fighters and an important leader of the Indian National Congress in Gujarat. When provincial elections were held in 1934 and 1937, Desai was elected and served as the Revenue Minister and Home Minister of the then Bombay Presidency.

Before the independence of India, he became Bombay's Home Minister and later was elected as Chief Minister of Bombay in 1952. The state was home to Marathi linguistic movements, with calls for the creation of a separate linguistic state. Considered as a tough leader, Desai was also known for pioneering beliefs and enforcing strict discipline and authority and thus possessed a radical mindset. By Desai's orders in 1960, a demonstration by the Samyukta Maharashtra Samiti was fired upon by the police resulting in the deaths of many demonstrators. 105 demonstrators were killed in the incident leading to public outrage that shook the central government. The incident led to the formation of the present State of Maharashtra.

As Home Minister, Desai outlawed any portrayals of indecency (which included "kissing" scenes) in films and theatrical productions. Although a staunch Gandhian, Desai was socially conservative, pro-business, and in favor of free enterprise reforms, as opposed to Prime Minister Jawaharlal Nehru's socialistic policies.

Rising in Congress leadership, Desai was at odds with Prime Minister Nehru and his allies, and with Nehru's age and health failing, he was considered as a possible contender for the position of Prime Minister. Outflanked in the leadership contest after Nehru's death in 1964 by the Nehruvian Lal Bahadur Shastri, Desai began to build support within the party.

After Shastri's death in 1966, he contested for Prime Minister and fought a closely-contested election with Indira Gandhi. Desai obtained 169 votes but lost to Indira Gandhi who garnered 351.

Initially Desai stayed out of the Cabinet, biding his time. As the young Indira Gandhi's government became embroiled in controversy following a poor harvest, currency devaluation, and rising disenchantment in the country, Desai's influence grew in strength and he returned to the Cabinet in 1967. He demanded the powerful position as the Minister for Home Affairs, but he settled for the Ministry for Finance, with the added title of Deputy Prime Minister. Relations between Desai and the young Prime Minister were strained at best.

When Prime Minister Indira Gandhi was convicted in June 1975 of wrongfully using government machinery for election work and corruption, Desai joined Jaya Prakash Narayan in organizing mass protests throughout the country calling for her resignation. In a show of intolerance towards any sort of opposition, Indira Gandhi declared Emergency and had all the opposition leaders including Desai arrested.

When Indira called for elections in January 1977, many opposition groups, including the Congress (O), joined with longtime rivals, regional parties and blocs of rival ideologies to form the Janata Party. He "campaigned on a platform of restoring human rights and freedom and appealing to popular outrage about forced sterilizations," and "inflicted the most crushing defeat for the Congress Party".[2] The Janata alliance won 356 seats, close to a two-thirds majority, and for the first time since independence, the dominance of the ruling Congress Party was broken. Morarji Desai finally came into office as the Prime Minister when Jaiprakash Narayan picked him as the man most likely to keep the coalition united.

At the time, he was 81 years old but still healthy and vigorous, without any particular ailments.

Desai led a fractious coalition government, and thus failed to achieve much owing to continuous in-wrangling and much controversy. Kulke describes him as an "experienced administrator" but as someone who was "not a good party leader." He was unable to "prevent the internal bickering" which led to his government's failure.[3] With no party in leadership of the coalition, rival groups vied to unseat Desai. Controversial trials of prominent Congress leaders, including Indira Gandhi over Emergency-era abuses worsened the fortunes of his administration. Desai worked to improve relations with neighbor and arch-rival Pakistan and restored normal relations with China, for the first time since the 1962 war. He communicated with Zia-ul-Haq and established friendly relations and diplomatic relations were also re-established with China. His government undid many amendments made to the constitution during emergency and made it difficult for any future government to impose national emergency. Among his ministers was another future non-Congress Prime Minister, Atal Behari Vajpayee (Minister for External Affairs) who later led his Bharatiya Janata Party to victory in 1996 and again in 1998.

Since India's first nuclear test in 1974 of which he has disapproved, Desai kept India's nuclear reactors stating "they will never be used for atomic bombs, and I will see to it if I can help it".[4] In 1977, the Carter administration sold India heavy water and uranium for its nuclear reactors but required American on-site inspection of nuclear materials. Desai declined, seeing the American stance as contradictory, in light of its own nuclear arsenal.[5]

Hosting a visit from Jimmy Carter in 1978, Desai was later accused of having links with the CIA. According to Sathasivam, Carter and Desai shared "humanist" rather than "realist" views of international relations, and struck up a "personal rapport with the new Indian Prime Minister."[6]

He favored prohibition and imposed this in several states.[7]

In 1979, Charan Singh withdrew from the Janata Party, forcing Desai to resign from office and retire from politics at the age of 83. Desai campaigned for Janata Party in the 1980 General Election as a senior politician but did not contest the election himself. Their defeat was partly due to food-crises. On the one hand, Janata had managed the economy well and "India's balance of payments showed a comfortable surplus." On the other, increase in agricultural exports to the rich Arab states actually backfired, causing a shortage of food in India itself.[8]

In retirement, he lived in Bombay, and died at the age of 99. He had been honored much in his last years a freedom-fighter of his generation.

Kanti Desai, Morarji Desai's son, was often criticized for being corrupt and using his father's name as an influence. During Desai's retirement, the family was evicted by a court order from their apartment in Mumbai occupied illegally. Sharad Pawar, then Chief Minister of Maharashtra, offered the family an apartment for the remainder of Morarji Desai's life, and the family moved there.

Morarji Desai was a strict follower of Mahatma Gandhi's principles.

Morarji Desai had described the Research and Analysis Wing (R&AW) as the praetorian guard of Indira Gandhi and had promised to stop all activities of the RAW after becoming prime minister. B. Raman, the former head of the Counter-Terrorism Division of India's external intelligence agency, the RAW reveals that, in an unguarded moment, Indian prime minister Morarji Desai indiscreetly told Pakistani dictator Zia ul-Haq that he was aware of Islamabad's nuclear schemes.

Morarji Desai practiced "auto urine therapy" (drinking one's own urine) to keep fit. In an interview, he stated that he was afflicted with piles in his 40s and was advised to try out drinking shivambu. (shiv=holy, ambu=water; in the therapy, urine is called 'shivambu'.) He felt benefits of the therapy within a week, and was soon completely cured. He continued the therapy for the rest of his life and argued for its curative effects on health.

Morarji Desai was a true Gandhian follower, social worker, institution builder and a great reformer. He was the Chancellor of Gujarat Vidyapith (university established by Mahatma Gandhi). Even during his term as the Prime Minister he used to visit and stay at Vidyapith during the month of October. He exemplified simplicity and used to write post card himself even when he held the office of Prime Minister. Sardar Patel deputed him to conduct meetings of farmers in Kaira district which finally led to establishment of AMUL Cooperative movement. During his rule, he withdrew intervention in Public Distribution System and rationing shops were literally lost due to cheap sugar and oil available in the market.

The Moraji Desai National Institute of Yoga in Delhi was named in his honor. He was renowned for his ascetic life-style (he ate nuts, fruit). He practiced Yoga every day.

He married Gajraben in 1911. They had five children.

His political legacy includes breaking the Congress's monopoly on government, improving relations with China and with the USA and especially with Pakistan. "His chief contribution," says Muzammiluddin "was that his Government enhanced popular faith in democracy."[9]