Margaret Beaufort, Mother of Henry VII, at prayer, by Rowland Lockey, about 1500.

Margaret Beaufort (May 31, 1443 – June 29, 1509) was the mother of King Henry VII of England, the grandmother of Henry VIII, and great-grandmother of Elizabeth I. She was a key figure in the Wars of the Roses.

Beaufort was a descendant of Edward III through John of Gaunt, Duke of Lancaster, and his third wife Katherine Swynford. She was betrothed at a young age to John de la Pole, but the marriage was never consummated. Her first husband was Edmund Tudor, the son of Katherine of Valois (widow of Henry V) and Owen Tudor, a Welsh squire. Edmund died in November 1456, but a few months later the 13-year-old Margaret Beaufort gave birth to his son, the future Henry VII.

As a wealthy heiress and young widow, Beaufort remarried shortly after Henry's birth. Leaving her son with his uncle Jasper Tudor in Wales, she went to England to marry Henry Stafford, the younger brother of the Duke of Buckingham. After Stafford's death, she married once again, this time to Thomas, Lord Stanley. She persuaded her husband to support her son's cause at the Battle of Bosworth Field, which ended in Henry's victory over the forces of Richard III.

During her son's reign, Beaufort built a fine estate at Collyweston and was the patron of educational and religious foundations. She died just a few months after Henry VII and is buried in a fine tomb in Westminster Abbey, near her son, his wife, and many of her descendants. 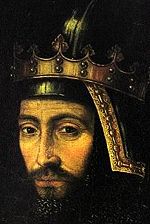 John of Gaunt, great-grandfather of Margaret of Beaufort.

Margaret Beaufort was the daughter of John Beaufort, 1st Duke of Somerset and Margaret Beauchamp of Bletso. She was also, through her father, a granddaughter of John Beaufort, 1st Earl of Somerset and a great-granddaughter of John of Gaunt, 1st Duke of Lancaster and his mistress Katherine Swynford. Following Gaunt's marriage to Katherine, their children (the Beauforts) were legitimized, but their descendants were barred from ever inheriting the throne, although in fact Edward IV and every monarch after him is descended from Gaunt and Swynford. Edward and his younger brother Richard III were sons of Cecily Neville, grandsons to Joan Beaufort, and great-grandsons to John of Gaunt and Katherine Swynford.

Beaufort's first marriage, to John de la Pole, took place in 1450, when she was still a child, but was annulled after a short time. Her second cousin Henry VI had as yet no children, and considered naming her his heir. Instead, he married her to his half-brother, Edmund Tudor, Earl of Richmond.

Edmund was the eldest son of the king's mother, dowager Queen Catherine (the widow of Henry V) by her second marriage to Owen Tudor. Thus, in one of the great ironies of history, Beaufort's son Henry—the Lancastrian claimant to the throne at the end of the Wars of the Roses who ultimately united the two houses by marrying the Yorkist princess Elizabeth of York—had plenty of royal blood but no legal claim to the throne. In fact, were it not for the Salic Law barring women from inheriting the French throne, he would have had a greater claim to the throne of France than to that of England. In addition, as Henry derived his claim to the throne from Beaufort, it is arguably she, and not her son, who should have claimed the crown, although she was content to let Henry reign instead of her.

Lady Margaret was 13 and pregnant when her husband Edmund died. The effect of Henry's birth on her 13-year-old body rendered her infertile for life. She was known for her education and her piety, and her son is said to have been devoted to her.

She married Thomas, Lord Stanley, some time between 1473 and 1482. Stanley had switched sides during the Wars of the Roses, due to Richard III holding his eldest son, Lord Strange, hostage. However, at the end of the Battle of Bosworth Field in 1485, it was Stanley who placed the crown on Henry VII's head. Stanley was later made Earl of Derby, which made Beaufort the Countess of Derby, but she was styled "The Countess of Richmond and Derby." 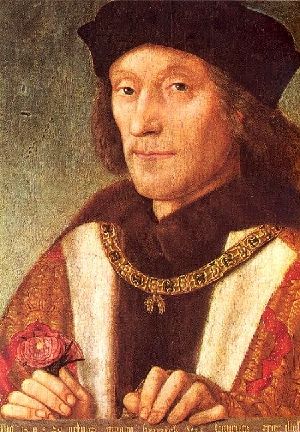 Beaufort was instrumental in the accession of her son Henry. She secretly conspired against Richard III with the Dowager Queen Consort, Elizabeth Woodville, whose sons, the Princes in the Tower, were presumed murdered by Richard. Once Henry returned from exile in France and won the crown from Richard at Bosworth Field, she was the mother of the reigning King but had never been Queen Consort, so she could not claim the title of Queen Mother. Instead she was referred to in court as My Lady the King's Mother. However, Beaufort was reluctant to accept a lower status than Elizabeth Woodville or even her daughter-in-law, Elizabeth of York, the present Queen Consort. She wore robes of the same quality as the Queen and only walked half a pace behind her; she sometimes signed herself Margaret R, signifying her regal status. Many historians believe the banishment of Woodville in 1487 by her husband Henry VII was partly at the behest of his influential mother. 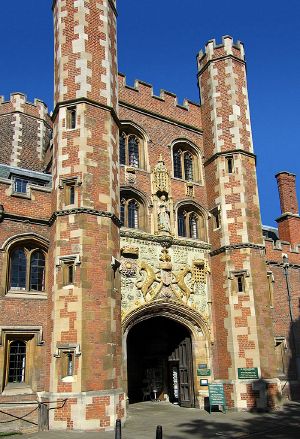 In 1497, Beaufort announced her intention to build a free school for the general public of Wimborne, Dorset. With her death in 1509, this wish came to pass and Wimborne Grammar School came into existence. The name of the school was later changed to the Free Grammar School of Queen Elizabeth, now known as Queen Elizabeth's School, the largest school in Dorset and one of the largest in the country.

In 1502 Beaufort established the Lady Margaret's Professorship of Divinity at the University of Cambridge.

Following the accession of Henry VII to the throne, she reestablished and enlarged God's House as Christ's College, Cambridge with a royal charter from the King. She has been honored ever since as the founder of the college. She also founded St John's College, Cambridge, where her portrait hangs in the great hall, and where the boat club is called Lady Margaret Boat Club (LMBC). Land that she owned around Great Bradley in Suffolk was bequeathed to St. John's College upon its foundation.

Beaufort died on June 29, 1509, in the Deanery of Westminster Abbey. She is buried in a black marble tomb topped with a bronze gilded effigy and canopy, between the graves of William and Mary and the tomb of Mary, Queen of Scots, in the Henry VII's Chapel in Westminster Abbey.

Beaufort's portrait (see top of page), at prayer in her richly furnished private closet behind her chamber, is a rare contemporary glimpse into a late Gothic aristocratic English interior. The severe black of her widow's weeds contrasts with the splendor of her private apartment, where every surface is patterned, even the floor alternating cream-colored and terracotta tiles. The plain desk at which she kneels is draped with a richly patterned textile that is so densely encrusted with embroidery that its corners stand away stiffly. Her lavishly illuminated Book of Hours is open before her, with its protective cloth wrapper (called a "chemise" binding) spread out around it. The walls are patterned with oak leaf designs, perhaps in lozenges, perhaps of stamped and part gilded leather. Against it hangs the dosser of her canopy of estate, with the tester above her head (the Tudor rose at its center) supported on cords from the ceiling. The coat-of-arms woven into the tapestry is of England (parted as usual with France) and the portcullis badge of the Beauforts, which the early Tudor kings would use. Small stained glass roundels in the leaded glass of her lancet windows also carry both England (cropped away here) and Beaufort. 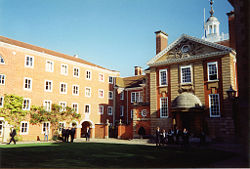 Beaufort was renowned for her piety and philanthropy. Of the several educational institutions she began, she is best known for founding Christ's and St. John's Colleges at Cambridge University. Lady Margaret Hall, the first women's college at the University of Oxford, was named in honor of Margaret Beaufort. She was also a patron of the printer/publishers William Caxton and Wynkyn de Worde. But she is best remembered for her devotion to her son, and outlived him by only two months.

Her descendants, Henry VIII and Elizabeth I, are two of England's most famous monarchs.

Retrieved from https://www.newworldencyclopedia.org/p/index.php?title=Margaret_Beaufort&oldid=1085948
Categories:
Hidden category:
This page was last edited on 6 November 2022, at 03:53.
Content is available under Creative Commons Attribution/Share-Alike License; additional terms may apply. See Terms of Use for details.