Mani (c.216–274 C.E.) was an Iranian religious prophet and preacher who founded Manichaeism, an ancient dualistic religion that was once prolific in Persia but is now extinct. Mani presented himself as a savior figure and his religious teachings were an eclectic blend of various traditions including Christianity, Zoroastrianism, and Buddhism, among others. He is identified by a fourth century Manichaean Coptic papyri as the Paraclete-Holy Ghost and is described among other titles as an apostle of Jesus Christ.

The teachings of Mani were once widely circulated in the ancient world, and their influence extended beyond Persia into the Roman Empire in the west, and India in the east. Neo-Manichaeism is a modern revivalist movement that is not directly connected to the ancient faith but is sympathetic to the teachings of Mani.

Until the late twentieth century, the life and philosophy of Mani were pieced together largely from remarks by his detractors. In 1969, however, a Greek parchment codex of c. 400 C.E., was discovered in Upper Egypt, which is now designated Codex Manichaicus Coloniensis (because it is conserved at the University of Cologne). It combines a hagiographic account of Mani's career and spiritual development with information about Mani’s religious teachings and contains fragments of his Living (or Great) Gospel and his Letter to Edessa.

Mani was born in 216 C.E. of Iranian (Parthian) parentage in Babylon, Mesopotamia (modern-day Iraq), which was a part of the Persian Empire. He was an exceptionally gifted child and he inherited his father's mystic temperament. At an early age, Mani was influenced by the religious teachings of Mandaeanism and a Jewish ascetic group known as the Elkasites.

According to biographical accounts by al-Biruni (973-1048), preserved in the tenth century encyclopedia the Fihrist of Ibn al-Nadim (died 995 or 998), Mani allegedly received two childhood revelations from an angel whom he called "the Twin." This angel is said to have taught him "divine truths" and encouraged Mani to start a new religion. Subsequently, it is said that Mani began preaching at a young age and he traveled far and wide to foreign lands including Turkistan, India, and Iran.

By his mid-twenties, Mani came to believe that salvation is possible through education, self-denial, vegetarianism, fasting, and chastity. He later claimed to be the Paraclete promised in the New Testament, the Last Prophet or Seal of the Prophets, finalizing a succession of men guided by God, which included figures such as Seth, Noah, Abraham, Shem, Nikotheos, Enoch, Zoroaster, Hermes, Plato, Buddha, and Jesus.

After 40 years of travel, Mani returned to Persia and allegedly converted a brother of the Persian King Shapur (241-272) to his teaching. During his reign, King Shapur I allowed Mani to preach throughout his kingdom. Although having fewer adherents than Zoroastrianism, for example, Manichaeism won the support of high-ranking political figures and with the aid of the Persian Empire, Mani would initiate several missionary excursions.

Mani's first excursion was to the Kushan Empire in northwestern India (several religious paintings in Bamiyan are attributed to him), where he is believed to have lived and taught for some time. He is said to have sailed to the Indus Valley Civilization area of India in 240 or 241 C.E., and to have converted a Buddhist king, the Turan Shah of India. On that occasion, various Buddhist influences seem to have permeated Manichaeism. Richard Foltz (2000) writes:

Buddhist influences were significant in the formation of Mani's religious thought. The transmigration of souls became a Manichaean belief, and the quadripartite structure of the Manichaean community, divided between male and female monks (the "elect") and lay followers (the "hearers") who supported them, appears to be based on that of the Buddhist sangha.

However, on his return to Persia, Mani failed to win the favor of the next generation, and being disapproved of by the Zoroastrian clergy, he was reported to have died in prison awaiting execution by the Persian Emperor Bahram I (273-276 C.E.). Alternate accounts have it that he was either flayed to death or beheaded. 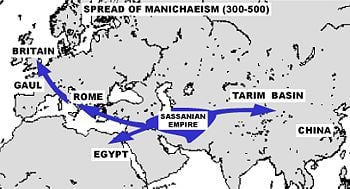 It is theorized that the followers of Manichaeism made every effort to include all known religious traditions. As a result they preserved many apocryphal Christian works, such as the Acts of Thomas, that would otherwise have been lost. Mani was eager to describe himself as a "disciple of Jesus Christ," but the orthodox church rejected him as a heretic.

During his lifetime, Mani’s missionaries were active in Mesopotamia, Persia, Palestine, Syria, and Egypt. Some fragments of a Manichaean book, written in Turkish, mention that in 803 C.E. the Khan of Uyghur Kingdom went to Turfan and sent three Manichaean Magistrates to pay respects to a senior Manichaean cleric in Mobei. The Manichaean manuscripts found in Turfan were written in three different Iranian scripts, viz. Middle Persian, Parthian, and Sogdian script. These documents prove that Sogdia was a very important center of Manichaeism during the early mediaeval period and it was perhaps the Sogdian merchants who brought the religion to Central Asia and China.

The rise of Islam also led to the decline of Manichaeism. However, this was not the end of Mani's religion. During the early tenth century, Uyghur emerged a very powerful empire under the influence of Buddhism with some Manichaean shrines converted into Buddhist temples. However, there was no denying the historical fact that the Uyghurs were worshippers of Mani. The Arabian historian An-Nadim (died c. 998) informs us that the Uyghur khan did his best to project Manichaeism in the Central Asian kingdom of Saman. Chinese documents record that the Uyghur Manichaean clerics came to China to pay tribute to the imperial court in 934 C.E. An envoy of the Song Dynasty by the name of Wang visited Manichaean temples in Gaochang. It appears that the popularity of Manichaeism slowly declined after tenth century in Central Asia.

Influence on Christianity and Islam

Some scholars suggest that Manichaeism continued to subtly influence Christianity through the polarities of good and evil and in the increasingly vivid figure of Satan. Augustine of Hippo converted to Christianity from Manichaeism, and his writings continue to be enormously influential among Roman Catholic theologians.

There are also parallels between Mani and Muhammad, the prophet of Islam. Mani claimed to be the successor of Jesus and other prophets whose teachings he said had been corrupted by their followers. Mani declared himself as the Paraclete: a Biblical title, meaning "one who consoles" or "one who intercedes on our behalf," which the Orthodox tradition understood as referring to God in the person of the Holy Spirit. Mani, like Muhammad, claimed to be the last of the prophets.

Mani was ranked number 83 in Michael H. Hart's list of the most influential figures in history.[1]