Luang Prabang, or Louangphrabang (Lao: ຫລວງພະບາງ, IPA: /luaŋ pʰabaːŋ/), a city located in north central Laos, is situated on the Mekong River about 425 kilometers (264 mi) north of Vientiane, the capital of Louangphrabang Province. The town of Luang Phrabang is best known for its blend of traditional Laotian urban architecture with nineteenth and twentieth century European colonial architecture. UNESCO noted that feature as distinctive, as well as its historical and religious heritage, when designating Luang Phrabang a World Heritage Site in 1995.[1] Luang Prabang developed and grew at the confluence of Mekong River tributaries. It was the capital of the Lan Xang kingdom during the fourteenth century.[2] The city received its name from a famous gold Buddha statue of the same name. The Silk Road passed through it, bringing great wealth and Buddhist monks who often established monasteries along the Silk Road, attracting generous donations for building temples.

Luang Phrabang became a center for Theravada or Hinayana Buddhism featuring eighty monasteries. Wat Xieng Thong temple built in the sixteenth century serves as an outstanding example.[3] Wat Xieng Thong temple presents a style of Buddhist architecture unique to Luang Phrabang, with a multi-layered roof and its facing side decorated with gold carvings. On the back wall of the temple, a Tree of Life depicts the story of Buddha. The monasteries in Luang Phrabang are all active, with attendant monks numbering near 1,200.[4] 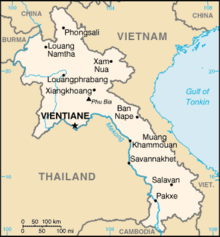 Tai prince, Khun Lo named the place that would later become Laung Phrabang, Muang Sua, following a successful conquest in 698 C.E.[5] Khun Lo had been awarded the town by his father, Khun Borom, associated with the Lao legend of the creation of the world. The Lao share that creation legend with the Shan and other peoples of the region. Khun Lo established a dynasty that held the kingdom Muang Sua in tributary servitude for nearly 100 years.

In the second half of the eighth century, the confederation of Nan-chao meddled often in the affairs of the principalities of the middle Mekong Valley, leading to its occupation of Muang Sua in 709 C.E. Nan-chao princes and administrators replaced the aristocracy of Tai overlords. Dates of the occupation remain unclear, but their rule has been assumed to have ended well before the northward expansion of the Khmer empire under Indravarman I (r. 877-889) and extended as far as the territories of Sipsong Panna on the upper Mekong.[6]

A street in Luang Prabang

In the meantime, the Khmer dynasty founded an outpost at Xay Fong near Vientiane, and the Champa dynasty expanded again in southern Laos, maintaining its presence on the banks of the Mekong until 1070 C.E. Chanthaphanit, the local ruler of Xay Fong, moved north to Muang Sua and was accepted peacefully as ruler after the departure of the Nan-chao administrators. Chanthaphanit and his son had long reigns, during which the town became known by the Tai name Xieng Dong Xieng Thong. The dynasty eventually became involved in the squabbles of a number of principalities. Khun Chuang, a warlike ruler who may have been a Kammu (alternate spellings include Khamu and Khmu) tribesman, extended his territory as a result of the warring of those principalities and probably ruled from 1128 to 1169. Under Khun Chuang, a single family ruled over a far-flung territory and reinstituted the Siamese administrative system of the seventh century. During that period, Mahayana Buddhism subsumed Theravada Buddhism.[7] 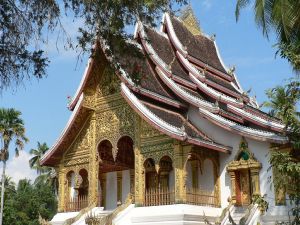