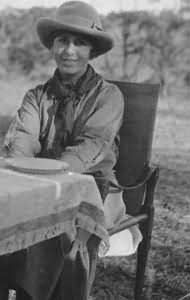 Baroness Karen von Blixen-Finecke (April 17, 1885 – September 7, 1962), née Dinesen, was a Danish author also known by her pen name Isak Dinesen. Blixen wrote works both in Danish and in English; but is best known for Out of Africa, her account of living in Kenya, and for her story, Babette's Feast, both of which were adapted into highly acclaimed motion pictures. Dinesen's short story writing was influenced by the Bible, the stories of the Arabian nights, Aesop's Fables, the works of Homer, and the fairy tales of Hans Christian Andersen, her fellow countryman.

Her memoirs of pioneering a coffee farm in Africa, where she had an affinity for all that was natural, brought her worldwide recognition as an authoress. Dinesen felt the native people—the Somali and the Masai tribes of Eastern Africa—with their rich tradition of oral storytelling, had an ear for her romantic and "old fashioned" style of writing. She particularly loved to tell stories with rhyme because it was something novel to their culture. Blixen described them saying about her storytelling, "…'Please, Memsahib, talk like rain,' so then I knew they had liked it, for rain was very precious to us there."

Karen Dinesen, called Tania by her friends, was the the daughter of army officer Wilhelm Dinesen, and Ingeborg Westenholz, (and sister of Thomas Dinesen.) She was born in Rungsted, on the island of Zealand, in Denmark. Her father, a colorful character himself, was a soldier-of-fortune and adventurer who lived and worked as a fur trapper among the Sokaogan Chippewa in North America. He returned to Denmark but not before fathering a child with a Native American woman among the Chippewa. Karen's family, among the aristocratic and upper class, sent her to school at the Royal Academy of Art in Copenhagen. She also attended schools in Paris, and Rome. Later as a writer, she was to write eloquently in both her native tongue, as well as in English.

She began publishing her short stories in various Danish periodicals in 1905 under the pseudonym Osceola, the name of the Seminole Indian leader, probably inspired by her father's time in America. Wilhelm Dinesen killed himself in 1895 after being diagnosed with syphilis when Karen was only ten years old. In many ways, as an adventurer and writer, Karen was her father's daughter; even suffering from the same disease. Its frightening specter cast a great pall over her future.

In 1914 Karen Dinesen married her Swedish second cousin, Baron Bror von Blixen-Finecke, giving her the title Baroness. The couple moved to Kenya, and celebrated their wedding in Mombasa the day after their arrival. As pioneers to Africa they operated a coffee plantation bought with funds donated to them by their families. Life in Africa for the pair was initially blissful as Karen wrote, "Here at long last one was in a position not to give a damn for all conventions, here was a new kind of freedom which until then one had only found in dreams!" The romantic ideals and notions that the couple began with in Africa would eventually give way to realities and hardships that would severely challenge them.

The Blixen's marriage, based on the idea of sharing an adventure together, did not last. Bror, gregarious and outgoing, was frequently away for long periods on safaris or military campaigns. His nomadic lifestyle was at odds with the demands of a married gentlemen farmer. It was during this first year of marriage that Karen may have contracted syphilis from Bror. Although she never exhibited the extreme late stages of the disease, such as loss of mental acumen, its diagnosis and subsequent treatments would plague her. In those times, syphilis, greatly dreaded and feared, was treated with arsenic and mercury; treatments that most likely contributed to the decline in her health over the years. The couple separated in 1921 and were divorced in 1925 with Karen being left to run the coffee plantation as it went through misfortune and mishap.

While still in Africa, she met and fell in love with English big game hunter Denys Finch Hatton, with whom she lived from 1926 to 1931. In her memoir Out of Africa he is simply described as a friend. They never married, most likely due to Karen’s health issues, and after suffering two miscarriages, she was never able to have children. Their intimate, but sometimes volatile relationship, was prematurely ended by Finch Hatton's death in a plane crash in 1931. This tragedy, compounded by the failure of the coffee plantation (due partly to the Great Depression's worldwide effects), took its toll upon Dinesen's health and finances. She was forced to abandon her beloved farm in 1931 and return to Denmark. In saying goodbye to Africa, a place where she experienced both tremendous love and wrenching loss, she reflected:

Although, she tried to visit on a few occasions, Karen Blixen was never able to return to Africa.

Life as a writer

After returning to Denmark, Blixen earnestly immersed herself in a writing career. In 1934, her authorial debut, Seven Gothic Tales, was published under the pseudonym of "Isak Dinesen," Isak meaning "laughter" and Dinesen, being her maiden name. She decided to publish the book in English since there would be a greater chance of reaching a wider audience. These were written while Karen lived in Africa. The plot lines contain elements of the exotic and the supernatural, usually within a medieval setting. Gothic Tales was well received and further publication of the book in the United Kingdom and Denmark would follow. Her second book, the one that became her best known, was her lyrical and compelling memoir Out of Africa published in 1937. This book, vivid in its description of farming and native peoples; however, lacks historical detail about her time there and the narrative has been described as "though the author were recounting a dream."

I had a farm in Africa, at the foot of the Ngong Hills. The equator runs across these highlands, a hundred miles to the North, and the farm lay at an altitude of over six thousand feet. In the day-time you felt that you had got high up, near to the sun, but the early mornings and evenings were limpid and restful, and the nights were cold.

In the face of war and industrialism it was prized by readers for being romantic, mysterious, and exotic; a description that fits the author as well as the book. Out of Africa sealed Dinesen's reputation and gained her worldwide recognition as an author. In 1939 she was awarded the Tagea Brandt Rejselegat.[1]

During World War II, when Denmark was occupied by the Nazis, Blixen started to write her only full-length novel, The Angelic Avengers, under another pseudonym 'Pierre Andrezel'. Published in 1944, it has been interpreted as an allegory of Nazism. Winter's Tales, published in 1942, was smuggled out of the occupied country through Sweden. In the United States a pocketbook edition was printed for soldiers fighting in different parts of the world.

Her writing during most of the 1940s and 1950s consisted of tales in the storytelling tradition that she began in Africa. The most famous is Babette's Feast, about an old cook, who is not able to show her true skills until she gets an opportunity at a celebration. An Immortal Story, in which an elderly man tries to buy youth, was adapted onto the screen in 1968, by Orson Welles, a great admirer of her work and life.

Blixen was nominated for the Nobel Prize twice, in 1954 and 1957. She was widely respected by her American contemporaries, such as Ernest Hemingway and Truman Capote. During her tour to the United States in 1959, the list of writers who paid visits to her included Arthur Miller, E. E. Cummings and Pearl Buck.

Extensive tests were unable to reveal evidence of syphilis in her system after 1925, although she did suffer a mild but permanent loss of sensation in her legs that could be attributed to use of arsenic as a tonic in Africa. The source of her abdominal problems remained unknown but such flareups often coincided with stressful events in Blixen's life, such as the death of her mother. She also reportedly suffered from "panic attacks" which she describes as "… a sensation like walking in a nightmare." Blixen's health continued to deteriorate into the 1950s.

In 1955 she had a third of her stomach removed due to an ulcer and writing became impossible, although she did do several radio broadcasts. In her letters from Africa and later during her life in Denmark, Blixen speculated as to whether her pain and illness could be psychosomatic in origin. However, publicly she did nothing to dispel the impression that she was suffering from syphilis—a disease that afflicted heroes and poets, as well as her own father. Whatever the veracity was in regards to her various diagnoses, the stigma attached to this illness suited the authoress’ purpose in cultivating a mysterious persona for herself—she insisted on being called "Baroness," – writer of esoteric tales. [2]

Unable to eat, Blixen died in 1962 at Rungstedlund, her family's estate where she was born, at the age of 77.

Karen Blixen lived most of her life at the family estate Rungstedlund, which was acquired by her father in 1879. The property is located in Rungsted, 13 miles NNE of Copenhagen, Denmark. The oldest parts of the estate date back to 1680, and it has been operated both as an inn and as a farm. Most of Blixen's writing took place in Ewald's Room, named after author Johannes Ewald. The property is managed by the Rungstedlund Foundation, founded by Blixen and her siblings. The property opened to the public as a museum in 1991.

Her Legacy and Works

Karen, the suburb of Nairobi where Blixen made her home and operated her coffee plantation, was named after her. There is a Karen Blixen Coffee House and Museum, set near her former home.

Karen Blixen's grand nephew, Anders Westenholz, is also an accomplished writer, who among other things have written books about her and her literature.