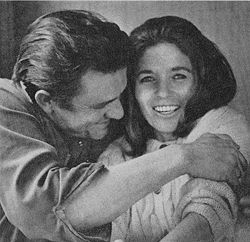 June Carter Cash with her husband, Johnny Cash, in 1969.

Valerie June Carter Cash (June 23, 1929 – May 15, 2003) was a singer, songwriter, actress, and comedian. She was a member of the famed pioneer country act the Carter Family and the second wife of singer Johnny Cash. In addition to her success as a singer, she was a talented comic and also played the guitar, banjo, and autoharp.

June and Johnny had major hits as a singing team with June's composition, “Jackson” and the Bob Dylan song, “It Ain’t Me, Babe.” June also co-wrote Johnny's smash hit, “Ring of Fire.” Outside of music, she had several memorable acting roles, and her romance with Johnny was memorialized in the 2005 movie Walk the Line, for which actress Reese Witherspoon won an Oscar for her portrayal of June.

A deeply religious woman, June credits her faith in God for enabling her to help Johnny overcome serious drug addiction problems. Her greatest success came late in life, after retiring from public performing to devote herself to being a wife and mother.

June was born Valerie June Carter in Maces Springs, Virginia. She was born into country music and performed with the Carter Family from a young age, beginning around 1939. In March 1943, when the original Carter Family trio stopped recording together, Maybelle Carter, with encouragement from her husband Ezra, formed Mother Maybelle & the Carter Sisters. The "sisters" were June, Helen, and Anita.

The new group first aired on radio station WRNL in Richmond, Virginia, in the spring of 1943. Doc Addington, Maybelle's brother, and Carl McConnell, her cousin, joined them in late 1945. June, then 16, was a co-announcer with Ken Allyn and did the commercials on the radio shows. She often played the comic "kid sister" role in the act.

For the next year, the Carters, with Doc and Carl, did show dates within driving range of Richmond through Virginia, Maryland, Delaware and Pennsylvania. June said she had to work harder at her music than her sisters, but she had her own special talent, comedy. A highlight of the road shows was her "Aunt Polly" routine. Carl wrote in his memoirs that June was "a natural born clown, if there ever was one." June attended South Rowan High School during this period.

The group soon began ranging farther west and south. June's father Ezra declined offers from the Grand Ole Opry to move the family to Nashville, Tennessee, a number of times. A sticking point in the negotiations was that the Opry would not permit guitarist Chet Atkins, who backed the group for their performances at radio station KWTO in Springfield, Missouri, accompany the group. Finally, in 1950 Opry management relented and the group, along with Atkins, became part of the Opry Company. Here the family befriended Hank Williams and other country stars.

With her thin and lanky frame, June often played a comedic foil during the group's performances alongside other Opry stars Faron Young and Webb Pierce. During this time, June and the Carters’ worked and became friendly with the young Elvis Presley. It was Presley who introduced June to the recorded voice of Johnny Cash. June recalled: "Somehow this low voice just penetrated my heart and spoke to my loneliness." Later, backstage at the Opry, June would meet Johnny in the flesh. He would eventually become her singing partner and husband.

In 1949, June scored a hit on both the country and pop charts with a comic rendition of “Baby it's Cold Outside.” recorded with duo Homer & Jethro. As a solo artist, she became somewhat successful with the upbeat country tunes of the 1950s, such as “Jukebox Blues.”

She was married to country singer Carl Smith on July 9, 1952. They had one daughter, Rebecca Carlene Smith, aka Carlene Carter. The couple divorced in 1956. On November 11, 1957, June married stock car driver Edwin "Rip" Nix and had another daughter, Rozanna aka Rosie Nix Adams. June and Nix were divorced in 1966. Both daughters became singers. Rosie Nix Adams died in 2003 in a bus from possible carbon monoxide poisoning.

June began to travel with the Johnny Cash Show in the 1960s and was soon joined there by her mother Maybelle and the other Carter sisters. Her duets with Johnny were particularly popular in live performances.

In 1962 June and Merle Kilgore wrote “Ring of Fire,” which became a major hit for Johnny and was also the theme song of a popular movie of the same name. The song was inspired by June's feelings of conflict, arising from her relationship with Johnny, with whom she had fallen in love.

In 1964, June recorded “It Ain't Me Babe” with Johnny, again making both country and pop charts. Their biggest hit together, however, was “Jackson” which reached number two on the country charts. In 1967, the song won them a Grammy Award in the Best Country & Western Performance Duet, Trio Or Group (Vocal Or Instrumental) category.

In 1968, 12 years after they had first met backstage at the Grand Ole Opry, Johnny proposed to June during a live performance in London, Ontario. Their marriage spanned 35 years. June and Johnny had one child, John Carter Cash, who was born in 1970.

In 1970, June and Johnny won a second Grammy in the category newly titled Best Country Performance by a Duo or Group for “If I Were a Carpenter.”

The two often sang gospel music together, and Carter Cash's album of religious songs, “Little Church in the Wildwood” remains a favorite of her fans today. 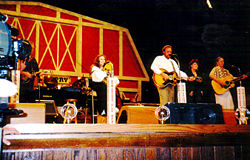 Following a long absence from the spotlight, June returned to record the 1999 solo album “Press On,” which won a Grammy for Best Traditional Folk Album.

June Carter Cash died on May 15, 2003, in Nashville, Tennessee, at the age of 73. She died of complications following heart valve replacement surgery. Less than half a year later, Johnny also died.

In films and television

June Carter Cash is best known for singing and songwriting, but she was also an accomplished actress. Famed film director Elia Kazan spotted her talent in her cornpone comedian days and later recruited her to study acting in New York. Her best know acting roles included “Momma Dewey,” the mother of the main character in Robert Duvall's 1997 movie The Apostle and “Sister Ruth,” wife to Johnny Cash's character, “Kid Cole,” on the television series Dr. Quinn, Medicine Woman (1993-1997).

In 2005, June became known to her widest audience ever through the film Walk the Line, based on her romance with Johnny. That same year, Columbia Legacy issued a two-disc set, Keep on the Sunny Side: June Carter Cash–Her Life in Music.