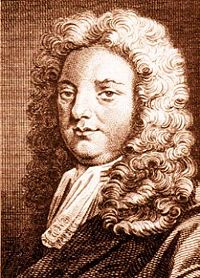 John Blow (1649 – October 1, 1708) was an English composer and organist and is known as the most significant English composer of his time. Blow's dramatic masque, Venus and Adonis, was one of the finest stage works written to a text in English and this work became an example for Henry Purcell's Dido and Aeneas. Blow's pupils included Henry Purcell and William Croft. As a master composer for commemorative events as well as all genres of English sacred and secular vocal music, John Blow's main contribution to English society and the musical world was his profound maturity and integrity which gave each of his works the sounds of gentle and mild mannerisms.

Blow was probably born at North Collingham in Nottinghamshire. He became a chorister of the Chapel Royal, and distinguished himself by his proficiency in music, especially with his keyboard skills, organ performances, and composing. He composed several anthems at an unusually early age, including Lord, Thou host been our refuge, Lord, rebuke me not and the so-called "club anthem," I will always give thanks, the last in collaboration with Pelham Humfrey and William Turner, either in honor of a victory over the Dutch in 1665, or more probably simply to commemorate the friendly interrelationships between the three choristers.

This was also the time of Blow's composition of a two-part setting of Robert Herrick's Goe, perjur'd man, written at the request of Charles II to imitate Giacomo Carissimi's Dite, o cieli. In 1669 Blow became organist of Westminster Abbey. In 1673 he was made a gentleman of the Chapel Royal and in the September of this year he married Elizabeth Braddock, who died in childbirth ten years later. These were difficult years for Blow, who had financial struggles even though he was becoming moe famous as a composer and musician.

Blow, who by 1678 was a doctor of music, was named in 1685 as one of the private musicians for James II. Between 1680 and 1687 he wrote his only stage composition of which any record survives, the Masque opera for the entertainment of the King, Venus and Adonis. In this Mary Davies played the part of Venus, and her daughter by Charles II, Lady Mary Tudor, appeared as Cupid.

In 1687 he became master of the choir of St Paul's Cathedral; in 1695 he was elected organist of St. Margaret's, Westminster, and is said to have resumed his post as organist of Westminster Abbey, from which in 1680 he had retired or been dismissed to make way for Purcell. In 1699 he was appointed to the newly created post of Composer to the Chapel Royal, a position which acclaimed that John Blow was England's greatest living composer. Blow died on October 1 1708 at his house in Broad Sanctuary, and was buried in the north aisle of Westminster Abbey.

His strengths are in his anthems, songs, odes and operas of which "Venus and Adonis" is the best known. With his "Begin the Song," which is a special ode for vocal soloist, chorus and instrumental ensemble for the celebration of St. Cecilia's Day, his sensitive "Ode on the Death of Mr. Henry Purcell" for two counter-tenors, and two recorders, and his anthem, "The Lord God is a Sun and Shield" for vocal soloist, chorus, instrumental ensemble and organ, Blow demonstrates that he had a God-centeredness in his spiritual attitudes and his musical vigor. He understood that God was the final reality and used this core value to pass onto his listeners within melodious vocal solos, vibrant choruses, delicate instrumental ensembles and the subtle tone colors, pitches, and volume of the organ.

Fourteen services and more than a hundred anthems by Blow are known. In addition to his purely ecclesiastical music Blow wrote Great sir, the joy of all our hearts, an ode for New Year's Day 1682, similar compositions for 1683, 1686, 1687, 1688, 1689, 1693, 1694 and 1700; odes, and the like, for the celebration of St Cecilia's Day for 1684, 1691, 1695 and 1700; for the coronation of James II, two anthems, Behold, O God, our Defender and God spake sometimes in visions; some harpsichord pieces for the second part of Henry Playford's Musick's handmaid (1689); Epicedium for Queen Mary (1695) and Ode on the Death of Purcell (1696). In 1700 he published his Amphion Anglicus, a collection of pieces of music for one, two, three and four voices, with a figured bass accompaniment. A famous page in Charles Burney's History of Music is devoted to illustrations of Blow's "crudities," most of which only show the meritorious if immature efforts in expression characteristic of English music at the time, while some of them (where Burney says "Here we are lost") are really excellent.

John Blow's musical productions were in all forms of seventeenth-century English instrumental music, religious music, secular choral music, songs and masques or music for the stage. During this time of great political volatility due to the successions in the monarchy, John Blow revived the public's confidence in their government and reinvigorated the faith that English peoples had in their church. His dramatic commemorative music, i.e. the music for the mourning of the passing of Queen Mary, captured the effects of polyphony and dissonances which were passed down to subsequent composers such as Purcell and Croft for the pleasure of the English musicians and audiences.

Retrieved from https://www.newworldencyclopedia.org/p/index.php?title=John_Blow&oldid=1075152
Categories:
This page was last edited on 3 August 2022, at 04:22.
Content is available under Creative Commons Attribution/Share-Alike License; additional terms may apply. See Terms of Use for details.