Johann Jakob Froberger (May 18, 1616 – May 7, 1667) was a German Baroque composer, keyboard virtuoso, and organist. He was very well known during his lifetime and modern scholars consider him to be one of the most important keyboard composers before Johann Sebastian Bach. Froberger came from a musical family and his constant striving to be the best that he could be shows a mature consciousness to be living for the service of others, first for his family, then for his community, then church and state. His core philosophy was to be of help for the greater good in music.

Froberger was born in 1616 in Stuttgart, and probably received his first music lessons from his father. In 1634, he moved to Vienna and became court organist there in 1637. In the same year, he went to Rome to study under Girolamo Frescobaldi. Froberger returned to Vienna in 1641, and remained there until 1657, frequently traveling to carry out diplomatic missions for the Holy Roman Emperor, Ferdinand III. He visited Brussels, Dresden, Antwerp, London, and most importantly, Paris, where he lived for three years (1650-1653) and studied the French string and keyboard styles. After Ferdinand's death, Froberger went to Alsace where he became a music teacher. He died in Montbeliard in 1667. 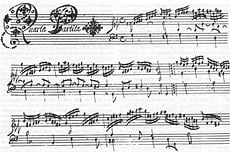 The fourth suite from one of the Vienna manuscripts.

Froberger's surviving output consists of a large number of keyboard instrumental compositions (intended for organ, harpsichord or clavichord), several dozens of harpsichord suites, and two motets. A few toccatas of the so-called elevation variety and the two motets mentioned are the only sacred pieces of these. Froberger's interest was in secular music and not so much in sacred music.

The three principal sources for Froberger's music are the following manuscripts:

Many other manuscripts contain his music, particularly the well-known 'Bauyn manuscript' and the recently discovered 'Strasbourg manuscript' (possibly compiled by Michael Bulyowsky).

Two standard numbering systems are used to identify Froberger's works. These are:

One of the toccatas from the Vienna manuscripts.

Froberger is usually credited as the creator of the Baroque suite: it was the typical Froberger suite that established the allemande, courante, sarabande, and gigue as the obligatory parts of a suite. There is some controversy surrounding the placement of the gigue; in Froberger's autograph manuscripts it is almost always the second movement, while most suites by later composers of the era place the gigue at the end of the suite. Most of the suites display the influence of French lute music.

Froberger was one of the earliest composers who produced programmatic pieces, which he would usually include in his suites. These pieces are always very personal, written in an affective style and with individual titles. They include the following (in alphabetical order): 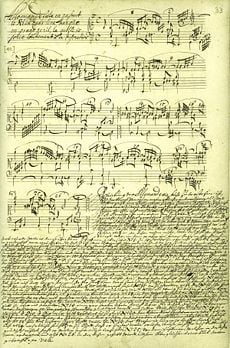 These works frequently feature musical metaphors. In the lamentations on the deaths of the lutenist Blancrocher and Ferdinand III, Froberger represents Blacrocher's fatal fall down a flight of stairs with a descending scale, and Ferdinand's ascent into heaven with an ascending one. In the Ferdinand III lamentation, he ends the piece with a single voice repeating an F three times. The Allemande, faite en passat le Rhin contains 26 numbered passages with an explanation for each. The structure and style of Froberger's programmatic works contributed to the development of the 'unmeasured prelude'.

Froberger's toccatas are reminiscent of Frescobaldi's. Most feature multiple sections alternating between free, improvisatory music and parts written in imitative counterpoint. Almost all other pieces are also sectional. The majority of the ricercars are of the imitative variety, with multiple sections exploring different themes in a fugal manner. The fantasias are more or less similar to ricercars (usually exploring the same themes), except some have no sections at all or with less contrasting sections, and usually exploring subjects written using predominantly long note values. Froberger's capriccios and canzonas typically have several fugal sections. Some of the canzonas are variation canzonas that feature a single theme varied through several sections. Chromaticisms are rare, even in toccatas. The imitative works are characterized by an economy of themes during the episodes (which are often based on the subject), alterations of the subject after the initial exposition, and unusually for the period, frequent use of subjects on scale degrees other than 1 and 5.

Only a few compositions were published during his lifetime, yet, Froberger's music was widely spread in Europe in hand-written copies, and he was one of the most famous composers of the era. Because of his travels and his ability to create music in a variety of national styles, Froberger, along with other cosmopolitan composers such as Johann Kaspar Kerll, contributed greatly to the exchange of musical traditions in Europe. He influenced more or less every composer of the century, and his music was known and performed well into the eighteenth century.

Louis Couperin, Georg Böhm, Dieterich Buxtehude, and Johann Pachelbel are among the composers who were influenced by Froberger. Various less known composers such as François Roberday or Johann Caspar Ferdinand Fischer also knew his music and borrowed from it. Johann Sebastian Bach was influenced by Froberger, although only to a certain degree. One of the fugues of the Well-Tempered Clavier uses a subject from Froberger's Ricercar No. 4 (FbWV 404); however, Bach probably picked the theme from J.C.F. Fischer, who borrowed it from Froberger for his Ariadne musica, published some 20 years before the Well-Tempered Clavier.

Retrieved from https://www.newworldencyclopedia.org/p/index.php?title=Johann_Jakob_Froberger&oldid=976276
Categories:
This page was last edited on 20 November 2013, at 16:50.
Content is available under Creative Commons Attribution/Share-Alike License; additional terms may apply. See Terms of Use for details.