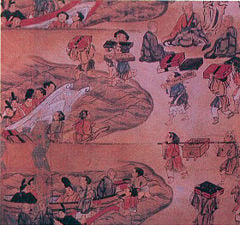 Jianzhen's sixth attempt of crossing the sea to Japan. From 社会历史博物馆

Jianzhen or Ganjin (Chien-chen鑒真 or 鑑真; 688–763) was a Chinese monk who helped to propagate Buddhism in Japan. In 742, Ganjin was visited by two Japanese priests and emissaries, Yoei (栄叡) and Fusho (普照), who implored him to come to Japan and establish a proper method for instructing and ordaining Buddhist priests there. Between 743 and 748, Jianzhen made five unsuccessful attempts to cross to Japan. In 753, though he had already become blind, he determined to try again, and in 754 he finally arrived in Nara and took up residence at the imperial temple of Tōdaiji. The retired Emperor and reigning Empress were among the first to be ordained. In 759, under the patronage of Empress Koken, he set up a private temple, the Tōshōdai-ji (唐招提寺), and founded a school, where he taught until his death in 763.

Jianzhen promulgated the Lü-tsung (Vinaya) school of Buddhism, which was primarily concerned with vinaya, the rules of monastic and religious practice. In Japan, it became known as the Risshu or Ritsu (Japanese for Vinaya) school. The teachings of Ritsu were accepted by most Japanese Buddhists, and there are still Ritsu temples and followers in Japan. Chinese artists accompanying Jianzhen are thought to have introduced a new technique of sculpture, the layering of lacquered cloth over a carved wood core (mokushin kanshitsu). 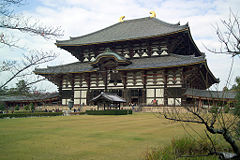 Jianzhen was born in 688 in Jiangyin county in Guangling (present day Yangzhou( 揚州), Jiangsu 江蘇) with the surname of Chunyu (淳于). It is said that in 701, when Jianzhen was thirteen, he visited the temple (大雲寺) and was so impressed by the statue of Buddha that he decided to renounce the world. At the age of 14, he entered the priesthood at Ta-yyn-ssu temple in Yang-chou and studied the T'ient'ai and Precepts teachings in Luoyang and Ch'ang-an. At twenty, he traveled to Chang'an for study. Besides his learning in the Tripitaka, Jianzhen is also said to have been expert in medicine. He opened the Buddhist temple as a place of healing, creating the Beitian Court (悲田院)—a hospital within Daming Temple.

Ganjin preached in Luoyang and Chang'an (present-day Xi’an) and became a renowned scholar, and organizer of relief efforts for poor people. After returning six years later to Yangzhou(揚州)., Jianzhen became an abbot of Daming (Ta-ming-ssu) Temple (大明寺) in Yangzhou . While he was lecturing there in 742, two Japanese priests and emissaries, Yoei and Fusho, who had heard of Jianzhen’s great renown, implored him to come to Japan and instruct priests and nuns there in the precepts. Yoei (栄叡) and Fusho (普照) had been dispatched to China 10 years earlier by the Japanese emperor Shomu (聖武天皇) to invite Chinese priests well versed in Buddhist teachings and precepts to teach in Japan and to establish there an authentic Buddhist ordination platform, which Japan lacked.

Despite protests from his disciples, Jianzhen made preparations and in the spring of 743, was ready for the long voyage across the East China Sea to Japan. The crossing failed and in the following years, Jianzhen made three more attempts but was thwarted each time by unfavorable conditions or government intervention.

In the summer of 748, Jianzhen made his fifth attempt to reach Japan. Leaving from Yangzhou, he made it to the Zhoushan Archipelago (舟山), a prefectural city in northeastern Zhejiang province, consisting solely of islands which lies across the mouth of the Hangzhou Bay, and is separated from the coast of modern Zhejiang ( 浙江) by a narrow body of water. But the ship was blown off course and ended up in the Yande (延德) commandery on Hainan Island (海南岛). Jianzhen was then forced to make his way back to Yangzhou by land, lecturing at a number of monasteries on the way. Jianzhen travelled along the Gan River ( 赣江) to Jiujiang ( 九江), and then down the Yangtze River ( 長江). The entire failed enterprise took him close to three years, and by the time Jianzhen returned to Yangzhou, he was blind from an infection.

In the autumn of 753, the blind Jianzhen decided to join a Japanese emissary ship returning to its home country. After an eventful sea journey of several months, the group finally landed at Kagoshima( (鹿児島市), Kyūshū (九州), on December 20.

They reached Nara( (奈良市) in the spring of the next year and were welcomed by the Emperor. At Nara, Jianzhen presided over Tōdai-ji (東大寺), now among the oldest Buddhist establishments in Japan. The Chinese monks who traveled with him introduced Chinese religious sculpture to the Japanese. In addition to the scriptures of the Precepts school, Jianzhen brought with him those of the T'ient'ai school, which Dengyo (767-822), the founder of the Japanese Tendai school, later studied.

In 755, the first ordination platform in Japan was constructed at Tōdai-ji, on the place where the former Emperor Shōmu (聖武天皇 ) and Empress Kōken (孝謙天皇 ) had received ordination by Jianzhen a year earlier. In 756, Jianzhen conducted ceremonies conferring the precepts on the Retired Emperor Shomu and some 400 others. The same year, he established the Precepts school. In the fifth month of 756, he was appointed general supervisor of priests, and in the eighth month, general administrator of priests. In 759, he retired to a piece of land granted to him by the imperial court in the western part of Nara, where under the patronage of Empress Koken, he set up a private temple, the Tōshōdai-ji (唐招提寺), and founded a school. During the ten years until his death in Japan, Jianzhen not only propagated the Buddhist faith among the aristocracy, but also served as an important conductor of Chinese culture.

Jianzhen died on the sixth day of the fifth month of 763. A dry-lacquer statue of him made shortly after his death can still be seen at Tōshōdai-ji[1]. Recognized as one of the greatest of its type, the statue was temporarily brought to Jianzhen's original temple in Yangzhou in 1980 as part of a friendship exchange between Japan and China.

Jianzhen is credited with the introduction of the Ritsu school of Buddhism to Japan, which focused on the vinaya, or Buddhist monastic rules.

The Lü-tsung (Vinaya) school of Buddhism, which originated in China during the seventh century, was primarily concerned with vinaya, or the rules of monastic and religious practice, and stressed ethical precepts and disciplinary rules. It was founded by the monk Tao-hsüan, on the basis of early Theravada texts that emphasized the letter of the law, in contrast to later Mahayana texts that emphasized the spirit, or essence, of moral law. A century later, it was introduced to Japan by Jianzhen (Japanese: Ganjin) at the invitation of the Japanese emperor. There it was known as Risshu or Ritsu (Japanese for Vinaya). It was immediately embraced by the Japanese court, and the reigning empress was among the first to be ordained by Jianzhen.

In Japan, the emphasis of Vinaya in Japan was on the correctness and validity of ordination (initiation) into the sangha, especially for monks and nuns. Disagreement soon arose between those who stressed the formal, external aspect, and those who stressed the spiritual, internal aspect, of monastic vows and discipline. In the thirteenth century, the priest Eison initiated a reform movement within the Ritsu school in Japan, employing more informal, self-imposed vows. The teachings of Ritsu were accepted by most Japanese Buddhists, and there are still Ritsu temples and followers in Japan.

Chinese artists accompanying Jianzhen are thought to have introduced a new technique of sculpture, the layering of lacquered cloth over a carved wood core (mokushin kanshitsu). Decorative techniques similar to those used on hollow-core lacquer sculpture were used to enhance clothing and other details of the image. To prevent splitting caused by expansion and contraction, the wood core was usually partially hollowed. The Toshodai Temple houses several works made using this new wood-core lacquer technique, including a 534-centimetre-high, 11-headed, 1,000-armed Senju Kannon (Sahasrabhuja).

In addition to new construction techniques, sculpture of the late Nara period also demonstrates a stylistic shift, probably following a Chinese stye, toward a more substantial, fleshy form, and patterned drapery. A typical garment is tight-fitting at the thighs, with drapery elsewhere carved in evenly spaced, concentric waves. This style, hompa-shiki, was further developed during the early Heian period.

When Jianzhen arrived in Japan in 753, he first took up residence at the Todaiji Temple complex. In 759, Toshodai Temple was constructed for him. It was a reconstruction of Higashichoshuden, initially used as a residence for Prince Niitabe, which was disassembled and moved from Heijo Palace. At that time the roof design was restyled in the contemporary gabled and hipped style. In 1275, the kodo was renovated; it is the only structure retaining the style of a Tenpyo period palace. The Kondo (Main Hall), which was completed in 810, after Ganjin's death, has a colonnade of eight pillars in front, and three main images of Rushanabutuzazo, Yakushinyoraizo and Senjukannonzo, flanked by statues of Bonten and Taishakuten statues of Shinennozo are to be found in the four corners of the hall. It is designated a national treasure; no other Japanese temple retains such a Nara period structure.

A statue of the priest Ganjin is exhibited in Miedo from June 5 to June 7 to celebrate his memorial day. The Miedo was reconstructed in the Shinden style in 1964 and was moved to Toshodaiji Temple where it now stands. [2]