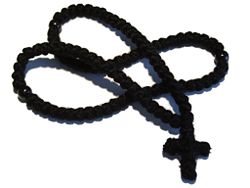 The Jesus Prayer (also called the Prayer of the Heart), is a short but widely used prayer in the Eastern Orthodox Church, which forms an integral part of Hesychasm. The most common form of the prayer involves repetition of the phrase, "Lord Jesus Christ, Son of God, have mercy on me, a sinner." The Jesus Prayer is found in the Philokalia, a collection of religious texts compiled by St. Nicodemus the Hagiorite and St. Makarios of Corinth.

Today, the Jesus Prayer remains a popular part of devotional practice in Eastern Orthodox Christianity. It is especially popular among the monks of Mount Athos in Greece.

The prayer's origin most likely derives from the early Christian monks of the Egyptian desert, which was settled by the monastic Desert Fathers in the fifth century.[2]

The earliest known mention is in On Spiritual Knowledge and Discrimination of St. Diadochos of Photiki (400-ca. 486), a work found in the first volume of the Philokalia. The Jesus Prayer is described in Diadochos's work in terms very similar to Saint John Cassian's (ca. 360-435) description in the Conferences 9 and 10 of the repetitive use of a passage of the Psalms. St. Diadochos ties the practice of the Jesus Prayer to the purification of the soul and teaches that repetition of the prayer produces inner peace.

The practice of repeating the prayer continually dates back to at least the fifth century. The use of the Jesus Prayer is recommended in the Ladder of Divine Ascent of St. John Climacus (ca. 523–606) and in the work of St. Hesychios the Priest (ca. eigth century), Pros Theodoulon, found in the first volume of the Philokalia.

The Jesus Prayer is composed of two statements. The first one is a statement of faith, acknowledging the divine nature of Christ. The second one is the acknowledgment of ones own sinfulness. Out of them the petition itself emerges: "have mercy." For the Eastern Orthodox the power of the Jesus Prayer comes not from its content, but from the very invocation of the Jesus' name.

Theologically, the Jesus Prayer is considered to be the response of the Holy Tradition to the lesson taught by the parable of the Publican and the Pharisee, in which the Pharisee demonstrates the improper way to pray by exclaiming: "Thank you Lord that I am not like the Publican," whereas the Publican prays correctly in humility, saying "Lord have mercy on me, the sinner" (Luke 18:10-14).[3] 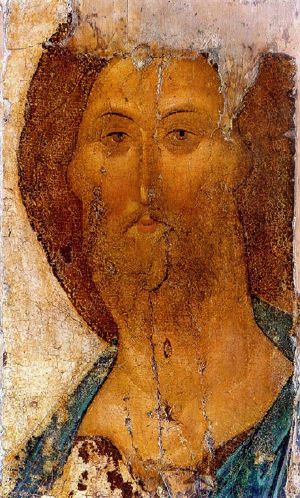 The Eastern Orthodox Church holds a non-juridical view of sin, by contrast to the satisfaction view of atonement for sin as articulated in the West, firstly by Anselm of Canterbury (as debt of honor) and Thomas Aquinas (as a moral debt). The terms used in the East are less legalistic (grace, punishment), and more medical (sickness, healing) with less exacting precision. Sin, therefore, does not carry with it the guilt for breaking a rule, but rather the impetus to become something more than what men usually are. One repents not because one is or is not virtuous, but because human nature can change. Repentance (metanoia, "changing one's mind") is not remorse, justification, or punishment, but a continual enactment of one's freedom, deriving from renewed choice and leading to restoration (the return to man's original state).[4]

As stated at the local Council of Constantinople in 1157, Christ brought his redemptive sacrifice not to the Father alone, but to the Trinity as a whole. In the Eastern Orthodox theology redemption is not seen as ransom. It is the reconciliation of God with man, the manifestation of God’s love for humanity. Thus, it is not the anger of God the Father but His love that lies behind the sacrificial death of his son on the cross.

The redemption of man is not considered to have taken place only in the past, but continues to this day through theosis. The ini­tiative belongs to God, but presupposes man's active accep­tance (not an action only, but an attitude), which is a way of perpetually receiving God.[4]

Although some aspects of the Jesus Prayer may resemble some aspects of other traditions, its Christian character is central rather than mere "local color." The aim of the Christian practicing it is not humility, love, or purification of sinful thoughts, but becoming holy and seeking union with God (theosis), which subsumes them. Thus, for the Eastern Orthodox:

A magistral way of meeting God for the Eastern Orthodox, the Jesus Prayer does not harbor any secrets in itself, nor does its practice reveal any esoteric truths. Instead, as a hesychastic practice, it demands setting the mind apart from rational activities and ignoring the physical senses for the experiential knowledge of God. It stands along with the regular expected actions of the believer (prayer, almsgiving, repentance, fasting etc.) as the response of the Orthodox Tradition to Saint Paul's challenge to "pray without ceasing" (1 Thess 5:17).[3]

The practice of the Jesus Prayer is integrated into the mental ascesis undertaken by the Orthodox monastic in the practice of hesychasm. In the Eastern tradition the prayer is said or prayed repeatedly, often with the aid of a prayer rope (Russian: chotki; Greek: komvoskini), which is a cord, usually woolen, tied with many knots. The person saying the prayer says one repetition for each knot. It may be accompanied by prostrations and the sign of the cross, signaled by beads strung along the prayer rope at intervals. People who say the prayer as part of meditation often synchronize it with their breathing; breathing in while calling out to God and breathing out while praying for mercy.

Monks often pray this prayer many hundreds of times each night as part of their private cell vigil ("cell rule"). Under the guidance of an Elder (Russian Starets; Greek Gerondas), the monk aims to internalize the prayer, so that he is praying unceasingly. St. Diadochos of Photiki refers in On Spiritual Knowledge and Discrimination to the automatic repetition of the Jesus Prayer, under the influence of the Holy Spirit, even in sleep. This state is regarded as the accomplishment of Saint Paul's exhortation to the Thessalonians to "pray without ceasing" (1 Thessalonians 5:17).

Levels of the prayer 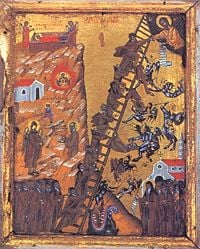 Icon of The Ladder of Divine Ascent (the steps toward theosis as described by St. John Climacus) showing monks ascending (and falling from) the ladder to Jesus.

The early Church fathers condemned elaborate phraseologies of prayer for one word was enough for the publican, and one word saved the thief on the cross. They only uttered Jesus' name by which they were contemplating God. As general guidelines for the practitioner, different number of levels (three, seven, or nine) in the practice of the prayer are distinguished by Orthodox fathers. They are to be seen as being purely informative, because the practice of the Prayer of the Heart is learned under personal spiritual guidance in Eastern Orthodoxy which emphasizes the perils of temptations when it's done by one's own. Thus, Theophan the Recluse, a nineteenth century Russian spiritual writer, talks about three stages:[3]

Others, like Father Archimandrite Ilie Cleopa, one of the most representative spiritual fathers of contemporary Romanian Orthodox monastic spirituality, talk about nine levels. They are the same path to theosis, more slenderly differentiated:

In its more advanced use, the monk aims to attain to a sober practice of the Jesus Prayer in the heart free of images. It is from this condition, called by Saints John Climacus and Hesychios the "guard of the mind," that the monk is said to be raised by the Divine grace to contemplation.

Due to the flexibility of the practice of the Jesus Prayer, there is no imposed standardization of its form. The prayer can be from as short as "Have mercy on me" ("Have mercy on us"), or even "Jesus," to its longer most common form. It can also contain a call to the Theotokos (Virgin Mary), or to the saints. The single essential and invariable element is Jesus' name. Some of the variants of the prayer include: