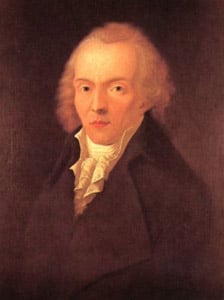 Jean Paul (March 21, 1763 – November 14, 1825), born Johann Paul Friedrich Richter, was a German writer, best known for his humorous novels and stories. Jean Paul was influenced by his reading of satirists Jonathan Swift and Laurence Sterne, as well as the sensual rationalism of Helvetius and Baron d'Holbach. His works were immensely popular during the first two decades of the nineteenth century. They formed an important link between the eighteenth century classicism and the nineteenth century Romanticism that would follow. While known for his humorous novels, Paul liked to use the theme of the double, which would later become prevalent in the works of E.T.A. Hoffmann and Fyodor Dostoevsky. The double reflects the nature of human relationships, as expressed in the Biblical Cain and Abel story, in which two brothers must find a way to reconcile not only their differences but also their similarities, their common shared humanity.

Jean Paul was born at Wunsiedel, in the Fichtelgebirge Mountains (Bavaria). His father was a schoolmaster and organist at Wunsiedel, but in 1765 he became a pastor at Joditz near Hof, Germany, and in 1776 at Schwarzenbach, where he died in 1779. After attending the gymnasium at Hof, Richter went to the University of Leipzig in 1781. His original intention was to enter his father's profession, but theology did not interest him, and he soon devoted himself wholly to the study of literature. Unable to maintain himself at Leipzig he returned in 1784 to Hof, where he lived with his mother. From 1787 to 1789 he served as a tutor at Tüpen, a village near Hof, and from 1790 to 1794 he taught the children of several families in a school he had founded in Schwarzenbach.

Richter began his career as a man of letters with Grönländische Prozesse (“Greenlandic Processes”) and Auswahl aus des Teufels Papieren (“Selection from the Devil's Papers”), the former of which was issued in 1783–1784, the latter in 1789. These works were not received with much favor, and in later life Richter himself had little sympathy with their satirical tone. His next book, Die unsichtbare Loge (“The Invisible Lodge”), a romance, published in 1793, had all the qualities which were soon to make him famous, and its power was immediately recognized by some of the best critics of the day.

Encouraged by the reception of Die unsichtbare Loge, he sent forth in rapid succession Hesperus (1795)—which became the greatest hit since Johann Wolfgang von Goethe's Die Leiden des jungen Werthers (“The Sorrows of Young Werther”) and made Jean Paul famous—,Biographische Belustigungen unter der Gehirnschale einer Riesin (“Biographical Amusements under the Brainpan of a She-giant”) (1796), Leben des Quintus Fixlein (“Life of Quintus Fixlein”) (1796), Blumen- Frucht- und Dornenstücke, oder Ehestand, Tod und Hochzeit des Armenadvokaten Siebenkäs (“Flower, Fruit, and Thorn Pieces, or, The Married Life, Death, and Wedding of Advocate of the Poor Siebenkäs”) (1796–1797), Der Jubelsenior (“The Jubilee Senior”) (1798), and Das Kampaner Tal (“The Campanian Valley”) (1797). This series of writings won for Richter an assured place in German literature, and during the rest of his life every work he produced was welcomed by a wide circle of admirers. This "second period" of his work was characterized by an attempt to reconcile his earlier comic realism with his own sentimental enthusiasm. After his mother's death he went to Leipzig in 1797, and in the following year to Weimar, where he had much pleasant intercourse with Johann Gottfried Herder, by whom he was warmly appreciated. He did not become intimate with Goethe and Friedrich Schiller, to both of whom his literary methods were repugnant, but in Weimar, as elsewhere, his remarkable conversational powers and his genial manners made him a favorite in general society. In 1801 he married Caroline Meyer, whom he met in Berlin in 1800. They lived first at Meiningen, then at Coburg, Germany, and finally, in 1804, they settled at Bayreuth.

Here Richter spent a quiet, simple, and happy life, constantly occupied with his work as a writer. In 1808 he was fortunately delivered from anxiety about outward necessities by the prince-primate, Karl Theodor von Dalberg, who gave him a pension of a thousand forms. Before settling at Bayreuth, Richter had published his most ambitious novel, Titan (1800–1803), which was followed by Flegeljahre (“The Awkward Age”) (1804–1805). He regarded these two works as his masterpieces. His later imaginative works were Dr. Katzenbergers Badereise (“Dr. Katzenberger's Spa Voyage”) (1809), Des Feldpredigers Schmelzle Reise nach Flätz (“Army Chaplain Schmelzle's Voyage to Flätz”) (1809), Leben Fibels (“Life of Fibel”) (1812), and Der Komet, oder Nikolaus Markgraf (“The Comet, or Nikolaus Markgraf”) (1820–1822). In Vorschule der Aesthetik (“Preschool of Aesthetics”) (1804), he expounded his ideas on art, he discussed the principles of education in Levana, oder Erziehungslehre (“Levana, or, Doctrine of Education”) (1807), and the opinions suggested by current events he set forth in Friedenspredigt (“Piece Sermon”) (1808), Dämmerungen für Deutschland (“Dawn for Germany”) (1809), Mars und Phöbus Thronwechsel im Jahre 1814 (“Mars's and Phoebus's Throne Change in the Year 1814”) (1814), and Politische Fastenpredigen (“Political Fast Sermons”) (1817). In his last years he began Wahrheit aus Jean Pauls Lebens (“The Truth from Jean Paul's Life”), to which additions from his papers and other sources were made by C. Otto and E. Fürster after his death. In 1821 Richter lost his only son, a youth of the highest promise; and he never quite recovered from this shock. He lost his sight in 1824. He died of dropsy at Bayreuth, on November 14, 1825.

Characteristics of His Work

Schiller said of Richter that he would have been worthy of admiration if he had made as good use of his riches as other men made of their poverty. And it is true that in the form of his writings he never did full justice to his great powers. In working out his conceptions he found it impossible to restrain the expression of any powerful feeling by which he might happen to be moved. He was equally unable to resist the temptation to bring in strange facts or notions which occurred to him. Hence every one of his works is irregular in structure, and his style lacks directness, precision, and grace. But his imagination was one of extraordinary fertility, and he had a surprising power of suggesting great thoughts by means of the simplest incidents and relations. The love of nature was one of Richter's deepest pleasures; his expressions of religious feelings are also marked by a truly poetic spirit, for to Richter visible things were but the symbols of the invisible, and in the unseen realities alone he found elements which seemed to him to give significance and dignity to human life. His humor, the most distinctive of his qualities, cannot be dissociated from the other characteristics of his writings. It mingled with all his thoughts, and to some extent determined the form in which he embodied even his most serious reflections. That it is sometimes extravagant and grotesque cannot be disputed, but it is never harsh or vulgar, and generally it springs naturally from the perception of the incongruity between ordinary facts and ideal laws. Richter's personality was deep and many-sided; with all his willfulness and eccentricity, he was a man of a pure and sensitive spirit with a passionate scorn for pretence and an ardent enthusiasm for truth and goodness.

During his life time, Jean Paul was a bestselling author. After his death, however, his popularity faded away. This might also have been caused by the negative verdicts of Goethe and Schiller on his works. Since the twentieth century, he is again counted among the greatest German writers, though he is considered difficult to read because of his exuberant style and satirical footnotes. Strongly influenced by the English comic tradition of Sterne and Smollett, he does not belong to the literary canon that is usually read in the Gymnasium.

Richter's Sämtliche Werke (“Complete Works”) appeared in 1826–1828 in 60 volumes, to which were added five volumes of Literarischer Nachlass (“Literary Bequest”) in 1836–1838; a second edition was published in 1840–1842 (33 volumes); a third in 1860–1862 (24 volumes). The last complete edition is that edited by Rudolf von Gottschall (60 parts, 1879). Editions of selected works appeared in 16 volumes (1865), in Kürschner's Deutsche Nationalliteratur (edited by P. Nerrlich, six volumes), among others. The chief collections of Richter's correspondence are: