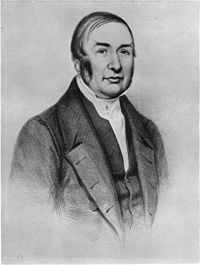 James Braid (1795 – March 25, 1860) was a Scottish neurosurgeon who coined the term and invented the procedure known as hypnotism. He rejected the belief that cures such as those achieved by Franz Mesmer were due to animal magnetism. He recognized the veracity of the phenomena but believed them to be caused by suggestion. He developed the technique of relaxation and eye-fixation, known as "Braidism," which results in the hypnotic trancelike state. Braid's work led to the development of hypnosis as a medical technique, particularly in the treatment of mental disorders through the work of French practitioners such as Jean-Martin Charcot and Pierre Janet, which has proved valuable in restoring psychological health for many.

James Braid was born in Rylawhouse, Fife, Scotland in 1795. He was educated at the University of Edinburgh, where he finished medical school. He specialized in surgery and wrote on orthopedic surgery, the treatment of club foot, squint, and other surgical topics. He published several articles in the Edinburgh Medical and Surgical Journal.

After briefly practicing medicine at Leads-Hillin in 1841 in Lanarkshire, Scotland, he moved to Manchester, England, where he lived and worked for the rest of his life. He opened a successful surgical practice there.

Braid became interested in mesmerism in November 1841, when he observed demonstrations given by a traveling mesmerist named Charles Lafontaine (1803–1892). He initially rejected Lafontaine as a charlatan, but later became interested in the phenomenon and dedicated his whole life to the search of the dynamics behind it. He experimented on himself, and gave lectures encouraging open discussion and criticism.

In 1843, he published his Neurypnology: or the Rationale of Nervous Sleep, which became groundwork for later studies in hypnosis. In it, he used terms such as “hypnosis" and “hypnotist” for the first time. His second book was published in 1846, entitled The Power of the Mind over Body.

He continued to research and give lectures on hypnosis. On March 25, 1860, in Manchester, he died suddenly of a heart attack.

James Braid first witnessed the phenomenon of “hypnosis” in 1843, when he participated in a session by Swiss "magnetizer," Charles Lafontaine. Braid dismissed Lafontaine as a charlatan, writing, “That night I saw nothing to diminish, but rather to confirm, my previous prejudices” (Braid [1843] 1976).

Braid however continued to come to the sessions, and soon became impressed with magnetism:

At the next conversazione, six nights afterwards, one fact, the inability of a patient to open his eyelids, arrested my attention. I considered that to be a real phenomenon, and was anxious to discover the physiological cause of it. Next night, I watched this case when again operated on, with intense interest, and before the termination of the experiment, felt assured I had discovered its cause, but considered it prudent not to announce my opinion publicly, until I had had an opportunity of testing its accuracy, by experiments and observation in private (Braid [1843] 1976).

After only two years of his own research, Braid published Neurypnology: or the Rationale of Nervous Sleep in 1843, his first and only book-length exposition of his views. In it, he coined the words "hypnotism," "hypnotize," and "hypnotist." Braid thought of hypnotism as producing a "nervous sleep" which differed from ordinary sleep. The most efficient way to produce it was through visual fixation on a small bright object held eighteen inches above and in front of the eyes. Braid regarded the physiological condition underlying hypnotism to be the over-exercising of the eye muscles through the straining of attention:

[The] inability of the patient to open his eyes was caused by paralyzing the levator muscles of the eyelids, through their continued action during the protracted fixed stare, and thus rendering it physically impossible for him to open them (Braid [1843] 1976).

Braid completely rejected Franz Mesmer's idea that a magnetic fluid caused hypnotic phenomena, because anyone could produce them in "himself by attending strictly to the simple rules" that Braid laid down. His experiments usually consisted of a client staring at a small bright object, between 8 and 16 inches from his nose, which was held by Braid. After few minutes of staring at the object, the client’s eyelids would spontaneously close. Braid concluded that the phenomenon was a form of sleep, so he named the phenomenon after Hypnos, the Greek god of sleep.

By 1848, Braid gradually came to realize that the hypnotic state could be induced without sleep, and that it is actually associated with suggestibility. He thus tried to rename the state as monoideism, but it was too late—the term “hypnosis” was already widely accepted.

As a medical doctor, Braid's interest in the phenomenon he called "hypnosis" was in terms of its potential for curing, or at least alleviating, painful diseases. He did report a number of successful instances of the use of hypnosis in treating clients, although he was less successful than others who tried the technique to control pain. However, James Braid did not found a school of thought nor did he widely propagate his ideas. His influence waned after his death and the center of research on hypnosis gradually moved from Scotland to France. His book has remained influential, however, and his legacy has continued to live in the term he coined—“hypnosis.”