Ivor Armstrong Richards (February 26, 1893 – September 7, 1979) was an influential English literary critic and rhetorician. His books, especially The Meaning of Meaning, Principles of Literary Criticism, Practical Criticism, and The Philosophy of Rhetoric, were among the founding documents of the New Criticism, and most of the eminent New Critics were Richards' students. New Criticism, along with Russian Formalism, sought to change the approach to the study of literature from historical and biographical to analysis of the text itself and the intertextual comparison. In English-speaking countries, New Criticism is generally considered the beginning of modern literary criticism, and Richards is one of the founders of the contemporary study of literature in English. Richards believed in the role that poetry plays in the period of modernism when social and moral authority had come into question. For him, poetry was the place where the balancing of these concerns took place. In this regard, Richards assigns to poetry the place that had traditionally been assigned to mythology, which was mythic thought in poetic form.

Richards began his career without formal training in literature; Richards studied philosophy ("moral sciences") at Cambridge University. This may have led to one of Richards' assertions for the shape of literary study in the twentieth century, namely that literary study cannot and should not be undertaken as a specialization in itself, but instead studied alongside a cognate field (philosophy, psychology, rhetoric, etc.).

Richards' earliest teaching appointments were in the equivalent of what might be called "adjunct faculty" positions; Magdalene College at Cambridge would not salary Richards to teach the new and untested field of English literature. Instead, Richards collected tuition directly from the students as they entered the classroom each week.

He became professor of English at Harvard University in 1939, where he taught for a quarter century. He returned to Cambridge, where he died in 1979 following a teaching trip to China. 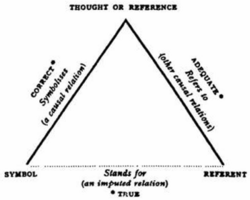 Ogden Semiotic Triangle (aka Semantic Triangle). From The Meaning of Meaning subtitled A Study of the Influence of Language upon Thought and of the Science of Symbolism, 1923, was co-authored by C. K. Ogden and I. A. Richards, Magdalene College, University of Cambridge

Richards' life and influence can be divided into periods, which correspond roughly to his intellectual interests. In many of these achievements, Richards found a collaborator in C. K. Ogden. Ogden served as his collaborator on three of the most important projects of Richards' life.

In Foundations of Aesthetics (co-authored by Richards, Ogden, and James Woods), Richards maps out the principles of aesthetic reception which lay at the root of Richards' literary theory (the principle of "harmony," or balance of competing psychological impulses). Additionally, the structure of the work (surveying multiple, competing definitions of the term "aesthetic") prefigures his work on multiple definition in Coleridge on Imagination, in Basic Rules of Reason and in Mencius on the Mind.

In The Meaning of Meaning: A Study of the Influence of Language upon Thought and of the Science of Symbolism, Richards and Odgen work out the triadic theory of semiotics which, in its dependence on psychological theories, prefigures the importance of psychology in Richards' independently authored literary criticism. Richards' semiotics has been compared to that of Ferdinand de Saussure.

Saussure's theory of linguistics distinguished between the symbolic register and the "real world." Language, the symbolic order, is arbitrary, with no inherent meaning in the words themselves. Meaning depends on the relationship to things. Richards' system was a triad that included not only the symbolic and the real, but the conceptual world of mind, which are neither "real" nor merely symbols. Many current semioticians (notably Umberto Eco) salute this work as a vast improvement on the dyadic semiotics of Saussure.

Finally, in works such as, The General Basic English Dictionary and Times of India Guide to Basic English, Richards and Ogden developed their most internationally influential project—the Basic English program for the development of an international language based with an 850-word vocabulary. Richards' own travels, especially to China, made him an effective advocate for this international program.

At Harvard, he took the next step, integrating new media (television, especially) into his international pedagogy.

Richards' impact on the field of literary criticism was immense. Adams calls it as influential as that of T.S. Eliot.[1] Like Matthew Arnold, he was interested in the experience of reading poetry and the impact of poetry on the reader. In particular, he believed that "balancing and organizing conflicting impulses is characteristic of the experience of poetry and that this experience has particular importance in an age during which canons of moral and social authority are crumbling." [1]

Richards served as mentor and teacher to other prominent critics. Richards was a contemporary of F. R. Leavis. William Empson studied under Richards at Cambridge before Empson’s banishment. Richards’ influence extended beyond the English critics. His work, particularly his Principles and Practical Criticism, impacted the American critics of the New Criticism as well. His classroom experiments, removing the authorial and contextual information from several literary works to gauge the impact this information had on their interpretation of the works, was one of the influences that led to a new view of criticism. In this experiment, Richards removed recourse to the usual targets of criticism, like authorial intent. By forcing students to simply focus on the words on the page, he helped to create the emphasis on “close reading” and on the formal aspects of the text that had previously been subsumed in the focus on content. This provided some of the impetus for the formalism of New Critics like Cleanth Brooks, John Crowe Ransom, and William K. Wimsatt, among others.

In using this method, Richards was not justifying a new hermeneutic. Instead, he was doing something unprecedented in the field of literary studies: He was interrogating the interpretive process itself, by analyzing the self-reported interpretive work of students. (To that end, his work seems a historical opening to the work done in English Education and Composition [Flower & Hayes] as they engage empirical studies.)

Richards was deeply invested in understanding literary interpretation from an individual, psychological perspective. He read deeply in psychological theory of the day, finding the psychological work of Sir Charles Sherrington most useful for his own work. While his theories of poetic interpretation and poetic language have been surpassed, his initial impulses (to ground a theory of interpretation in both the theoretical language of psychology and aesthetic theory, as well as in empirical work) shaped twentieth century literary studies into what it is today.

Retrieved from https://www.newworldencyclopedia.org/p/index.php?title=I._A._Richards&oldid=1009055
Categories:
Hidden category:
This page was last edited on 23 January 2018, at 15:53.
Content is available under Creative Commons Attribution/Share-Alike License; additional terms may apply. See Terms of Use for details.