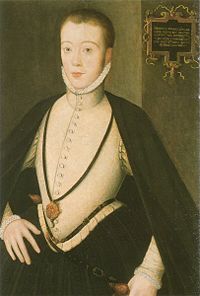 Henry Stuart, Duke of Albany (December 7, 1545 – February 9 or 10, 1567), commonly known as Lord Darnley, king consort of Scotland, was the first cousin and second husband of Mary, Queen of Scots. His murder prevented him from developing a meaningful role for himself in what was the unusual position of a male consort of a female ruler. Although his name found its way into literature, his legacy is shrouded in intrigue and in rumors surrounding the events leading up to his murder and the event itself. Men often dislike being in the shadow of a more powerful woman, even when she is their wife. When he married, Darnley was too immature to cope with his situation and died before he could prove himself capable of much more than jealousy of his wife’s male secretary, and of generally conducting himself in a petulant, high-handed way. He is, though, reputed to have had courtly manners. His name will always be associated with this volatile period in Scotland's history when the nation was struggling to maintain independence from England less from the threat of invasion than from what seemed to some to be a natural union. In fact, Darnley's son, James, became James VI of Scotland in 1567 and in 1603—because of Darnley's descent from Henry VII of England—he also became James I of England, ending Scottish independence (although technically the two kingdoms were united). The House of Stuart produced four kings until 1688, when the Glorious Revolution took place, after which Stuart pretenders continued to claim the thrones of England and of Scotland.

Darnley was born in 1545, at Temple Newsam, Leeds, West Yorkshire, England, the son of the 4th Earl of Lennox, and his wife, Margaret Douglas. He was related to his future wife in at least three ways: they shared a grandmother in Margaret Tudor, putting both Mary and Darnley high in the line of succession for the English throne; Darnley was a descendant of a daughter of James II of Scotland and thus also in line for the throne of Scotland; and Darnley's family surname was due to a much more ancient connection to his male-line ancestor, Alexander Stewart, 4th High Steward of Scotland. On their marriage, which took place July 29, 1565 in the chapel of Palace of Holyroodhouse in Edinburgh, Darnley was given the title of "King of Scots," but he was a king consort only, with no royal powers.

Marriage to Mary, Queen of scots

His marriage to Mary, Queen of Scots, was a disaster. Darnley was younger than Mary and not particularly mature for a 19-year-old (similar case occurred when Mary I of England married Philip II of Spain). He possessed a fondness for cross-dressing. He was unpopular with the other nobles and had a mean and violent streak. Within a short time, Mary became pregnant, but Darnley grew more and more demanding. His jealousy of Mary's private secretary, David Rizzio, culminated in the bloody murder of the latter by Darnley and a group of his supporters, in the presence of the queen herself at Holyrood Palace. Archibald Douglas, Parson of Douglas subsequently secured pardons for all those involved. The popularity of both Mary and Dranley also suffered because they were Roman Catholics while the country was now Protestant. 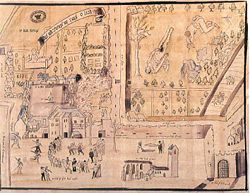 The murder scene, a contemporary drawing of Kirk o'Field, Edinburgh.

Following the birth of their son, the future James VI of Scotland and James I of England, the succession was more secure; in late 1566 and early 1567, Darnley and Mary appeared to be close to reconciliation, as she was often seen visiting his chambers. But Darnley was unpopular and petulant and offended many who should have been his natural supporters. On February 10, 1567, the bodies of Darnley and servant at the time were discovered in the gardens of the Hamiltons' house, Kirk o' Field, Edinburgh, where they had been staying. A violent explosion had occurred that night at the house, but the evidence pointed to Darnley's having escaped that attempted assassination only to be murdered when he got outside.

Suspicion fell on James Hepburn, 4th Earl of Bothwell and his supporters, notably Archibald Douglas, Parson of Douglas whose shoes were found at the scene, and upon Mary herself. Bothwell later abducted Mary, where he kept her for a week, at the end of which she had agreed to marry him, under pressure, duress, or desperation (Mary's power as a lone Queen was not respected since she was a woman, and Bothwell had proven himself loyal to Scotland for the past 10 years). There were also speculation that Bothwell had raped Mary, giving her no choice but to marry him. Darnley's death was a key event in the downward spiral that led to her loss of the Scottish crown.

Darnley was a royal consort at a tine when the role of a man whose wife was sovereign was not very clearly defined. If a Queen consort’s role was to look attractive, to entertain distinguished guests and to produce an heir, what was that of a male consort? Producing an heir applied but most of the other roles described above were seen as inappropriate for a man. He hardly had a chance to develop a meaningful or useful role, due to his murder. His legacy has tended to be shrouded in speculation about the events surrounding his own demise. At the time, no one really gave much thought to what the role of a consort-king might be. His story has become the subject of works of fiction and of drama, including Gulland (1903) and Dukthas (1994) among others. Darnley's son, James, was destined to become King of Scotland and of England, bringing about the union of the two kingdoms.

Retrieved from https://www.newworldencyclopedia.org/p/index.php?title=Henry_Stuart&oldid=683444
Categories:
Hidden category:
This page was last edited on 2 April 2008, at 17:06.
Content is available under Creative Commons Attribution/Share-Alike License; additional terms may apply. See Terms of Use for details.